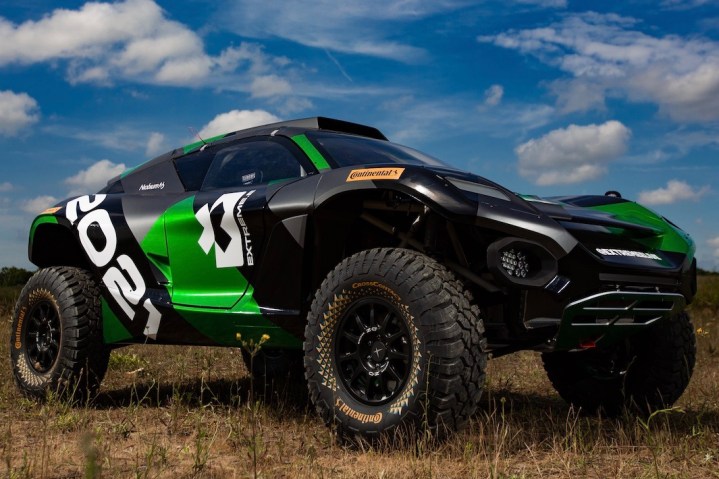 Formula E has dropped hints about a racing series for electric SUVs, called Extreme E, to along with its current single-seater race series. At the 2019 Goodwood Festival of Speed, Formula E revealed the racer that all Extreme E teams will use. It’s called Odyssey 21 and will hit off-road race courses around the world in 2021.

The Odyssey 21 doesn’t look like any electric SUV currently in production, but it does resemble off-roaders used in races like the Baja 1000 and Dakar Rally. It was built by Spark Racing Technologies, the same company that manufactures Formula E’s single seaters, with a battery pack from Williams Advanced Engineering, the current Formula E battery supplier. As with Formula E’s single-seat race cars, the idea was to standardize as many components as possible to keep costs down.

The electric SUV racer boasts 550 horsepower, allowing it do zero to 62 mph in 4.5 seconds, according to Formula E. That’s about the same as a Jaguar I-Pace and certain versions of the Tesla Model X are quicker. But those road-legal models can’t match the Odyssey 21’s off-road performance. Formula E claims it can tackle gradients of up to 130%. The racer also boasts special Continental tires designed to handle extreme terrain.

As with Formula E, Extreme E race teams won’t be allowed to change the basic chassis or battery pack, but they will be allowed to develop their own powertrains. Extreme E will also let teams modify some parts of the bodywork. Many automakers currently racing in Formula E have electric SUVs in production, or at least in development. Jaguar already has a race series for its I-Pace, operated in concert with Formula E. The opportunity to make the Odyssey 21 racer look like their production models could help convince those automakers to make the jump to Extreme E.

The name Extreme E isn’t an exaggeration. The series is expected to feature off-road tracks in exotic locations like the Arctic and the Himalayas. A press release announcing the Odyssey 21 electric SUV stated that the goal of Extreme E is to “highlight the impact of climate change on some of the world’s most fragile ecosystems.” A pack of electric SUVs ripping around, not to mention legions of spectators, media, and team personnel, seems like it could be pretty disruptive to those ecosystems, though. Regardless, Extreme E gives Formula E a way to capitalize on the electric SUV trend, and maintain its status as the biggest name in electric racing.