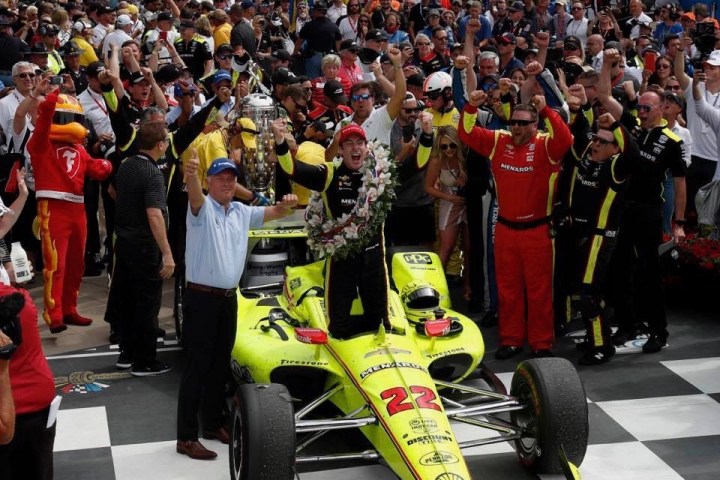 5G promises faster speeds, so what better place to use it than at a racetrack? Ahead of the 2019 Indianapolis 500, Team Penske used Verizon’s 5G network to send data from race cars on the track to the pit wall in order to fine-tune car setups. Penske driver Simon Pagenaud won the legendary race, bringing the team’s win tally to 18 — a number unmatched in Indy 500 history.

Most race teams use wireless networks to pull vast amounts of data from cars on the track. That data is used to monitor the health of the car, find areas where performance can be improved, or to highlight drivers’ mistakes. Drivers may be alone in the cockpit of an IndyCar, but data connections allow the team to digitally look over their shoulders. While the 5G network is rolling out slowly for average phone users, Verizon’s sponsorship of Team Penske ensures the race team’s access to the fastest speeds.

One of the ways Team Penske uses that high-speed network is for capturing video, according to Verizon. In practice sessions for the 2019 Indy 500, the team streamed video from cameras on a car to the spotter stand, using it to analyze the driver’s performance and make changes to the car. What used to take hours now happens in nearly real time, according to Verizon. The team can even overlay feeds from multiple drivers’ previous laps to make comparisons, the company said. Cars can be brought into the pits for setup changes, then sent back out. That’s something that wasn’t possible before 5G, according to the team.

“Prior to 5G, we’d capture video of a six- to seven-hour practice session, store it on a memory card, and then go back to the garage and analyze that information after practice,” Carlos Gutierrez, an engineer with Team Penske, said in a statement. “With , we have that video content almost instantly, so we can tweak performance on a run-by-run basis instead of the following day. The faster this data gets to the team, the faster we can help the driver on the next lap and gain a competitive edge.”

Verizon believes 5G could also improve the experience of Indy 500 fans by providing the capability to stream video from multiple in-car camera angles, all in 4K. That setup isn’t ready yet, however. Even if that quantity of streamable video does become available, fans will need 5G-capable smartphones and access to a 5G network to get it.

Fast cars demand fast data speeds. The slowest car on the Indy 500 grid this year qualified at just over 227 mph on the 2.5-mile oval track. After 500 miles of driving Penske’s Simon Pagenaud beat Alexander Rossi to the checkered flag by just 0.2 second in the race, a late pass securing victory for the Frenchman. It was the first Indy 500 win for Pagenaud, but the 18th for Penske, which also won in 2018 with driver Will Power.