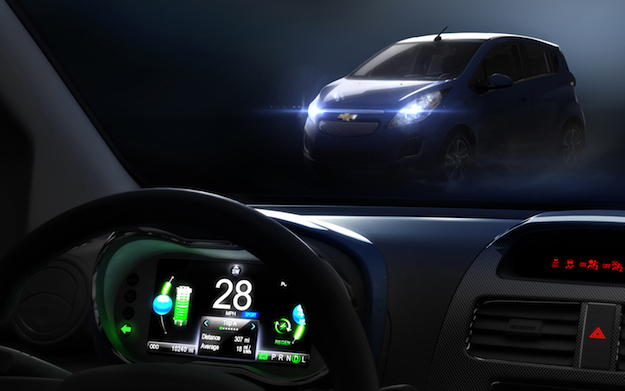 Two of the biggest issues electric vehicle (EV) opponents have with battery-powered cars are the limited range pure EVs provide, and the ability to easily locate charging stations. For many, the limited range (relative to gasoline-powered vehicles) is enough to deter potential customers from purchasing an electric vehicle and has even spurred the term “range anxiety.” Likewise, the lack of infrastructure in many cities has no doubt caused people to think twice before adopting this new and exciting technology.

Recently, General Motors, through its OnStar subsidiary, announced the introduction of two new apps that would help EV drivers with these issues. The first is named Spark EV Waypoint app that, according to Chevrolet, will integrate into OnStar’s RemoteLink app, and apart from sporting a terribly boring name, actually sounds like it will prove quite useful to EV owners. Essentially the way it works seems simple enough: Once you’ve entered in a destination, the app runs a diagnostic on your vehicle to determine one of four things:

The app essentially lets drivers know how long their route will take and, more importantly, how much time it will take to charge the vehicle should the need to stop at a charging station (waypoint) arise, or once the final destination has been reached.

“The Spark EV Waypoint tab aims to instill confidence in drivers who are not sure if they’ll be able to reach their destination on a single charge,” said Paul Pebbles, global manager, OnStar Electric Vehicle and Smart Grid Services in a press release. “It’s also for drivers who know they’ll be traveling beyond a single charge range.”

The Spark EV Waypoint app is expected to coincide with the launch of the 2014 Spark EV, which itself is set to debut at the LA Auto Show later this month.

EVs still have a long way to go before they truly become mainstream and move away from the niche segment they occupy now, but little, cool, and helpful innovations like these will undoubtedly do much to aid in the transition from gasoline to electric. And with GM recently announcing its ambition to have 500,000 electrified vehicles on the road by 2017, anything to make it easier on the consumer to own and operate an EV is a great thing in our books.