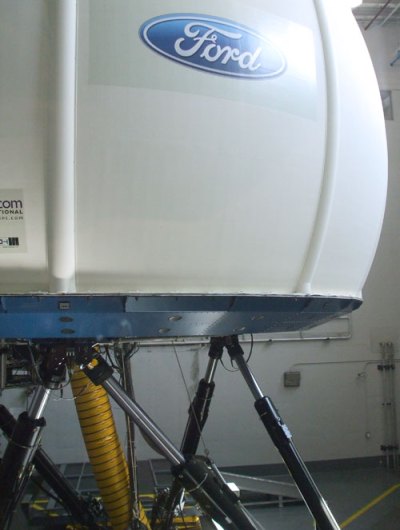 This article is part of our continuing series, Detroit Goes Digital, that goes behind the scenes in Ford’s advanced virtual reality design labs.

Poking your head around a virtually rendered car is one thing. Putting it in motion is another. Although Ford doesn’t attempt to virtually model the experience of driving a car before building it – save that for over five miles of grueling tarmac at the Dearbon Development Center – it does employ a virtual driving simulator to help find out how people drive, and build cars accordingly.

How do people react when they’re sleepy? When they’re distracted by cell phones? If you build a device to alert drivers before an imminent collision, which cue elicits the quickest reaction? When you’re building an early-warning system for highway collisions or an in-car entertainment system like Sync, these aren’t novel academic questions, they’re potentially the difference between life and death at 80 miles per hour. Ford has unearthed the answers to all of them in its Virtual Test Track Experiment, known internally as VIRTTEX.

Essentially a giant sphere on hydraulic stilts with a stripped-down car inside, VIRTTEX acts as a completely immersive VR test bed. Powerful hydraulics perfected by flight simulators pitch and roll the car around to simulate the forces of acceleration, braking and lane changes. High-definition projectors from the home theater market plaster the walls of a dome around a virtual car with a panoramic expanse of virtual terrain. Brawny CPUs from the 3D gaming world drive all the on-screen action and dot the virtual streets with other drivers. Together, they put test drivers in an environment that looks, sounds and feels like driving a car. Gamers will be disappointed to find themselves on a particularly yawn-worthy virtual stretch of I-94, not the buzzing gang-addled cities of Grand Theft Auto, but for testing purposes, it’s exactly what researchers need.

Miniature cameras peep on the driver’s every movement and feed it up to the control room, where operators keep an eye on the scenario and intervene with God-like abilities, like cueing a semi to pass then abruptly cut off the driver. With every moment recorded, researchers can later dissect the vital five seconds before a crash with millisecond accuracy, measuring the time from brake lights ahead to a foot on the brake pedal, or how long those eyelids were really shut.

Ford has loaded VIRTTEX’s swiveling dome with tired drivers to determine the effects of driving on the brink of sleep, with teens to determine how inexperienced drivers react differently, and with cell-savvy adults to determine what danger dialing and driving really poses. The results show up in technologies like Ford’s collision warning system, which sounds a beep and illuminates a red light to warn drivers of an impending collision, and Sync, which locks functions that would require looking at an LCD screen when the car is in motion, in favor of voice commands.

Follow the links below to check out our other articles on Ford’s new technology and find out how the age of digital design is changing the hunk of steel and rubber in your driveway for the better.