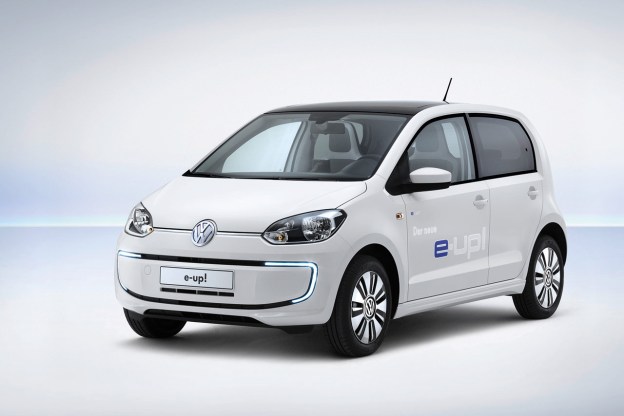 Volkswagen is ready to launch the production version of its e-up! electric car.

VW will be showing the tiny EV at its Annual Press and Investors Conference in Wolfsburg, Germany before a public debut at the Frankfurt Motor Show in September.

The e-up! is based on Volkswagen’s up! city car, a tiny hatchback that shares motorcycle parking spaces with the Scion/Toyota iQ and smart fortwo. Unlike those fashion accessories, the up! is available with four doors, making it a true four-seater.

Motivation comes from an 80 horsepower electric motor and 18.7-kWh lithium-ion battery pack. Volkswagen says the e-up! will do 0 to 100 kph (0-62 mph) in 14 seconds and reach a top speed of 84 mph. So the e-up! isn’t really a Tesla Model S competitor.

Still, the VW wouldn’t embarrass itself in a slow-motion drag race with the equally small Mitsubishi i-MiEV, which does 0 to 60 mph in 13 seconds and has an 80 mph top speed.

Unlike its performance, the e-up!’s range should impress. Volkswagen says it will go 93 miles on a charge, a big increase over the 80-mile range quoted in early reports. It also eclipses the Nissan Leaf’s EPA-rated 74-mile range.

However, since the e-up! wasn’t tested according to the EPA methodology, that number could drop if the e-up! ever makes it to the United States.

The e-up! also comes with a nifty Combined Charging System (CCS). Like the chargers currently available for the Leaf and Model S, CCS can do a 30-minute quick charge, in this case restoring 80 percent of the battery’s power. However, it can also work with either DC or AC outlets, giving the VW driver more options.

Volkswagen hasn’t said anything about bringing the e-up! to the U.S. but, considering that VW doesn’t even sell the conventional up! here, it seems like a long shot.

Would you consider buying this mini VW EV with a maxi range? Tell us in the comments.