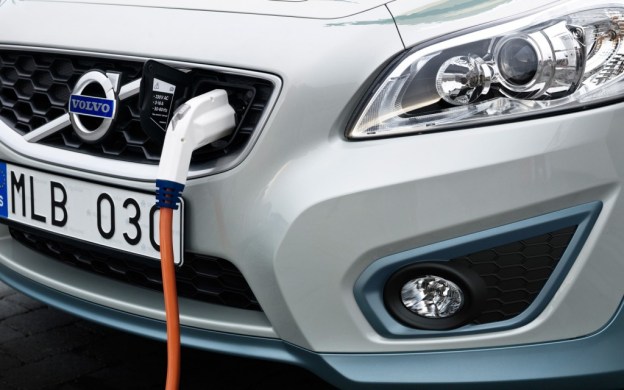 Volvo has a need for speed. No, the Swedish company known for safe and staid automobiles is not going after Ferrari, but it is trying to make the world a better place. Electric cars may not produce emissions, but they take hours to charge. Volvo hopes to cut that time to a slightly more reasonable 90 minutes with its new charging system.

The 440-volt, three-phase charging system uses a 32-amp power supply to achieve Volvo’s 90-minute target. The company says that in 30 minutes, the charger will give its prototype C30 Electric enough power to drive 50 miles.

Volvo says its charger allows EV owners to quickly “top up” their batteries with electricity once or twice a day, giving them enough range to get through the daily commute without a full charge.

It doesn’t take 90 minutes to fill a car with gasoline, but if Volvo delivers on its promise, it will have one of the fastest EV chargers on the market. It currently takes seven to 20 hours to charge a Nissan Leaf, the most popular EV currently available. Volvo says it would take 10 hours to charge a C30 from a standard, 220-volt European outlet.

Tesla Motors’ “Supercharger” reportedly adds 150 miles of range to a Model S (with an 85-kWh battery pack) in just a half hour, but it is unclear how that translates to other EVs.

Hydro-Quebec is working on a system that can charge an electric car in just five minutes, but it’s still under development.

The new charger is part of Volvo’s ongoing electric car field test. About 250 C30 Electrics were given to customers in Europe and China last fall, who will provide Volvo with valuable information on how EVs are used in everyday life. Volvo joins a growing cadre of carmakers, including Audi, BMW, and Honda, taking this focus group-on-steroids approach.

The C30 Electric produces 111 horsepower, and has a range of 93 miles. Since it’s based on Volvo’s pseudo-retro C30 hatchback, which will be phased out at the end of the 2013 model year, there is no chance of a production model. Instead, data gleaned from the C30 Electric will be used to develop future Volvo models.

In this case, the charging system may be what EV enthusiasts clamor for, not the car. If Volvo’s charger works as advertised, it could give drivers more flexibility and help ease the two major drawbacks of these cars: lack of range and long charging times.

The two problems are intertwined: reducing charging times means stopping to recharge more often won’t ruin a person’s day, and longer ranges mean drivers won’t have to worry as much about getting stuck.

It’s all about giving EV drivers some flexibility. Yes, most EVs can get a person to work or the local strip mall on one charge, but there isn’t much room for error. Electric cars will never be practical while their drivers fear traffic jams, detours, and power outages.