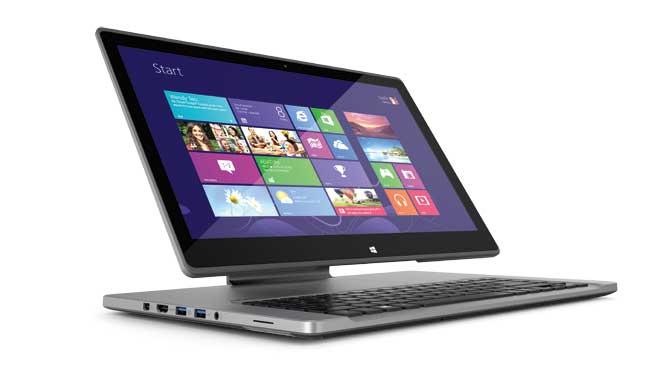 Check out our review of the Acer Aspire R7 hybrid all-in-one and tablet.

Acer dropped a design first at its event in New York City this morning: a laptop-tablet hybrid with a rotating display that can “float” above the keyboard. The Acer Aspire R7 is certainly unlike any notebook we’ve seen before with a unique “Ezel hinge” that allows the display to move above the keyboard, fold backwards into a presentation display, and even fold into a tablet. Of course, a device this futuristic even has a tie-in with Star Trek. We’ve got everything you need to know about this unique laptop.

As you can see, the aluminum unibody R7 doesn’t look like a regular notebook. It bears a resemblance to an all-in-one computer, but it’s meant to be portable. The Ezel hinge on the R7 allows it be to placed in four basic positions: 1) good-old fashioned clamshell notebook; 2) pad mode, in which the display slides over the keyboard to make it a tablet; 3) display mode, where the display flips over to position the screen facing away from the keyboard; and 4) Ezel mode, where the screen tilts and rises out above the hinge to bring the display closer for touch applications.

The display itself is 15.6 inches with a 1920 x 1080 full HD resolution touchscreen with a viewing angle of up to 178 degrees. The Ezel hinge is designed to be somewhat stiff to eliminate screen wobble when touching it, but Acer says it’s also easy enough to maneuver it into different positions with one hand.

The display attached via the Ezel hinge isn’t the only unique aspect of this 15-inch laptop. Did you notice that the backlit keyboard and trackpad are reversed? We’ve seen sliding displays before, but we have never seen the keyboard and trackpad change places on a notebook. The result is that the keyboard lacks a true palmrest and using the trackpad may require your hand to hover above with the keyboard to avoid accidentally hitting errant keys. Then again, maybe it’ll be fine. We’ll know how well this arrangement works once we fully review the R7.

The Acer Aspire R7 tips the scales at 5.29 pounds, which is a little hefty but still acceptable for a 15-inch notebook that measures 14.83 inches wide by 10.02 inches deep. The R7 is 0.81-inches at its slimmest point and 1.12-inches at its thickest. Tossing it into a standard notebook bag won’t be an issue, but you might want a shoulder strap with extra padding.

Despite the emphasis on the R7’s design, Acer didn’t forget to load it up with a decent amount of power on the inside. The R7 is equipped with an Intel Core i5 processor, 6GB of RAM, a 500GB hard drive, a 24GB solid-state drive for faster booting, and integrated Intel HD 4000 graphics. There are other models of the R7 coming soon that will include a more powerful Core i7 processor, Nvidia graphics, and larger solid-state drives.

It’s clear that one of Acer’s goals with the R7 is to make it very multimedia friendly. In addition to the large full HD display, the R7 features Dolby sound with four 8-watt speakers that automatically reverse when switching the display around, ensuring that the left and right speakers are always producing the correct sound. Acer’s also included dual microphones placed just beneath the spacebar. We’ll know if the sound of typing becomes an issue in video chats once we review the machine.

If you’re already salivating over the Aspire R7, you won’t have to wait too long to get one in your hands. The R7 is available for pre-order exclusively through Best Buy for $999 and it will begin shipping on May 17. The R7 was already spotted in a Star Trek teaser doubling as the Enterprise and now, thanks to a tie-in with the new movie “Star Trek Into Darkness” anyone who pre-orders the R7 from Best Buy between today and May 16 will receive a free download of the Star Trek video game. If you’ve already decided the R7 is your next laptop-tablet hybrid, you might as well get a free game, too.

Acer Swift Edge vs. Microsoft Surface Laptop 5
This 15-inch Dell laptop is just $250 today, but it’s selling fast
Best Chromebook deals: Get a new laptop from $99
This 15-inch Windows laptop is a great buy while it’s just $139
Get this HP gaming PC for $550, delivered for the holidays
Adobe Free Trial: Try Creative Cloud for free
IPVanish Free Trial: Try it for a month, no strings attached
How this new Quest VR app totally sold me on exercising in virtual reality
Walmart shoppers are loving this $159 11.6-inch 2-in-1 laptop
1-day sale drops this gaming laptop with an RTX 3050 Ti to $550
Google may have just fixed Chrome’s most annoying problem
Norton Antivirus Free Trial: Get a week of protection
ABCMouse Free Trial: Get your first month free