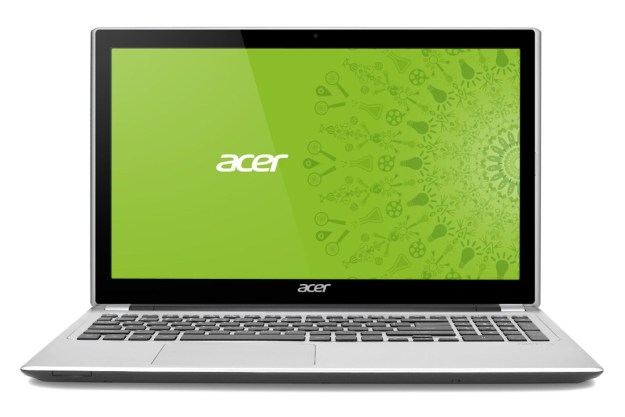 “Examining this laptop point by point, feature by feature, results in too few pros and many cons. Acer is offering too little laptop for too high a price.”

While the bulk of press attention has been on touch laptops with high price tags, Acer has decided to make touch available at a much lower price point. The Acer Aspire V5 Touch is another example of this effort. Based on the inexpensive almost-an-Ultrabook V5, this model provides touch functionality for as little as $730.

That’s a full $70 less than the listed retail price of its other cousin, the Acer Aspire M5 Touch, and is $20 less than the Toshiba Satellite S955, an entry-level Windows 8 laptop that doesn’t have a touchscreen at all.

Still, while $730 is an affordable price, it’s a long way from the low end of the market. Without a touchscreen, this model costs as little as $500, saving you a whole $220. Let’s see what, if anything, justifies that price gap.

Most of the Acer Aspire V5’s exterior and interior is coated in silver plastic that kind of resembles metal. Or perhaps it is silver metal that kind of resembles plastic. We’re leaning towards the second option, but the point is that that we’re not 100 percent sure. Material quality makes it instantly clear that this is an entry-level laptop.

Thankfully, the laptop’s tawdry appearance doesn’t translate to poor build quality. Though the thin chassis groans when handled roughly, it shows no obvious flex. Panel gaps are obvious, though not excessively large, and the lid is as firm as it needs to be. It’s the very picture of adequate – which, since some competitors don’t manage as well, is fine.

Connectivity comes via a single USB 3.0 port, two USB 2.0 ports, an HDMI port, and a combo headphone/microphone jack. There’s also a flash media slot and an optical drive. Considering competitors often include two USB 3.0 ports instead of one, this array of options is a bit below average.

A poor interface, plus a touchscreen

Keyboard quality is a low point of the V5. There’s plenty of space in this laptop’s interior (it’s a 15.6-inch model, after all), yet Acer hasn’t managed to squeeze in a full-size numpad. Indeed, a number of keys are downsized, including the left-side Tab, the Caps Lock and Shift keys, Esc, the function keys, and more.

Matters are made worse by key feel, or lack thereof. There is very little travel to each key and almost no tactile feedback besides an abrupt stop when a key bottoms out. Even definition between keys is low due to the squat, flat-face key caps. We found using the keyboard for long periods of time unpleasant.

In terms of backlighting, it’s included in the keyboard, but there are no brightness settings. However, brightness can be turned on and off via a keyboard shortcut. We found the light leak from beneath the key-caps distracting when using the laptop in an extremely dark environment.

Our tests of the V5 revealed a display almost identical to the one found in the more expensive M5. Normally, that might be a compliment, but the M5’s display wasn’t great. This panel offers low contrast, average black levels, and can render only 60 percent of the sRGB gamut.

This all translates to an experience that’s fine for basic Web browsing and productivity but that sucks the life out of movies and games. Dark scenes appear grayish rather than black, details are lacking, and colors often look washed out.

As with most laptops, a glossy display finish is the only option. Unfortunately, the backlight is not bright enough to defeat reflections in a brightly lit room, which makes the laptop difficult to use in any area where the user doesn’t also control the lighting.

The audio quality is average. There is no distortion at maximum volume, which is just loud enough to fill an office with sound. There is also no bass. The result is a tinny sound that works fine for simple videos and spoken-word podcasts, but falls apart whenever it’s asked to play music.

Ultrabooks tend to produce high heat temperatures, and while the V5 is not an Ultrabook, it’s not far from sliding into Ultrabook territory. We had expected the V5 to come close to an Ultrabook in terms of heat, yet it remained cool during our testing. At idle, it warmed to only 89.9 degrees Fahrenheit; and at load, we didn’t measure a temperature above 96 degrees Fahrenheit. Most of this heat was focused in one spot on the bottom of the chassis. The keyboard and touchpad area were rarely warmer than 90 degrees.

Sound testing didn’t reveal that any compromise had to be made to keep temperatures low. The maxim reading of 46.2 decibels is just barely louder than that of the Aspire M5 and quieter than other laptops we’ve recently tested. The whir of the fan is noticeable but usually isn’t distracting.

My, what a small battery

Though a big laptop, the 15.6-inch V5 ships with a small battery. Its tiny 37Wh unit is about as long and thick as four AA batteries laid end-to-end, which predictably resulted in lackluster battery life. Battery Eater’s load test emptied the battery in 1 hour and 22 minutes, while the light-load Reader’s test lasted just a hair over 4 hours. Web browsing tests consumed the battery in about 3 hours. These results are the worst we’ve encountered in some time.

It’s not as if a large battery would make the V5 an able travel companion, however. Its 15.6-inch frame and weight of just over 5 pounds makes it a poor choice for frequent jaunts across town or country. Acer offers this laptop in smaller sizes without the touchscreen, though those variants also suffer from poor endurance.

Power consumption, on the other hand, proved light. Our testing showed this laptop using as little as 11 Watts at Idle (with display at 50 percent brightness) and only 24 watts at load. It also used 23 watts while charging. All of these results are better than average.

Our review unit was received with nary a bit of bloatware in site. There’s no built-in third-party antivirus, and no desktop or Start screen apps of any kind, excluding those installed by Windows 8.

We found this unusual, but the laptop we received ran through a first-boot setup sequence when we unboxed it. That indicates it arrived as would any other shipped versions of this laptop. We certainly hope our review unit is representative of products sold to consumers. Acer’s bloatware situation was getting out of hand.

We received our V5 with a Core i5-3317U processor, 4GB of RAM, and a 500GB hard drive. It’s worth noting that these specifications partially excuse the higher price of the V5 Touch. Base models of this laptop come with second-generation Core processors and smaller hard drives.

Our performance testing revealed nothing unusual. SiSoft Sandra’s Processor Arithmetic benchmark reported a score of 37 GOPS, while 7-Zip turned in a combined score of 7,211 MIPS. Both figures are in line with the scores we’ve extracted from similarly equipped competitors.

PCMark 7 produced a score of 2,338, which is low and representative of the laptop’s reliance of integrated graphics and a standard mechanical hard drive. Most laptops that we’ve recently tested have scored higher.

Once again, graphics testing went as expected with 3DMark 06 and 3DMark 11 turning in respective scores of 3,931 and 553. This is in line with similar competitors and indicates a laptop that can play most modern 3D games only at low detail.

The Acer Aspire V5 is only competitive as an entry-level laptop. Jacking the price up to $730 without addressing battery life or performance has predictable results.

Touch is the justification for this model’s unusually high price, yet Acer hasn’t made any effort to integrate the touch experience into the laptop. The screen is too far away to reach comfortably, and the laptop is too large and heavy to constantly move about. Using it proved a chore rather than a pleasure.

Other negatives further soiled our impression. The keyboard is poor, the display unflattering, and audio quality is lackluster. Examining this laptop point by point, feature by feature, results in too few pros and many cons. Acer is offering too little laptop for too high a price. We simply have no reason to recommend the V5 Touch.