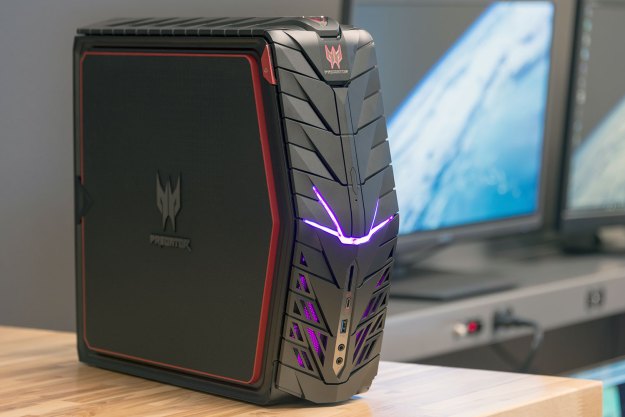 “The Predator G1 is a decent machine, but savvy gamers will want more.”

As graphics cards become more power efficient, and previously large components like drives take up less space than ever, the demand for compact gaming PCs is growing. It sounds nice, doesn’t it? An Xbox-sized PC, whirring away next to your 4K TV or monitor, without taking up the right half of your desk.

Many companies are trying to pack a high-end GPU and a nice CPU into an Xbox-sized chassis. Acer’s attempt is only 4 inches wide and 13 inches tall. It boasts a Core i7-6700, 32GB of RAM, and Nvidia’s GTX 1080, with Predator branding leaking from the seams. Acer isn’t the only one with a small chassis, however.

The Predator G1 has serious competition in the form of systems like the beautiful and powerful Falcon Northwest Tiki, and the newly redesigned Orign Chronos. These are powerful rigs from tried and true gaming manufacturers, and they’ve never failed to win us over. Will the Predator G1 find itself in good company, or does it have some catching up to do?

The smallest Predator desktop takes it design language from the larger computers in the line, with a futuristic tank tread appearance. It’s adorned with red highlights for the high contrast look gaming companies are into nowadays. Not that there’s anything wrong with that — the G1’s execution is clean, sturdy, and attractive.

It’s small, too. At just 14 inches tall and 5 inches wide, the G1 is about 2 inches larger in each direction than an Xbox One, and much smaller than mid-tower gaming PCs. It’s deeper than the Tiki and Origin, and one third of an inch wider. All three systems are quite heavy, but the Acer’s odd power adapter, which is just two mobile power supplies clicked into a frame, helps cut some weight.

All three systems are sturdy, attractive, and stable, so the real question comes down to one of preference. The Predator G1 wears its gaming intent on its sleeve, while the Origin Chronos is a more subdued take on the look, with a few red highlights here and there. The Falcon Northwest Tiki, meanwhile, is downright elegant – something the Acer can’t claim.

A custom I/O shield that disappoints

The G1 is obviously a gaming system, with colorful LEDs up front and a tank-tread, wrap-around look.

Around the back of the case, users will find four USB 3.0 ports, six-port audio, and Ethernet. In addition, the graphics card provides a set of video outputs, in this case, three DisplayPort, one HDMI, and one DVI-D. The front features 3.5mm audio in and out plugs, USB 3.0, USB Type-C, and an SDXC slot.

That’s an acceptable variety of ports, given the G1’s slight size, but it’s less satisfying in the context of competing systems. Both the Chronos and Tiki boast full access to a Z170 or X99 motherboard’s suite of ports, which includes more USB 3.0 ports, dedicated 2.0 ports for keyboard and mouse, internal display options, and in some cases PS/2 and optical audio ports. Type-C is a nice feature, but it’s starting to become a common sight.

Room inside, but not to grow

Inside, the Predator G1 is surprisingly spacious. The ITX motherboard is small enough to leave some room for ventilation, which is mostly handled by a blower fan near the top of the case in the back. The CPU cooler looks a little smaller than even a stock Intel cooler, though we can’t help but wonder why Acer didn’t opt for closed-loop CPU cooling in such a small rig, as both the Tiki and Chronos do.

Upgrading some of the parts is less appealing than others. The GPU is tucked away behind a shroud that’s screwed onto the frame. Removing it requires taking off the hard drive, unscrewing the panel, dealing with the riser, and detaching it from the shroud. Some upgrades also require removing the rear I/O panel, which means removing both side panels instead of just one.

Anyone who tinkers with the system will also have to be mindful of its power limitations. The power supply, which is just two 230-watt mobile power supplies in a cradle, doesn’t leave much headroom compared to the typical high-end build. Most competitors offer larger power supply options.

The Intel Core i7-6700 in the Predator G1 is an odd choice. We’re much more used to seeing the unlocked Core i7-6700K instead – the $50 price bump is typically well worth the unlocked multiplier. The catch here is that the Acer is using a motherboard running on Intel’s H110 specification, which shaves some dollars off the price tag for a reduced feature set. It doesn’t support overclocking as a result. So, does this more conventional Core i7 hold up?

The Chronos and Tiki shoot past the G1 in multi-core tests, thanks to their many-cored processors and unlocked multipliers. 7-Zip’s built-in benchmarking tool puts most of the systems on a more level playing field, although once again the Chronos claims almost double the other systems’ score.

It’s a far cry from the higher-end systems, taking almost twice as long as the Chronos to convert a 4K video in Handbrake. The CPU is fast, but leaves us wanting more, with no way to get it.

Our review unit, the only available configuration at publishing time, packs in both a 512GB SSD and a 2TB mechanical drive.

Unfortunately, the SSD in the Predator is only an eSATA drive, and it doesn’t quite reach the performance of PCIe-supporting M.2 drives that are perfect for these smaller-than-average systems. Both the Chronos and Tiki offer a choice between eSATA and PCIe drives.

Gaming in a lab

The graphical power in the Predator comes from Nvidia’s latest and greatest, the GeForce GTX 1080 with 8GB of graphical memory. We’ve reviewed systems with two of them in SLI, but this is our first with the single card.

This may be our first system with a single GTX 1080 inside, but even we can tell something isn’t quite right. Its score floats right around or under 16,000 in Fire Strike, which is almost identical to the GTX 980 Ti. Other reviews of the GTX 1080 put its performance over 20,000 at the low end, a big enough gap that the Acer Predator’s locked CPU likely isn’t the culprit, so what is?

There are a few possibilities. The first is the G1’s awkward power situation. One of the two 230W power supplies is for the GPU, while the other handles the rest of the system. How this happens isn’t exactly transparent, however, and the GTX 1080 demands 180W of dedicated power in a 500W suggest system power. Whether the single brick is enough to power the card is tough to say.

The CPU is fast, but leaves us wanting more.

The other possible issue is the H170 motherboard. Skylake chips support 16 PCIe 3.0 lanes, but some of those lanes could be used for other devices than the GPU, like USB 3.0 expansions or wireless networking. The H170 chipset supports an additional 16 PCIe 3.0 lanes. A GTX 1080 should be able to run without saturating the PCIe bandwidth, but it’s tough to tell with any certainty how those lanes are assigned. If the card has to share lanes with other devices, it may not be able to transfer that data fast enough.

Whatever the cause may be, the card isn’t running to its full capacity. We requested, and were sent, a second test unit to see if we could clear up the problem. Unfortunately, it remained.

Gaming on the road

The Predator G1 underperforms in synthetic tests, but the real question is how it holds up in some real-world gaming tests.

Despite our misgivings about the Predator’s 3DMark scores, it holds its own in gaming, even at 4K resolution. In Fallout 4, with the settings cranked up, the system sits at an average 63 frames per second, just over the ideal 60 FPS score.

The G1 hit the engine’s framerate cap at 1080p in both Battlefield 4 and Counter-Strike: Global Offensive, even with the settings cranked up. Clearly if that’s your resolution, this system is overkill, and only those with 1440p or 4K panels will be able to take full advantage – not uncommon for the price point.

Of course, a large reason for these wins is that the Tiki and Chronos as we reviewed them had the GTX 980 Ti, as the GTX 1080 wasn’t available yet. They include options for the 10 series cards now, and that will easily put them on par with the G1.

We’ve gotta hand it to the Predator. It manages to keep the volume down despite its small size. Systems with open grates, especially compact ones, can be quite noisy, but even under load the Predator G1 doesn’t break 41 decibels. That’s much quieter than the Chronos, which reaches 52.9 decibels with Furmark running.

The system also stays cool all over, largely thanks to the GTX 1080’s Founders Edition blower design, which blows the hot air out the back – the only part of the system that’s hot on the exterior.

Despite the premium price tag and gaming credentials, Acer packs the Predator G1 with all sorts of software you might not want. That includes CyberLink PowerDVD, Mozilla Firefox, and a slew of Acer’s first-party software.

This includes the Predator Sense tracking suite, Acer’s proprietary software for monitoring system vitals and temperature. Unfortunately, it’s not well equipped, with just a view for the CPU’s current clock speed, and an option to leave the fans on auto or change them over to a set speed. Fans of more capable alternatives, like MSI Afterburner, will find the Acer solution woefully inadequate.

Acer includes a two-year warranty with the Predator G1, which is a bit longer than we’re used to seeing on consumer systems.

Unfortunately, it can’t quite match the comprehensive service plans that Origin and Falcon NW offer. For one, Acer requires you to pay all shipping to them for the duration of the warranty, while Falcon offers free overnight shipping for the first year, and Origin for the first 45 days — although Origin charges a bit more to extend the privilege.

Acer also charges for phone support after the initial two-year warranty, where Origin and Falcon both offer 24/7 technical support for the product’s lifetime.

The Predator G1’s looks like a serious gaming powerhouse. But dig deeper, and it starts to feel like the G1 is built merely to be “good enough.” The Core i7-6700 is a strong chip, but it doesn’t hold a candle to the unlocked version found almost everywhere else. Whether due to power or thermal limitations, the GTX 1080 drags more than we expected. And for the moment, there’s only one configuration available, for $2,300.

That price puts the G1 well within range of the Tiki and Chronos. A similarly equipped Origin Chronos with an Intel Core i7-6700 will run you $2,510, with $111 bringing you up to the overclocked Core i7-6700K. The Tiki is admittedly more expensive at $2,972 for the i7-6700K version, but there are numerous advantages to both systems that the Predator can’t answer, including connectivity and upgradability. The Predator’s strong point, performance, is easily attributed to the newer graphical hardware, which its competitors didn’t have when we reviewed them.

When you’re spending more than $2,000 on a system, you should be demanding quality at every turn. Yes, the G1 is a capable machine at 4K, and overkill at 1080p. But why settle? Acer’s small form-factor gaming rig compromises on key components without cutting costs, and focuses on form over function.