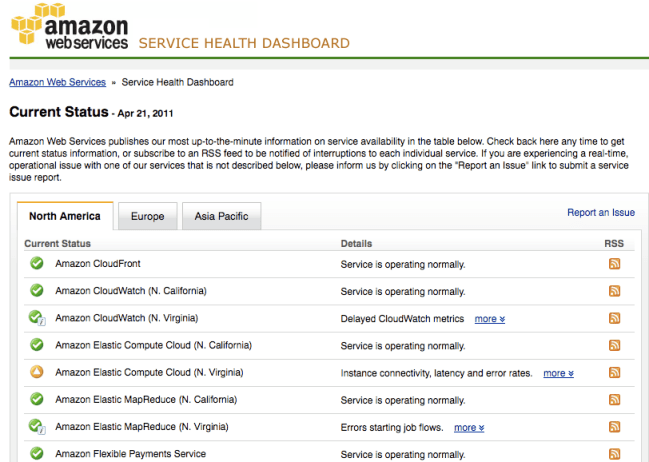 Earlier this morning, some of Amazon’s Elastic Cloud Compute (EC2) servers failed, causing several high-profile websites to go down. Sites affected by the outage include Reddit, Quora, Foursquare and HootSuite.

The failed servers compromise a portion of Amazon’s Web Services (AWS), a cloud computing package used by companies to run their websites. The EC2 outage occurred with servers based in Northern Virginia, where Amazon’s AWS infrastructure for the East Coast is based. The outage struck at 1:41 PT, according to CNET and appears to be an ongoing issue.

“Amazon is currently experiencing a degradation. They are working on it.” reads a note posted on Reddit, which, as of this writing, appears to be mostly operational.

Although a few sites now appear to be back up and running. Others, including Quora and Hootsuite, remain inaccessible.

A check of Amazon’s AWS “Service Health Dashboard” indicates ongoing problems with the servers. An update posted at 7:40 PT reads, “In addition to the EBS volume latencies, EBS-backed instances in the US-EAST-1 region are failing at a high rate. This is due to a high error rate for creating new volumes in this region.” Amazon is obviously still “working on it.”

Amazon has not yet indicated a time for when it expects to have services fully restored.

Topics
Apple’s iCloud is experiencing issues across more than a third of its services
Amazon designs an A.I. camera to teach computer vision to developers
What is cloud computing?
Amazon axes its unlimited Amazon Drive storage plan, puts it on a 1TB diet
The best Cyber Monday gaming laptop deals for 2022
The best Cyber Monday MacBook deals for 2022
Dell Cyber Monday deals: Save on Dell XPS 13, gaming laptops
Apple Cyber Monday Deals: Apple Watch, AirPods, iPad, MacBook
This Alienware gaming laptop with an RTX 3080 just got a bit cheaper
This Dell gaming laptop just got a big price cut — now $700
How to recall an email in Outlook
This Alienware gaming PC with an RTX 3080 Ti is $580 off right now
Almost a week after Black Friday, the Dell XPS 13 laptop is still $250 off