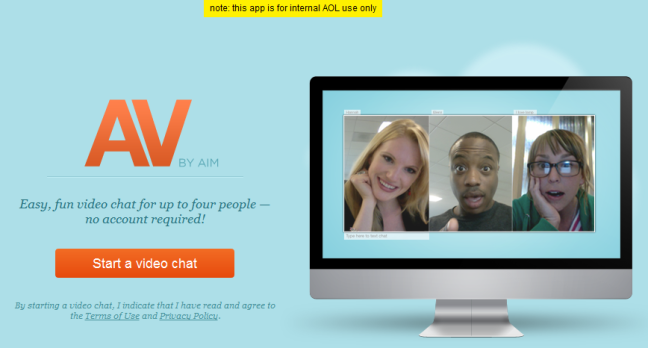 AOL’s been going through plenty of changes within the last year, and now it looks like the veteran Internet company is refining its web products. It’s new video chat service, called AV for AIM, leaked earlier today after an AOL insider sent TechCrunch the internal e-mail giving insiders only access to beta testing. TechCrunch published the link (the page still bears the ‘note: this app is for internal AOL use only’) and e-mail, and it’s swiftly become a public beta testing round despite AOL’s intentions.

Luckily for AOL, the feedback’s been positive (which makes our conspiratorial side want to label this an intentional leak). Video chat is becoming something of a necessity for large platforms, and now that Microsoft has bagged Skype, it’s an opportune time for challengers to refine or introduce such services. FaceTime has also been able to dominate this market, but Google and Facebook are rumored to be close behind. Google will likely offer a service compatible across multiple platforms versus its Gchat-only video functionality, and Facebook has been creating buzz over an integrated service, which is likely to be instantly popular based on how well its chat client has done.

So now AOL has thrown its hat into the ring with AV. The service is (currently) free, incredibly simple to setup, and allows you to add up to four people for a single chat session. If audio and video chatting isn’t enough for you, there’s also an option for text chatting, and your sent messages are transparently woven into the UI to keep picture quality clear. It looks clean and simple and by all accounts easy. Better yet, AV doesn’t require you to create an AIM or AOL account, which is becoming more and more of a bonus.

In the leaked e-mail, head of AIM products Jason Shellen notes that “this is the first of several substantial new AIM launches and the first to represent our shift in focus to better web software.” If AV is an indication of where AOL is taking its web services, we’re on board. The site has struggled to affirm its identity where it be feature and service provider or content aggregator, and this is definitely a good first step.