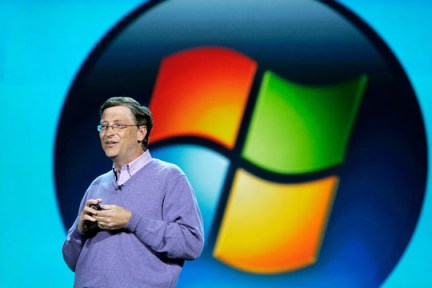 Apple CEO Steve Jobs’ company may constantly belittle Microsoft in its ads, but in all accuracy, there’s a lot of love between the companies. A large number of Macs run Windows installs via boot camp. And a large number of Windows users interact with Apple products such as the iPods and iPhone.

He affectionately remarked, “Well, [Jobs has] done a fantastic job. Apple is in a bit of a different business where they make hardware and software together. But when Steve was coming back to Apple, which was actually through an acquisition of NeXT that he ran, Apple was in very tough shape. In fact, most likely it wasn’t going to survive.”

He continues, “And he brought in a team, he brought in inspiration about great products and design that’s made Apple back into being an incredible force in doing good things. And it’s great to have competitors like that. We write software for Apple, Microsoft does. They compete with Apple. But he, of all the leaders in the industry that I’ve worked with, he showed more inspiration and he saved the company.”

While that remark might hurt Gates’ buddy and current Microsoft CEO Steve Ballmer a bit, it is a symbolic of the deep respect Jobs and Gates — two of the world’s most wealthy and influential men — have for each other (Gates has roughly 8 times the current net worth of Jobs).

The remarks weren’t the first kind words exchanged between the gentlemen. In 2007 at the D5 Conference, the pair met for an interview with The Wall Street Journal’s Walt Mossberg. Both made complementary remarks at the interview, with Jobs commenting that with Microsoft Bill Gates had founded the first true software company. Gates had likewise praised the populist approach that has driven Apple under Jobs’ leadership.

At the CNBC segment Gates pointed out that Microsoft still makes software for Apple computers. He said that Office 2010 should be a top seller for the Mac and tells Apple’s customers to look forward to the new version of the Outlook mail client, packaged with the Office 2010. The new version custom-made for Macs is based on Apple’s OS X development layer, Cocoa.