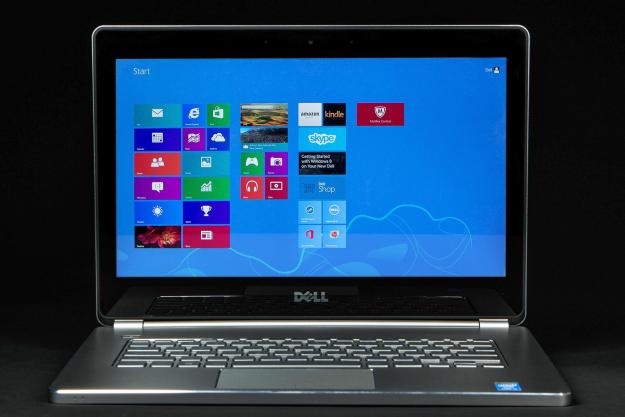 “Dell’s Inspiron 14 7000 Series is a slim, aluminum laptop with a nice 1080p touchscreen and solid battery life. We just wish it included an SSD.”

Dell’s had a rough time as of late. PC sales continue to slump, and the company has thus-far failed to capture a significant share of the growing mobile smartphone and tablet market.

But fortunes for the world’s number three PC maker may be turning. Dell is now completing the process of going private under the returning leadership of founder Michael Dell. The company showed its first year-on-year growth since 2011 last quarter, according to research firm IDC. Some of the company’s latest products, including the Venue 11 tablet line, look impressive from a design and price standpoint.

Dell’s 14-inch Inspiron 14 7000 Series isn’t as innovative as some of Dell’s other new devices, but it is an impressively slim (0.6 inches) laptop with a nice-looking (if derivative) aluminum shell, decent battery life, and a nice 1080p touchscreen. The $849 starting price is also pretty reasonable.

We do wish the Inspiron 14 7000 Series shipped with some solid-state storage to pair with its 500GB hard drive. The unrounded bottom edges make the system a bit uncomfortable to hold. But the Inspiron 14 7000 Series does deliver respectable performance for a mainstream laptop and decent battery life, all while remaining quite cool and quiet, which is a fine feat for a laptop this thin.

At a glance, it’s hard not to compare what Dell calls the Inspiron 14’s “forged aluminum” chassis to Apple’s MacBook Pro. It is worth noting that Dell’s Inspiron is thinner than Apple’s latest 0.71-inch thick models. But at 4.4 pounds, its weight is more in line with Apple’s larger 15-inch laptop, and slightly heavier than Lenovo’s similarly sized, 4.2-pound U430 Touch.

The new Inspiron 14 further sets itself apart from that other laptop maker, with a Dell logo etched into the lid and another situated below the rather nice 1080p touchscreen. Build quality overall feels quite good and solid, certainly better than the average plastic-clad portable.

Dell’s Inspiron 14 7000 Series is a slim laptop with a nice-looking shell, decent battery life and an 1080p touchscreen for $849, a reasonable price.

The only noticeable gaps in the system’s metal shell are around the hinge, and hidden on the bottom of the device. A couple of rubber strips on the laptop’s underside keep it from sliding around on a desk, while elevating it a bit for better cooling.

Our main fault with the Inspiron 14’s chassis, is also found on the bottom of the laptop. While Dell has shaved off the corners of the top of the laptop’s lid and the lower keyboard section, they neglected to do the same on the Inspiron 14’s bottom edges. The result is a laptop that’s a bit uncomfortable to hold from the bottom, as the edges dig a bit into your fingers and palms. This is less of an issue when carrying the laptop around when closed, as you can hold it along one of the more comfortable top edges.

The Inspiron 14 7000 covers the necessary basics when it comes to port selection. The right edge houses a USB 3.0 port, SD card slot, headphone jack, and small speaker grille. The left side is occupied by a second USB 3.0 port (with sleep-charge abilities), an HDMI port, power connector, lock slot, and another speaker grille. You’ll have to rely on Wi-Fi, though. Like recent MacBooks, there’s no Ethernet jack here.

As you may have guessed, given that the speakers fire out of small grilles on the sides of the laptop, the Inspiron 14’s audio output isn’t exactly stellar, but it’s not terrible either. The speakers don’t get as loud as we’d like for a system of this size, and there isn’t much in the way of discernable bass. But the sound isn’t overly distorted at max volume either.

Given that the Inspiron 14 is flirting with half-inch thickness, we weren’t expecting a great typing experience. We were pleasantly surprised. Sure, key travel is a bit shallow, but not egregiously so. The silver plastic keys are well spaced and generally well laid out.

With so much space around the keyboard, we can’t help but wish for full-size arrow and function-row keys. While the keys are backlit, there are only two selectable levels of brightness, and the backlight isn’t exactly even. There is some keyboard flex, but it’s not terrible. Overall, the Inspiron’s keyboard is quite comfortable to type on. Still, the keyboard on Lenovo’s similarly sized IdeaPad U430 Touch is a bit better overall.

At more than 4.5 inches diagonally, the touchpad is reasonably roomy, impressively responsive and accurate. It handles Windows 8 gestures well, and we didn’t notice a single unintentional cursor jump or twitch during testing. Even the click mechanism under the buttonless touchpad has just the right amount of resistance and travel, at least to our fingers.

An okay hinge and a great screen

The Inspiron 14 7000 Series’ hinge opens a full 180 degrees, allowing both the keyboard and screen to lie flat on a desk. But when the screen is at a more traditional laptop angle, tapping or swiping, particularly near the top of the screen, results in some noticeable screen springiness; the laptop’s lid bounces forward and back for a second from the impact of your fingers. This is a minor issue, and didn’t bother us much, but it may annoy others.

Dell also covers the Inspiron’s screen with a sheet of Gorilla glass, which is found only on high-priced options, like their XPS line.

Dell also covers the Inspiron’s display with a sheet of Gorilla glass, a feature often found only on high-priced options like the company’s XPS line. While there is some noticeable glare from the glass, it’s not as bad as we’ve seen from several mid-priced touchscreen laptops in the past.

The Inspiron’s panel also performed much better in our benchmark testing than the panel in Lenovo’s U430 Touch, reproducing 89 percent of the sRGB spectrum, versus 65 percent from Lenovo’s panel. The Dell display also delivers better black levels and contrast.

Viewing angles are also good, with no major contrast or color shifts, even when the screen is lying flat on a desk. The screen is noticeably dimmer at off angles. Brightness in general is the panel’s chief failing. At maximum brightness, it’s on par with the screen on Lenovo’s U430 Touch, but we’ve tested laptops in the past that get well more than 50 percent brighter, like Dell’s own XPS 12.

Still, overall, the screen here is loads better than what’s found in most budget and mid-range laptops, both in terms of pixel count and performance. And on every metric other than brightness, it’s much better than the screen on Lenovo’s U430 Touch.

Performance is a bit mixed

The components in the base model are certainly adequate for handling most mainstream computing tasks, but the lack of any solid-state cache is a bit disappointing, given the system’s price. Lenovo’s U430 Touch, for instance, pairs its hard drive with 16GB of solid-state storage for quicker boot times and faster loading of commonly used apps.

The Inspiron 14’s slim chassis may also work against its showing in some of our benchmarks, keeping the CPU from reaching its full potential. Both the Dell system and the model of the Lenovo U430 we tested have the same Core i5 processor. But the Inspiron 14’s score of 28 GOPs in the SiSoft Sandra’s Processor Arithmetic test ran well behind the Lenovo U430 Touch’s score of 38 GOPs.

Just like with the U430, Intel’s integrated HD 4400 graphics are the only GPU option here. The Dell system does manage a better showing in the 3DMark graphics benchmark, though, scoring 4,296 on the Cloud Gate test, and 649 on the more-demanding Fire Strike benchmark. The Lenovo system only managed 3,253 and 391 on the same tests, respectively. Most games will be playable on the system, but expect to keep detail settings set to low, especially if you hope to game at the screen’s native 1080p.

Perhaps the Inspiron’s most impressive performance feat is that the Inspiron 14 is able to remain relatively cool and quiet, even under load, despite its slim frame. Under full CPU load, the bottom rear of the laptop stayed just under 89 degrees, and only stepped up to 94.8 degrees when stressing the laptop’s graphics in FurMark.

The system vents out the back, and while the fan is audible as a low hum under load in a quiet room, it never got louder than 41.8dB in our testing, or just a couple decibels louder than our testing environment. The Lenovo U430 Touch hit 43.1dB, and we lauded that system for its relative silence. With the Dell system, fan noise is exceptionally low.

Battery life in line with the competition

Whenever a system gets close to a half-inch thick, battery life is often sacrificed, as there often just isn’t room inside the chassis for a normal-sized battery. Likewise, a display with more pixels, like the 1080p panel here, can also eat into battery life. But fear not: The Inspiron 14 delivers the kind of battery life we’re coming to expect from systems with Intel’s Haswell processors.

To be sure, you can find thicker systems with longer battery life, or laptops with optional extended batteries, but the Inspiron strikes a good balance between appealingly thin aesthetics and longevity when away from a power plug.

With its nice full-HD screen and slim, solid aluminum shell, Dell’s Inspiron 14 7000 Series looks much nicer than many laptops that cost more than its $849 starting price. It’s certainly a more premium-looking device than the similarly sized Lenovo U430 Touch.

But while the Lenovo system has an uglier screen, it also costs $150 less than the Inspiron with the same CPU and storage space. The Lenovo U430 has solid-state cache, which the Dell system lacks. That can make a big difference in the overall responsiveness of the system. We wouldn’t say the Inspiron feels sluggish, but it certainly doesn’t feel as snappy as its premium Ultrabook looks imply.

While its design is attractive, the Inspiron 14 is quite literally a bit rough around the (bottom) edges. Every time you pick up the system from the bottom, you’ll be reminded that the Inspiron 14 isn’t quite as sleekly designed as it looks as the chassis digs into your hands.

Still, with a nice-enough keyboard and a great touchpad, combined with pretty good battery life and a pleasing screen, the Inspiron 14 7000 Series is a solid almost-Ultrabook for those who don’t want to spend more on a pricier premium system like Apple’s MacBook Pro or Dell’s own upcoming XPS 15.

With a more comfortable backside and some solid-state storage, the Inspiron 14 7000 Series could be a great mid-range Ultrabook. As it stands, it’s just a pretty good thin laptop.