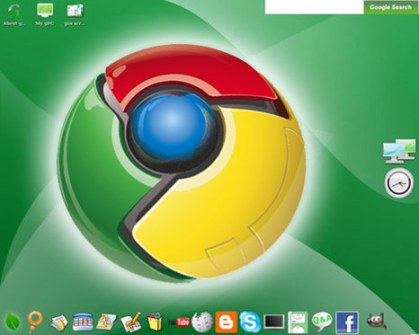 In late November of 2009, Google unveiled more details of its new Chrome operating system (OS). Google’s Chrome OS will be a whole new type of operating system—the company is calling it a lightweight operating system that will take place within a Chrome-based browser. The company says it envisioned Chrome as a Web-only experience, so you can kiss your file system and software applications goodbye. One of the fixes for this new operating system that has caused a bit of chattering is that it’s supposed to be extremely fast. Google is gearing the Chrome OS for speed: speedy Web access, speedy Web browsing, and just over all speed in performance.

Another important feature of Google’s Chrome OS is its storage. The Chrome OS model essentially uses local storage only for caching and to speed operations, allowing the operating system to store individual users’ data in cloud-based applications and services. This will provide quite a convenience for people—to be able to tap into their online lives from a variety of machines and locations. All-in-all this new OS is starting to sound mighty tempting—speed and convenience, what a perfect OS features.

Well, not everyone will be looking to Google’s new OS when it debuts this year—it just may not suit everyone’s personal taste. Also, Google has made some very bold promises regarding its new OS—speed and security, namely—and we would like to know just how those promises measure up to the real Chrome OS experience. Although this new operating system may be too young to be put to the test, many people are—here are the few reviews of Google’s new Chrome OS operating system.

IT Pro notes many great aspects of Chrome OS, but still find that this is a niche operating system and isn’t as revolutionary as Google makes it seem. The review concludes that although this OS will be great for netbooks, it is hard to see it as the business OS of the future (aka Google’s hope and dreams for it).

eWeek noted in it hands on review of the new operating system that it is very convenient that its interface looks so much like the Chrome Web browser because a lot of people are already familiar with it UI.

GadgetMix Tries a Speedy Boot Up

GadgetMix.com made an attempt at Google’s speedy Chrome OS boot ups on a netbook, but unfortunately they found the process wasn’t as speedy as promised.

Tech Radar Has a Quick Hands On

TechRadar.com also agreed this operating system is too much in its infancy to be fully judged. The quick hands on review concluded that it did seem more like just a browser than an actual operating system.

This review gives seven different reasons why Google Chrome is a unique operating system—like having a browser itself as an interface and Chromes swift boot up time.