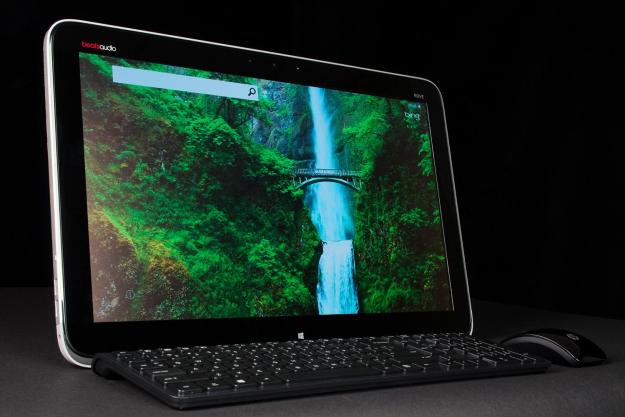 “Though relatively inexpensive and boasting a good display, the HP Envy Rove 20 remains a poor value. Consumers can buy a 20-inch all-in-one and a tablet for less than this PC’s base price.”

Does more mean better? In technology, the answer isn’t always clear, but consumer interest in large phones and large televisions has certainly spurred renewed faith in the idea of going big. Looking back from today, it’s hard to believe that a decade ago most people made do with 30-inch tube televisions, 16-inch monitors, and “flip phones” with displays the size of a quarter.

As an all in one, the system is underpowered and over priced, but as a tablet, it’s far too large and heavy.

All of that has changed, and rapidly, leading some computer manufacturers to wonder if it’s not time to cross big displays with portable PCs. Sony’s Vaio Tap 20 and Dell’s XPS 18 have led the charge in this new category, and they’re now joined by an entry from the world’s second-largest PC manufacturer: Hewlett-Packard.

Known as the Envy Rove 20, HP’s new all-in-one crosses cutting-edge PC hardware with tablet portability. A 4th-gen Core i3 4010U processor (the first Core i3 Haswell we’ve reviewed), along with a massive 1TB hard drive and 4GB of RAM reside inside the system. No, the specs aren’t mind-blowing, but consider this: our review unit sells for just $880. Dell’s XPS 18 is available at $900, but that model has a positively ancient 2nd-gen processor, and Sony’s Vaio Tap starts at $970.

The Rove’s on-paper value puts it in a great position from the start, but the system still faces a huge challenge. So far, no all-in-one/tablet crossover has impressed us; all have suffered from limited battery life and awkward tablet use. Can HP prove there’s a use for a plus-sized tablet, or is the Rove 20 nothing to envy?

Last October we slammed HP for bankrupting the Envy brand by using it to sell a printer. Since then, the situation has become much, much worse. The company is now slapping the name on almost everything, effectively destroying the brand.

The Envy Rove 20 is a perfect example, as it offers nothing to set it apart as a “premium” option. A glossy black bezel surrounds the display up front, and silver plastic holds in the Rove’s guts, a look that’s replicated on numerous low-end PCs from HP and other companies. There are no other flourishes, styling cues, or special features, and the Envy name doesn’t appear on the system itself.

Only one component on the Rove has been over-engineered: the kickstand. We instinctually attempted to grab the stand and pull it into position, only to find the stand wouldn’t budge. The only way to extend it is to hit a button on the back, which releases and automatically deploys the stand. Though meant to be impressive, this procedure could become tiring over time, as the stand requires several seconds to move into position.

Connectivity comes in three USB 3.0 points (two on the left flank, one on the right) and a combo headphone/microphone jacket. There’s no video-out or video-in, and Ethernet is only available through a bundled USB adapter. The Rove offers support for the spankin’-new 802.11ac Wi-Fi standard, however, which mostly forgives the lack of a native Ethernet port.

Awesome display, but could use more pixels

The Rove’s 20-inch panel offers a 1,600 x 900 resolution, and while that’s acceptable, it’s not the best choice for a display this large. Sharpness is adequate while using it as a PC, but tablet use can make unpleasant pixilation apparent in fine fonts and detailed images.

In all other respects, however, the panel performs beautifully, providing 94 percent of the sRGB gamut while also offering excellent brightness, respectable black levels, and good contrast. Though there are better displays on the market, we’re impressed to see this level of quality in an all-in-one sold for less than a $1,000.

Like many other HP computers, the Rove is part of the Beats Audio brand. Though some might think this is marketing hype, the system’s tiny speakers pumped out good volume with a hint of bass and minimal distortion in most situations. The only problem of note is poor sound staging, but this flaw is common in all-in-one systems; a single, centrally located speaker is never ideal for stereo sound.

A heck of a thing to haul

Once the kickstand is retracted, and the power cord unplugged, the Rove is ready to go. The big, chunky display’s rounded edges are easy to grip, and the bezel is large enough to grab firmly without activating the touchscreen. And a firm grip you’ll need, as the chassis is 1.3 inches thick and weighs a tad over 11.5 pounds.

The hybrid all in one category feels like the answer to a question no one asked, and HP does nothing to change that impression.

Yes, you read that right; over 11.5 pounds. That makes the Rove twice as heavy as the Dell XPS 18 and about ten times heavier than an iPad. Many people will literally be unable to hold the Rove at a usable angle with one hand, so lap or table use is preferable. Traveling with the system is a problem, too, since it’s a bit too large to fit in an average backpack. Surprisingly, HP doesn’t sell a case or screen protector as an accessory.

That may be just as well, because the battery isn’t up for more than a brief jaunt. Even the light-load Reader’s Test munched through a charge in three hours and eleven minutes, a time reduced to three hours and three minutes by the Peacekeeper Web browsing benchmark. The only consolation for these results is a short recharge time; the Rove goes from null to full in two hours or less.

Despite poor battery life, HP’s all-in-one isn’t too hard on the juice. We recorded it consuming 11 watts at idle with the display at maximum, and no more than 34 watts at load. Charging the system consumes 41 watts. Overall, these numbers are very close to the average laptop, which means they’re good for an all-in-one PC.

You can still use your PC the ‘old fashioned’ way

Although the Rove is an all-in-one/tablet hybrid, it does come with a traditional keyboard and mouse. Though they are basic plastic units with so-so build quality, they’re both wireless and adequate for many users. The keyboard offers reasonable travel, and the two-button mouse is light and glides nicely across a tabletop.

Our Rove review unit arrived with an Intel Core i3 4010U processor, the first 4th-gen Intel part of the Core i3 line we’ve had a chance to test. Like other mobile parts in the i3 product line, the 4010U has hyper-threading but lacks Turbo Boost. That means the chip does not exceed its base clock speed of 1.7 GHz.

This made a noticeable difference in our benchmarks. SiSoft Sandra’s Processor Arithmetic test reached a score of only 28.72 GOPS, while 7-Zip came to a result of a combined 5,280 MIPS. For comparison, a 4th-gen Core i5 processor will typically offer respective results of at least 35 GOPS and 7,000 MIPS. The Core i3 does not seem slow during moderate use, but any demanding task (like editing a home movie) will require more time than it would on a more powerful i5 or i7 mobile chip.

PCMark 7, a general performance benchmark, came to a combined score of 3,329. This score is a bit low, and hard drive performance is the main drag. The giant 1TB mechanical drive is not paired with solid-state storage, which results in long access time. Users will notice that programs, menus, and other items sometimes seem unresponsive for several seconds before they start to load. This occurs because the huge drive needs time to locate and start loading data.

3D performance comes via Intel HD 4400 graphics. Though Intel’s official specifications say the IGP is identical in both Core i3 and i5 mobile processors, 3DMark turned in Cloud Strike and Fire Gate scores of 3,298 and 475, respectively. These are both well below average for a 4th-gen processor, and more in line with the performance of 3rd-generation parts. Gamers should avoid the Rove as a result.

Though this system’s fan is always active, even at idle, we found that it generally operated at 40 to 41 decibels. This is audible in a quiet room, but easy enough to ignore. This figure generally did not waver under load, but it did hit a tolerable maximum of 42.5 decibels during our 3D graphics stress test.

System temperatures were just as stubborn. We recorded a maximum external reading of 87.2 degrees Fahrenheit at idle, and this figure only increased to 91.6 degrees at full load. Better still, these numbers only appear near the system’s vent. Other areas generally remained in the high 70s or low 80s.

We don’t comment on bloatware as often as we once did because its prevalence and annoyance has lessened greatly from the dark days of last decade. We still run across an occasional offender, however, and the Rove is guilty of bloatware. The system is loaded with Norton antivirus software that constantly bombards the user with aggressive advertisements warning of all the bad things that can happen without an anti-virus installed. As usual, the fact that Windows 8 has a built-in antivirus is not mentioned.

Fortunately, the offending software is not hard to un-install, and other bloatware is restricted to a few desktop shortcuts and pre-installed apps. Some of the apps, like Netflix, Box and YouCam, are even useful.

The HP Envy Rove 20 is the most competent all-in-one/tablet crossover thus far. The display is good, the peripherals are reasonable, connectivity is okay, and the price is not too high. Granted, $880 is a lot for a 20-inch all-in-one, but the system’s bang-for-the-buck is better than the absurdly expensive Dell XPS 18 or the moderately overpriced Sony Vaio Tap 20.

Those advantages aside, the Rove struggles with the core contradictions of an all-in-one/tablet crossover. As an all-in-one, the system is underpowered and over-priced, but as a tablet, it’s far too large and heavy. The hybrid all-in-one category feels like the answer to a question no one asked, and HP does nothing to change that impression.

Most consumers will find the sensible move is to skip the Rove 20 entirely and instead choose an all-in-one and a tablet. HP sells 20-inch all-in-ones for $500, leaving $379 to buy a Google Nexus 7, a Kindle Fire HD, or iPad Mini. This is a far better choice than trying to combine both systems into one big, bulky PC.

Best iPad Deals: Latest models on sale from $280
Best Alienware deals for September 2022
Best Apple deals and sales for September 2022
Best gaming laptop deals for September 2022
The HP Omen gaming laptop has a $400 discount today
This Lenovo laptop deal cuts the price down to $99
This dongle can bring a superfast Wi-Fi 6 connection to your old computer
Instagram appears to be down. Here’s what we know so far
Instagram is building a ‘nudity protection’ tool for your DMs
Get 3 months of NordVPN for free when you sign up today
The best mini-LED laptops you can buy in 2022
AMD cuts GPU prices at just the right time to pull ahead of Nvidia
The best wireless keyboards for 2022