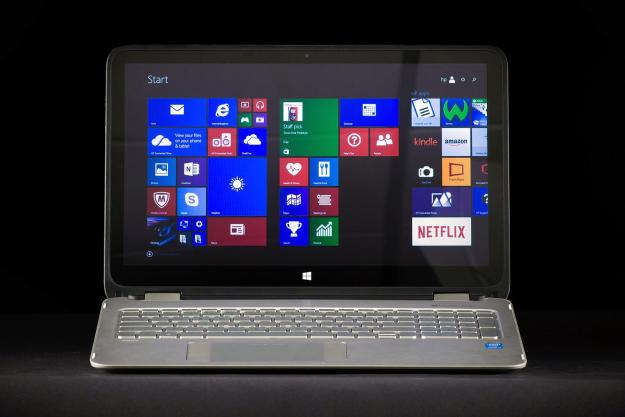 “Though inexpensive and quick, the x360 fails to offer the portability and battery life users expect from a convertible notebook.”

Oh, how the mighty have fallen. A few years ago, the HP Envy brand was used to describe only the best that the laptop world had to offer. By 2012, it represented a truly excellent Windows alternative to the MacBook Pro. Yet, it fell just as quickly as it ascended. Today, we have the Envy x360.

Starting at $679, this Envy is clearly a budget model, rather than an ultra-premium device. The base model, saddled with an old-fashioned 1366×768 display, is unappealing. Our upgraded review unit arrived with a 1080p display for $769.

The remaining specs introduce no surprises; there’s a Core i5-4210U dual-core CPU, a 500GB hard drive with solid state cache, and 8GB of RAM. The base model has 6GB.

HP has given the x360 one neat trick, and that’s its hinge. Obviously inspired by Lenovo’s Yoga line, this notebook’s display can rotate back until it touches the bottom of the chassis, effectively transforming the system into a Windows tablet. This is a 15-inch device, however, making it larger and heavier than anything Lenovo offers. The tablet experience is lackluster as a result.

At first glance, the x360 isn’t impressive, but is at least unoffensive. The plastics used to construct the chassis make a half-hearted attempt at giving the x360 a metallic look. While the effect isn’t entirely convincing, it does bestow a sense of elegance to the design. It’s also aided by gently rounded corners, and a few bits of subtle chrome trim.

Touching the system dissolves any goodwill its aesthetics might inspire. Inexpensive notebooks rarely feel sturdy, but the x360 feels downright fragile at times. Panels creak and flex even during everyday use, like when opening the display lid. These aren’t errant moans either; some can be consistently reproduced by opening, closing, or just carrying the system. At one point, a portion of the palm-rest even popped out of its mount, and had to be settled back into position by hand.

Putting the display into tablet mode makes the x360 feel more robust, but also reveals another problem. This convertible is way too large for comfortable handheld use. It measures in at 9/10 of an inch thick, and weighs just over five pounds. Nevermind one-handed use; the x360 is unwieldy even when you grab it with both hands.

Here you’ll find three USB ports, two of which are 3.0, along with HDMI, Ethernet, a combo audio jack, and a card reader. 802.11 b/g/n Wi-Fi is standard, but 802.11ac is available as a $20 upgrade. Bluetooth is included on all modes. All told, this is a solid array of ports, but it’s not enough to offset the x360’s poor build quality. An optical drive is not an option.

The troubles continue with the keyboard

The HP Envy x360 provides a full sized keyboard with a numpad. Unlikely many 15.6-inch rivals, this notebook does not reduce the size of the numpad keys to make room for the rest. This results in scrunched up keys across the entire keyboard, most notably Backspace. We found ourselves constantly hitting Num Lock when we were trying to press Backspace.

Despite the thick chassis, key feel isn’t great. There’s a good amount of travel, but the bottoming action is vague. Touch typists will introduce errors into documents because some buttons won’t register, even if it feels like you’re activating a key. Back-lighting is included, but there’s only one brightness option.

At least the touch-pad is a positive. Like some earlier HPs, the x360 uses a special “Control Zone” surface which dedicates a half-inch on each side of the touch area exclusively to Windows 8 multitasking gestures. A difference in texture separates these areas from the rest of the touchpad, which makes gestures easy to activate. We did have an occasional problem with errant palms activating the left side of the touchpad unintentionally. Aside from that, HP’s Control Zone touch-pad is a model that other laptop makers should follow.

Our review unit’s 1080p touchscreen represents an upgrade in resolution over the base version of the x360. In most other respects, it’s still a low-end screen. We measured a maximum contrast ratio of 80:1, very high black levels, and a gamut spanning 73 percent of sRGB. Brightness was acceptable, hitting a maximum of 229 lux, which is just barely enough to overcome the panel’s glossy coat.

The x360’s display also has a problem we haven’t seen before; gray vertical stripes that move left and right.

These figures beg a comparison to the Lenovo Flex 2 15, which also has a 1080p screen. Though it has a narrower gamut than the HP’s screen, it makes up for that with a far superior contrast ratio of 470:1, deeper blacks, and more accurate color. The Flex’s superiority becomes obvious the moment a movie or game is played on it.

In subjective viewing, the x360 has all the worst traits of a low-end laptop display. Bright black levels sap scenes of their depth, colors appear muted, and shadowy details that are visible on better screens fail to show up.

A hazy look dominates the display no matter what brightness is set to, and people often look like they have an unnaturally warm tone, as if they spent too much time in tanning beds.

The x360’s display also has a problem we haven’t seen before; gray vertical stripes that move left and right. They’re plainly obvious when viewing a white screen like a Word document, but are also noticeable when bright, colorful images are on the screen. This only makes matters worse.

At least the Beats Audio speakers are decent. Though never loud, they provide clear, crisp audio, and are powerful enough to fill a small room with sound. External speakers would be an upgrade, but some users will find the x360’s speakers to be adequate.

Our review unit arrived with an Intel Core i5-4200U 1.6GHz dual-core CPU, which is the same processor found in the base version of the x360. This is more powerful than what’s typically found in convertible notebooks, and it easily proved its worth in the SiSoft Sandra processor arithmetic benchmark.

As you can see above, the x360 almost ties the Flex 2 15, and easily beats both Toshiba’s Click 2 Pro and Acer’s TravelMate TMX313. These figures show that the x360 is among the more powerful convertibles out there, which makes sense given its size and Core i5 CPU.

7-Zip’s compression benchmark backed up SiSoft’s scores, reaching a result of 6,964. That’s higher than the Toshiba Click 2 Pro’s score of 6,743, and far better than the Acer TravelMate TMX313’s mark of 4,167. The Lenovo Flex 2 15 wears the crown, however, with its score of 7,188. We also tested the x360 with Geekbench, which produced a multi-core score of 4,563. In HD Tune, which tests hard drive performance, the x360 transferred data at an average of 88 megabytes per second. These figures are average for a 15-inch notebook. While this HP can handle CPU-based tasks, it struggles when it comes to 3D performance. That’s due to its relatively slow Intel HD 4400 graphics chip. We measured a Cloud Gate score of 3,713, and a Fire Strike score of 502. These numbers are respectable for this category, but don’t add up to a great gaming experience.

Even among modestly equipped competitors, the x360 only beats the TMX313, which has a substantially less powerful version of Intel HD graphics than the other four models mentioned above. Poor graphics performance is only compounded by the pixel-dense 1080p screen.

Though it’s technically a convertible, the x360 is no easier to carry than many standard 15-inch notebooks. Its weight of 5.2 pounds feels hefty, particularly in tablet mode. The Lenovo Flex 2 15 weighs a tenth of a pound less in spite of the fact it doesn’t support tablet use at all. However, this HP’s heft is average for its size, and it can be carried in a laptop bag with ease.

The x360’s battery life falls short of the competition.

The battery is also average, offering five hours and two minutes of life in the Peacekeeper Web browsing benchmark. While that’s better than Acer’s Travelmate, which lasts about 15 minutes less, it’s behind the Lenovo Yoga 2 13, the Lenovo Flex 15, and even cheaper notebooks like the Acer Aspire E5.

Our wattmeter says the x360 consumes up to 12.1 watts at idle, a figure that rose as high as 27.1 watts at full system load. Those are good numbers for a system of this size, beating the Lenovo Flex 2, and coming in just north of the Acer Aspire E5 14. This tells us that the problem is the battery’s size, not overall power draw.

The x360’s fan spins constantly, producing a steady 36.1 decibels of noise. That’s moderate for the category, and it increases to 44.8dB at full system load. That’s slightly more than the Lenovo Flex 2 15, less than the Acer Aspire E5 14-inch, and about the same as the Yoga 2 13 and Toshiba Click 2 Pro.

External temperatures hover around 86 degrees Fahrenheit at idle. Full load increased heat by just eight degrees in a relatively small hotspot on the system’s left side. The x360 is the coolest 15-inch notebook we’ve tested this year.

The HP Envy x360 is not the company’s best effort. Though it wears the premium Envy name, there’s nothing premium about its design, which looks and feels a bit cheap. Many recently reviewed mid-range notebooks, like the Flex 2 and the Acer Aspire E5, either look better, feel more durable, or both.

Of course, this HP has a wild card; it’s a convertible. There are few systems that offer tablet use and a powerful processor priced close to our review unit’s $769 MSRP. Most, like the Yoga 2 13-inch, are much smaller.

Yet, any advantage the x360 might have gained from this unique trait is negated by its bulk. A 15-inch, 5.2 pound system is just too heavy for enjoyable tablet use. The hinge does provide the added benefit of easy access to the touchscreen, and the keyboard can double as a stand, but the less expensive Lenovo Flex 2 does the same.

The tablet mode’s failure to provide value in this plus-sized convertible kills the x360’s potential appeal. When combined with its disappointing feature set and build quality, it adds up to an underwhelming package. This notebook does offer good processor performance and a solid touchpad, but that’s not enough to excuse the system’s flaws.

I tried out the incredible Samsung Odyssey Ark, and it has one big problem