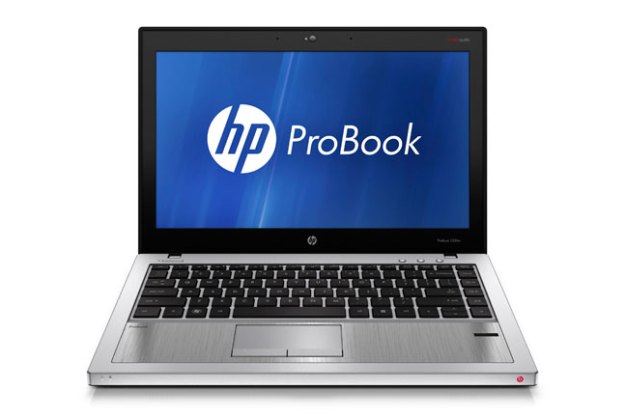 “While slightly more expensive than some other laptops, and handicapped by poor battery life, the HP ProBook 5330m offers a solid combination of hardware and supports it with robust security software.”

Ultraportable business laptops are as much a part of a business traveler’s life as comfortable suits and airline tickets. Like their consumer counterparts, these small laptops are compact enough to fit in most bags and light enough to carry without strain, but they differ in their construction. While consumer laptops usually employ plastic, laptops aimed at frequent fliers are made of more durable materials and typically forgo glossy surfaces in favor of matte finishes.

Enter the HP ProBook 5330m. Priced as low as $799 when sporting a second-gen Core i3 processor, this laptop goes toe-to-toe with capable competitors such as the Lenovo X220 and Toshiba Protege. Our review came with an upgraded Core i5-2520M processor, bringing the price to $899.

Given the competition, this laptop will need to make a strong showing to earn a recommendation. Is it up to the task?

Simple elegance is this laptop’s theme. Most of it, including both the lid and the interior, is clad in brushed aluminum. While this material is hardly new, it remains an easy way to add a touch of class to a laptop, and the effect hasn’t weakened here. The cold metal also makes this laptop pleasing to touch, a notable advantage over most of Lenovo’s offerings, which employ a durable aluminum-magnesium material with an unusual texture.

The interior features a dual-tone color scheme. Brushed aluminum coats the palmrest and the space behind the keyboard, but is framed with flat silver metal. Durable? We’re sure it is. Beautiful? Not quite.

Most potential buyers won’t mind that, however. In fact, drab design is often a plus for a business laptop, which is why Lenovo has never failed to offers its ThinkPad laptops in matte black. Strength is more important, and there’s plenty to be found. Picking up the laptop from any single corner doesn’t result in any chassis flex, and the lid seems to resist weight well, which should help prevent display damage while the laptop is crammed in a carry-on bag.

Flip this laptop over, and a handy quick-release panel reveals itself. Inside you’ll find the battery, which can be replaced by the user. Connectivity includes HDMI, VGA, a combo headphone-and-mic jack, two USB ports, and a combo USB/eSATA port. USB 3.0 is notably absent, but the port selection is otherwise solid.

Business laptops are often known for their top-notch keyboards, but the keys on this ProBook don’t seem like anything special from a distance. The layout is the typical full-sized, numpad-less style used on most laptops with 13.3-inch displays, right down to the row of page up, page down and end keys that flank the right side. Though comfortable, it isn’t perfect. More space could be devoted to the backspace and enter keys, for example.

Key feel is also lacking. There’s little flex, but individual keys seem squishy when pressed and return to position softly. Anyone hoping to find crisp, precise inputs will be disappointed. Using the keyboard in the dark isn’t a problem, however, thanks to a backlit keyboard that lacks brightness controls but is otherwise well implemented.

The touchpad is far smaller than it could be, given the size of the laptop’s chassis, and there’s no texture to the touchpad surface. Two separate touchpad buttons are provided, but like the keyboard, they’re softly sprung and lack precision. At least multi-touch gestures are supported and work well, which makes document scrolling a pleasure.

Like most business laptops, the display on this HP is matte, which means it resists most glare. To test this, we used the laptop with the display positioned across from a glass sliding door as the sun poured in. While the sunlight did cause the relative brightness of the display to lower, we did not have to tolerate our own visage as we wandered through the halls of YouTube. For business travelers, this means that productivity won’t come to a halt if the jerk on the other side of the plane decides he’d like to open his blind and stare at the sun for a few hours.

Matte coatings usually result in reduced image quality, and this display is no exception. It’s simply not as vibrant as a quality gloss display. This shouldn’t be taken as a knock on this laptop in particular, however, because all matte displays have this issue. Test images revealed that the HP is actually better than average, as its black levels are reasonable and its gradient performance is butter-smooth, though there was a hint of a speckled pattern in the darkest portion due to dithering. Your only choice of pixels comes in the form of 1366 x 768 resolution, which is standard for this class.

One unexpected label on this ProBook is the Beats Audio logo found to the upper right of the display and on the front of the chassis. It’s not just for show. Audio quality from this laptop is not only better than most business laptops, but also better than most 13.3-inch consumer laptops as well. There is some bass available, and the volume can be turned up to 11 without excessive distortion. Users keeping this laptop stationed at a desk will still want to option external speakers, but the quality is adequate for impromptu dance parties at the airport Hilton.

The ProBook 5330m feels a bit chunky. The metal construction is heavy, and this is reflected the by the spec sheets, which list the weight at just a sliver under four pounds. Even so, this laptop is light enough to be comfortable in most backpacks and messenger bags. It’s only the dense construction that makes it feel heavier than it is.

Measure the laptop, and this ProBook reveals itself to be slim in spite of its heavy feel. The entire laptop is under an inch thick, and since the battery is inside the chassis, there’s no bulge to catch on backpack straps and zippers as you slide the laptop in or out of a bag.

That slim, tucked-away battery turns out to be this laptop’s greatest weakness. The size results in limited capacity of just 41Wh, which is far less than the 50Wh to 60Wh capacity found in competing laptops. As a result, battery life is poor. Under the worst-case-scenario Battery Eater test this laptop was drained in only fifty-seven minutes, while the much lighter Reader’s Test sucked it dry in four hours and thirty-six minutes. These results are poor for a laptop in this class.

Any travelers trying to catch shut-eye in the vicinity of this laptop need not fear, as it is reasonably quiet no matter what it’s doing. Under light loads and at idle the fan is easily covered up by any ambient noise. Stress testing forced the fan to spin up, but even at maximum speed the noise is far from disturbing.

The penalty for such serene operation is often heat, and that rule isn’t broken here, particularly during lap use. Even when using the laptop exclusively for web browsing it became warm enough to induce sweaty palms after twenty minutes, particularly the left side palmrest, which seems to be the hot-spot.

Desktop use was comfortable in similar conditions, but stress tests again revealed a tendency to become toasty. After fifteen minutes of full-load processor stressing the bottom of the laptop was so warm that we hesitated to touch it. If the price and specifications didn’t already inform you that this isn’t a mobile workstation, the heat build-up during intense workouts will.

Like many computers, this HP comes with pre-installed software, but it’s hardly worth the title of “bloatware.” Though this laptop’s build quality and matte display are the easiest ways to determine that it is meant for business, its most significant enhancements don’t have anything to do with the hardware.

That’s because this laptop ships with security features like fingerprint recognition, face recognition and even Bluetooth phone authentication. On top of that is a robust password manager that stores user passwords in encrypted files, keeping them safe from prying eyes. Privacy protection such as this can be of great value to businesses, as they are often concerned about trade secrets be revealed via stolen laptops, but consumers will also appreciate the extra security.

Some of the less exciting apps include HP Connection Manager and HP Power Assistant, which replace similar Windows functions, but both stay out of the way if you don’t want to use them.

Though small, this laptop packs hardware that’s on par with the typical 15-inch consumer laptop. At its heart is a Core i5-2520M processor running at 2.5 GHz, which is supported by 4GB of RAM and a 500GB hard drive that spins at 7200 RPM.

As a result, the ProBook 5330m returned excellent performance figures in most tests. SiSoft Sandra’s Processor Arithmetic benchmark reported a combined score of 42.5 GOPS, the best score we’ve received from a laptop in the past few months, while 7-Zip returned a combined score of 8158 MIPS. More general testing with the PCMark 7 resulted in a score of 1,739.

All of this praise starts to fade when gaming performance is tested, however, as Intel HD Graphics 3000 is the only solution available. 3DMark 06 returned a score of 3,662, which is average at best, and game testing showed that most modern 3D games aren’t pleasing at the laptop’s native resolution. DirectX 11 is not supported, so some modern game features are unavailable, though there’s not enough power here to handle them even if they were supported.

Even so, the gaming performance is on par with other 13.3-inch laptops, and HP makes no claims about this laptop’s chops as a multimedia powerhouse. Games aside, this laptop will be able to handle most workloads with ease.

Taken on its own, the HP ProBook 5330m seems like a reasonable laptop. Business travelers will be pleased by the sturdy construction, matte display and excellent performance

At least, that is, until other mile-high executives pass by in the airport with their own choices. Suddenly the flaws in this product start to reveal themselves. The Lenovo X220 offers better battery life and a more portable size at a nearly identical price. Toshiba will sell you a Core-i5 powered Protege for just $799. Even Dell is able to undercut HP slightly with the Vostro V131.

Don’t take this to mean that this laptop is not competitive, however. While slightly more expensive than some other laptops, and handicapped by poor battery life, this ProBook offers a solid combination of hardware and supports it with robust security software. Some buyers may find that the built-in security features make this laptop the best choice.

The best MacBook Pro bags
The best touchscreen laptops for 2022
The best 13-inch laptops for 2022
Best iPad Deals: Latest models on sale from $280
AMD Ryzen 9 7950X vs. Intel Core i9-12900K: Two flagships face off
AMD Ryzen 7000 vs. Ryzen 5000: specs, performance, and more compared
AMD Ryzen 7000: Everything we know about Zen 4 CPUs
Apple’s October event may have been canceled before it began
Developer says it can turn your AMD 6800 XT into an Nvidia 3090 Ti
Best MacBook deals and sales for September 2022
Best gaming chair deals for October 2022
This new Windows 11 feature will help you protect your passwords
HP flash sale: Pavilion x360 2-in-1 laptop just got a $130 price cut