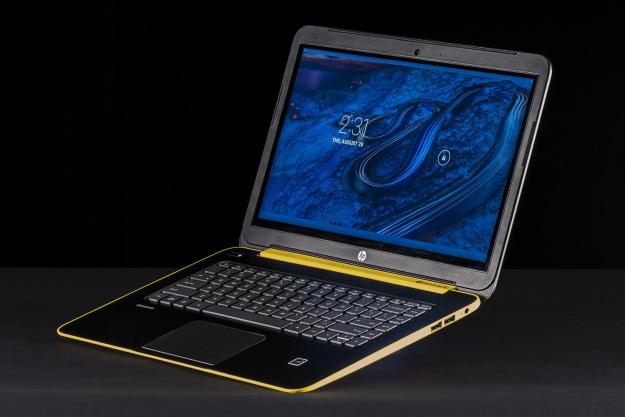 “The Slatebook is one of the better budget notebooks around, but Android still isn't a strong replacement for Windows, or even Chrome OS.”

PC manufacturers are desperate to ditch Windows. Who can blame them? Microsoft is now the only company in the PC market that charges for an operating system. After all, building an affordable computer is difficult when Redmond demands a check for every unit that ships.

One way to get around this is to ditch Windows, and that’s exactly what HP has done with its new $429 Slatebook. Though it looks like any other 14-inch notebook, it actually has the innards of a high-end tablet. Inside, there’s an Nvidia Tegra 4 processor with 2GB of RAM, and a 16GB solid state drive. Where there’s Tegra, there’s bound to be Android, in this case version 4.3 (also known as “Jelly Bean”).

Despite its hardware, the Slatebook is not a convertible, dock-able, or other exotic device. This is a notebook designed to compete directly with Windows systems in the budget market. That means it has to fight off an alternative that packs a full version of Windows 8.1, an Intel Core i5 processor, and a 500GB hard drive.

Let’s see if Android is a valid alternative – or if it’s better off sticking to mobile gear.

The Slatebook combines a black display lid and interior with a yellow lower chassis. Yes, yellow, and only yellow is available.

The HP Slatebook is well built for its price.

Whether or not you like the shade HP has chosen will be a matter of personal preference but, whatever your thoughts, there’s no denying that it’s a bold move. HP’s marketing approach suggests that it hopes to sell Slatebooks to young buyers. The colorful accents help the system stand out from the sea of stodgy silver, gray, and black alternatives that youngsters usually end up with.

Looks aside, the HP Slatebook is well built for its price. The lack of an optical drive, or even a 2.5-inch hard drive bay, means that HP can reinforce the chassis without worrying whether room is left to fit in bulky components. Aluminum is used to construct the interior and display lid too, which helps strengthen both, and provides a more premium feel than what is typical among budget notebooks.

Here you’ll find three USB ports, one of which is 3.0, along with HDMI, a combo audio jack, and a MicroSD card slot. We’re pleased to see the inclusion of three USB ports; many Android tablets and notebooks include only one, maybe two. Wi-Fi connectivity comes in the form of 802.11 b/g/n, and Bluetooth 4.0 is standard.

Keys that cut it

Keyboard quality is a huge issue for Android systems that attempt to replace Windows, but the Slatebook fares better than most. This is partially because the keyboard’s physical quality is robust. Key travel is excellent for a thin notebook, and strokes bottom out with a firm, tactile response.

Android behaves itself when used with the keyboard. In the past, we’ve noticed problems with keyboard lag in Android convertibles, notebooks, and all-in-ones. However, the problem never appeared here.

Typing was buttery smooth on the Slatebook. It elicited instant responses, just as a Windows PC would. The only trait missing is back-lighting, but that’s entirely excusable. Notebooks in this price range almost never provide back-lit keys.

The touchpad, which measures four inches wide and two and a half inches deep, is quite good. Even the lightest touch is greeted by an instant response, and most multi-touch gestures work as well with the touchpad as they do on the touchscreen.

We did, however, notice that some features (like the drop-down notification bar) did not activate with a swipe, but instead required a click. This can be confusing, because the interface doesn’t respond the same way when using the touchscreen.

The Slatebook’s 1080p touchscreen is one of its best features. Only one other system, Samsung’s Chromebook 2, offers the same resolution at a lower price. Most notebooks with a 1080p screen are priced at $600 or above, regardless of size. Pairing this resolution with a 14-inch display creates a sharp, fine image that produces detailed graphics with ease.

The Slatebook’s 1080p touchscreen is one of its best features.

There are some problems, however. Black levels are not deep, which means there’s a general lack of contrast and depth. Movies and games don’t have the cinematic look that’s provided by the best Android and iOS tablets.

We also noticed image and video scaling issues that seem to be caused by Android itself. In the YouTube app, for example, there’s no specific setting to select 720p or 1080p. As a result, videos often buffer down to the lower resolution.

That can work on a small screen, but on the 14-inch Slatebook, it results in a generally poor viewing experience. Games can have similar scaling issues, particularly if they’re several years old, and weren’t designed for the latest 1080p and higher screens.

While display quality is a mixed bag, the Beats Audio speakers are solid. They’re not loud, and don’t have the bass grunt that Beats is known for. However, they can fill a small room with clear sound. Most users will find them to be adequate for everyday use.

This notebook is a prime example of how irrelevant performance has become to everyday computing. Aside from a single Nvidia logo on the Slatebook’s Web page, there’s almost no mention of what’s inside. Even the press release material we received from HP didn’t bother to mention the Tegra 4’s clock speed and core count (which are 1.9 GHz and four, plus a “battery saver” core, respectively).

The user experience is where the HP Slatebook shines, though. The Slatebook simply does things without bothering the user with specifics. HD videos, 3D games, and Web browsers run without a hitch. Yes, the raw compute power of an Intel system technically blows this system away, but the difference is rarely noticeable.

One limitation that may trouble owners, however, is the 16GB hard drive. Chromebooks offer similarly small internal drives, but the Slatebook runs Android instead of Chrome OS. As such, it doesn’t direct users to the cloud as readily. Users looking to download HD movies, 3D games, or their entire MP3 library will quickly run out of space. At least the MicroSD card slot can be used to add more storage.

Svelte and light, the Slatebook weighs in at just 3.7 pounds, and is only 16mm thick. That makes it comparable to many Ultrabooks, which is impressive given the price tag. Most Windows systems in the same bracket are almost an inch thick, and Chromebooks also run larger when endowed with a 13-inch or 14-inch screen.

The experience is where the HP Slatebook shines.

Despite its size, which provides room only for a tiny 3-cell, 32 watt-hour battery, the Slatebook lasted six hours and fifty-two minutes in the Peacekeeper Web browsing benchmark. That’s an excellent result. The best low-cost Windows notebook we’ve recently reviewed, the Acer Aspire E5 14, lasts only six hours and four minutes. Most alternatives last around five hours.

Unsurprisingly, we measured very modest power draw from this notebook. At idle, it needed only 5.7 watts, and that figure climbed to just 9 watts at load. This system consumes less power at load than most Intel Core laptops do at idle.

Another benefit of the Tegra 4’s efficiency is its reliance on passive cooling, which means there’s no fan to annoy you with noise or hot air pouring out from a vent. We noted a maximum external temperature of 89.9 degrees Fahrenheit at load, and that figure dipped as low as 86 degrees at idle. The Slatebook will never burn your lap, and is always comfortable to use.

Living with an Android notebook

In many respects, the Slatebook is an incredibly capable device. The keyboard is great, and the touchpad is at least as good as any Windows competitor. The screen is solid, and the Tegra 4 processor provides plenty of power. There’s only one problem; Android.

Google never built this operating system for a notebook. That’s what Chrome OS is for. As such, there are problems that crop up when trying to use Android as a Windows replacement.

Scaling is the big issue. Apps and even Web pages see Android, and assume that you’re using a smartphone or a tablet. That means you get an interface optimized for touch and a five to ten inch screen, rather than one built for a touchpad and a 14-inch screen. Buttons appear comically large, videos buffer at a resolution optimized to conserve data, and some games don’t play well with the keyboard and touch-pad.

There’s also a lack of operating system-centric features to support notebook use. The settings menu is obviously optimized for phones and tablets. Therefore, it covers settings like Wi-Fi, Bluetooth, and data usage before it handles storage, power settings, and app management. Many features common in Windows simply aren’t available; no parental controls, no precise power controls, and no device manager. You can’t even force the display to stay on at idle for more than 30 minutes without downloading an app.

The limitations of Android drag the Slatebook down. That’s a real shame, because it’s otherwise an excellent budget notebook. We have no complaints about its performance, battery life or interface. While the display could be better, it’s already solid given its $429 MSRP.

We’re a bit puzzled as to why this notebook does not run Chrome OS. Perhaps it’s not powerful enough. Maybe the touchscreen seemed to be a better fit for Android.

Whatever the case, we hope the obstacles can be overcome, and a version of this notebook running Chrome OS hits store shelves at some point. It would be a very good buy.

As it stands, the Slatebook can still make sense for buyers on a very tight budget who want a competent, quick, and simple notebook for basic tasks. Just be sure you know what you’re getting into when you purchase an Android notebook; the operating system’s limitations may catch you off guard.