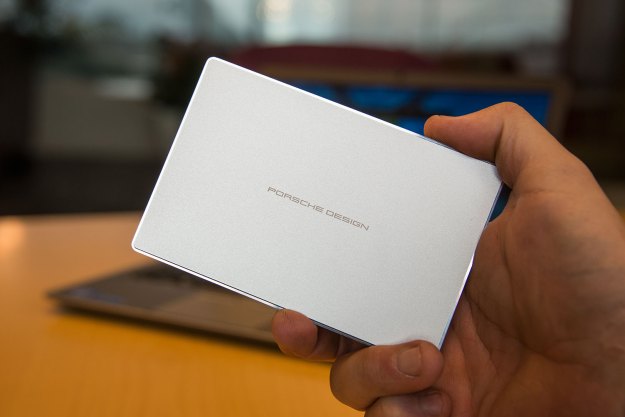 “The LaCie Porsche Design Drive is fast and sleek, but carries a high price”

If you’re not backing up your data, you should be. And if you put it off because you’re afraid of a massive hard drive taking up space, LaCie might have the answer.

At 6.8 ounces and only .4 inches thick, LaCie’s aluminum encased Porsche Design Mobile Drive is lightweight and sturdy. Why, you might be wondering, is the word “Porsche” being used to describe a hard drive? Because the exterior was designed by Porsche Design, a subsidiary of carmakers Porsche AG that designs hard drives alongside shoes, suitcases, watches, and other accessories. External hard drive makers LaCie has worked with Porsche Design since 2003; this USB-C mobile drive is just the latest combined effort.

The drive is offered with one terabyte of storage for $110, 2TB for $150, and 4TB for $230. We reviewed the 2TB model. If the silver aluminum finish isn’t your favorite, there’s also a 2TB version with a faux-gold finish, available exclusively at Apple stores, for $150.

None of these drives are competitively priced, but can the Porsche make up for that with elegance and speed? Let’s take a look.

An aluminum box with sharp edges

This lightweight and slim hard drive is entirely encased in solid aluminum. It feels sturdy when you pick it up, and the design shows some attention to detail. The top and the side are brushed, resulting in a texture familiar to MacBook users, while the ridges reflect light almost like a mirror. The result is beautiful to look at, though the edges feel sharper than we’d like.

The drive is only 0.4 inches thick, which is nice, with a surface area of 5 x 3.3 inches. The case and the drive inside combine for only 6.8 ounces, which means you can throw this into your bag and likely not notice that you’re carrying anything.

Our review unit was the 2TB model. According to the LaCie website, the 4TB model is twice as thick and considerably heavier, at 0.8 inches thick and 11.1 ounces, presumably because there are two 2TB drives inside.

In the box you’ll find two cords — a USB C cable, and a USB 3.0 adapter. This means you can plug the Porsche drive into just about any computer. Older devices that don’t offer USB C are supported, and so are hypothetical future computers that don’t offer traditional USB ports. It’s a useful bit of futureproofing.

About as fast as a mechanical drive can be

LaCie advertises this drive as offering speeds “up to 5Gb/s”, with the asterix denoting this is the “maximum theoretical bus speed.” That sounds like an insane claim, and it is, but less than you might think. 5Gb/s, because of the lower case “b,” stands for gigabits per second, not the more familiar gigabytes per second, which would be abbreviated as 5GB/s. Five gigabits per second works out to around 625 megabytes per second, which sounds a lot less awesome, but is still pretty fast. The fastest external SSD we’ve tested recorded average speeds slower than that.

So what did our tests show? Our Crystal Diskmark test showed a read and write speed of 132 megabytes per second, which was true for USB 3.0 and USB C connections alike.

USB-C offers crazy-fast transfers, but it can’t alter the laws of physics.

To be fair, that’s exactly the sort of speed consumers should expect from a mechanical hard drive. USB 3.0 and C both offer crazy-fast transfers in theory, but they can’t alter the laws of physics. Mechanical drives can only transfer data so quickly.

SSDs, of course, can reach much faster speeds. The Samsung Portable SSD T3 offered a read speed of 422MB/s and a write speed of 392.6MB/s. However, it costs significantly more. The Porsche Design drive’s speed is reasonable for its category.

Considering the speed limits of mechanical drives, you might be wondering: does USB 3.0 or USB C even make a difference? As it turns out, yes. Connecting this drive to a USB 2.0 port, we saw a read speed of 78.4MB/s and a write speed of 74.8MB/s, significantly slower than the 3.0 and C speeds of 132MB/s.

Plug in this drive for the first time and you’ll find a setup program for Windows and Mac. The program helps you partition your drive, allowing you to decide how much space you want to use only with Windows computers via NTFS, and how much space you want to work with Windows, Linux, and Mac devices via FAT32. Considering the file size limitations of FAT32, it’s disappointing that exFAT isn’t offered.

The setup program also offers to install a couple of applications. There’s Genie Timeline Free, which is an application that automates backing up files of folders, and Lacie desktop manager, which shows you the status of your drive. You can also access your drive’s documentation and (for some reason) install Adobe Reader.

We recently reviewed the lightweight and speedy Samsung T3 Portable SSD, which costs a staggering $800 for 2TB. Solid state drives are tiny and fast, but if you want a lot of storage space they sure don’t come cheap.

With that in mind, you can think of the Porsche Design drive as a mechanical alternative to the T3. Both are surprisingly small and light for how much storage they offer, and both come in attractive aluminum cases. But the Porsche drive, being mechanical, is significantly cheaper, and slower

Having said that, the Porsche drive is only affordable compared to SSDs. Western Digital and Seagate both offer 2TB USB 3.0 drives for under $100, with comparable speeds. If all you care about is cost per gigabyte and transfer speeds, we can’t make a compelling case for this $150 2TB drive.

There are positives here. The case is solid aluminum, meaning it’s lightweight and sturdy. The design is clean, with no unsightly logos. And USB Type-C is supported, still a rarity among external hard drives. But even with these things in mind, this is more of a fashion statement than a practical piece of hardware.

Intel responds to report about hackers gaining access to a debugging interface
Western Digital wades into the PCI Express hard drive arena, and Sandisk debuts a huge SD card
LaCie introduces updated Rugged and d2 Thunderbolt 3 storage devices
LaCie's lightning-fast hard drive will cost as much as a new MacBook Pro
SSDs could be as cheap as HDDs in time for Black Friday
These new Eero PoE devices are for serious Wi-Fi setups only
Google’s new privacy tool lets you know if your personal info was leaked
Nullmixer is a nasty, new Windows malware dropper
How to leave a team on Microsoft Teams
Nvidia addresses the rumors about the RTX 40 GPUs’ power consumption
Intel says Moore’s Law is alive and well. Nvidia says it’s dead. Which is right?
Best Microsoft Surface Pro deals for October 2022
Logitech’s new Mac accessories are customizable, functional, and undeniably pretty