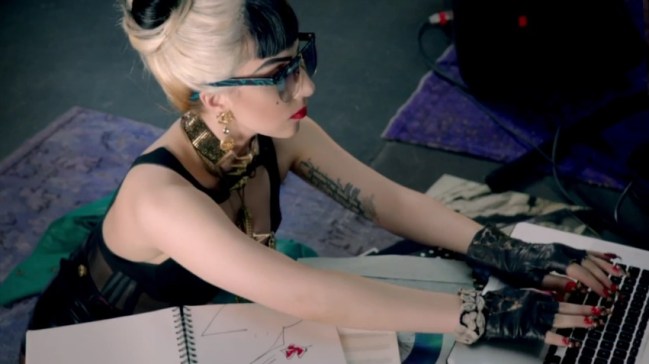 Selling out is all the rage these days. In what feels like the latest in an endless stream of endorsements, Lady Gaga is now pushing Google Chrome in a new 1.5 minute ad for the Web browser. The new video, pretty much a music video, splices shots of Gaga dancing across a bridge looking like Madonna with YouTube videos of her fans and some fake footage of her using Google Chrome. The song featured is her new single “Edge of Glory,” out just in time for her album, which hits digital and physical store shelves today.

So why does Lady Gaga prefer Google Chrome over its competitors? You won’t find out here, but if Lady Gaga’s followers will make YouTube videos like this at her command (which they did, according to Google), they will surely convert to her browser of choice, no? Google is hoping so.

This news comes after Lady Gaga signed up with Zynga to make “GagaVille,” a new FarmVille-type social game using her likeness and trademarked odd sense of style. That game features a lot of unicorns, crystals, and disco ball sheep, among other things. She’s also a designer for Polaroid, a Best Buy Mobile partner, a sponsor of Monster energy drink, has her own Beats-branded headphones, and has a perfume line, among other things, likely setting records for the number of celebrity endorsements used to promote a new album. Still, while MC Hammer sure got bit for his endorsements, the world of 2011 seems much kinder to product tie-ins.

Does Lady Gaga make Chrome seem cooler? Will this influence anyone to use Google’s browser?

Topics
Update Google Chrome now to protect yourself from these severe vulnerabilities
Google is making it easier to save Tab Groups in Chrome
Wearables at Google I/O 2021: Everything new announced today
7 things you didn’t know you could do in Google Chrome
Apple will pay $50M to settle the butterfly keyboard fiasco
This 15-inch Windows laptop is a great buy while it’s just $139
Get Samsung’s 49-inch Odyssey G9 Monitor for under $1,000 today
Why Starlink download speeds are experiencing double-digit dips
Hackers just stole LastPass data, but your passwords are safe
Best Chromebook deals: Get a new laptop from $99
Best laptop deals: Save on Apple, Dell, HP and Lenovo
Best MacBook deals: Save on MacBook Air and MacBook Pro
Best Dell XPS deals: Save on XPS 13, XPS 15 and XPS 17