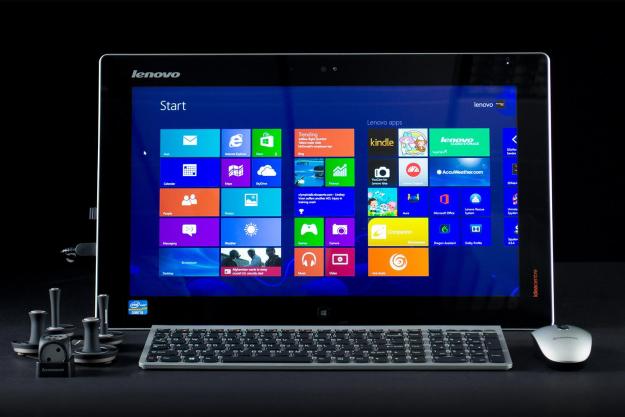 “Lenovo’s Flex 20 is not the best implementation of a portable all-in-one design we’ve yet seen, but it is the only one we’ve tested with a price tag that makes sense.”

One of the strangest new breeds of PC to come from the release of Windows 8 (and its touch-friendly interface) is the portable all-in-one. Either a plus-sized tablet or a very small AIO, depending on your perspective, these rigs try to provide consumers with household portability without sacrificing screen size.

On paper, that doesn’t sound like a bad idea, but it leads to two obvious downsides; size and weight. Maneuvering a 20-inch slab that weighs as much as a gaming laptop isn’t easy, which makes these supposedly portable all-in-ones harder to move than you’d think. But this hasn’t stopped manufacturers from continuing to tackle this form factor, and Lenovo’s Flex 20 is one of the newest examples to hit the market.

At $799, the Flex undercuts HP’s and Dell’s models by about $200. But is that enough to make this the first portable AIO worth buying?

There’s reason to think Lenovo could succeed where others have failed. The company has led the touchscreen charge from the start with a wide variety of capable convertible tablets, and Lenovo is the only company trying to compensate for some of Windows’ deficiencies with a unique touchscreen interface known as Aura.

Lenovo’s most important advantage, however, is its recognition that value matters. The company usually offers impressive hardware at any given price, and the Flex 20 is no exception. Equipped with an Intel Core i3-4010U, four gigabytes of RAM and a 500 GB hard drive, this system retails at $799, while most competitors sell for at least $999. Is this the first portable all-in-one that makes sense?

Designing a system as a slate leaves little room for aesthetic flourish, and the Lenovo Flex 20 is no exception. From the front, the PC is little more than a 19.5” monitor with a rather large bezel along all sides. Silver trim, which is the result of the chassis wrapping around the corners of the edge-to-edge glass display, adds a (very) subtle hint of class.

Turning the Flex around reveals that simplicity remains the dominant trait. The silver shell which makes up the computer’s body is broken up only by a chrome Lenovo logo and a slim stand that can be pulled out after moving a latch. There’s nothing elaborate about how the stand operates, as it’s merely a slab of material that swings outwards, but it is constructed from metal and feels sturdier than the (usually plastic) stands most competitors use.

Power and volume buttons are placed along a single corner, making them easy to access when using the tablet in either landscape or portrait mode. There’s also a tactile Windows button on the bottom bezel which can be used to access the Start Screen. As with many other portable all-in-ones, display brightness controls are absent on both the system and the bundled keyboard, so you’ll have to rely on auto-dimming or bring up Windows’ power options whenever you’d like to make a change.

Connectivity is a serious sore point, as the Flex 20 offers just two USB ports, both 3.0, and a combo headphone/microphone jack. There’s no video-out or video-in and no card reader. This already limited selection is made worse by the fact the bundled mouse connects via USB adapter, which means this PC, when used as a desktop, has a single USB port. That’s a bit too basic for our tastes.

The Flex’s 19.5” display offers a resolution of 1600×900. Whether this is adequate depends on how the system is used. When set on a desk is treated as a small all-in-one the screen looks reasonably sharp, but close encounters of the tablet kind will make the screen’s poor pixel density obvious.

Resolution aside, however, the screen is a stunner.

Resolution aside, however, the screen is a stunner, rendering 95% of the sRGB gamut and achieving a contrast ratio of 610:1 (at maximum brightness) in our tests. These numbers essentially tie the results we extracted from the HP Envy Rove 20 and Dell XPS 18, systems which sell for about $200 more. The only downside is the display’s mediocre maximum luminosity of 230 lux, but this still proved more than adequate for use in a sunlit room.

Audio quality is mixed. While the speakers provide reasonable volume and have a clear mid-range, there’s little bass to back them up, which means music and movies feel sound flat. We think most buyers will want use a pair of external speakers.

Though the Flex 20 boasts a 4th-gen Intel processor, the Core i3-4010U is one of the slowest parts in Intel’s line-up, providing a clock speed of just 1.7 GHz. And, unlike its big brothers, this Core i3 does not offer Turbo Boost.

Predictably, this proved a disadvantage in our benchmarks. SiSoft Sandra’s Processor Arithmetic test turned in a combined score of just 28.67 GOPS while 7-Zip’s compression bench came to a result of only 5,300 MIPS. Both numbers are well below a standard all-in-one, and even the Lenovo Flex 14 laptop managed a score of 7,087 in 7-Zip.

PCMark 8’s storage benchmark turned in a particularly disappointing score of 1,892, the lowest score we’ve received since we started using the test several months ago. While the Flex 20 feels responsive overall, the 500GB mechanical drive’s slow access times are evident when opening mundane apps like Internet Explorer. Rather than appearing almost instantly, as with a system that has a solid state drive, there’s a brief pause before the browser begins to load.

At this point you’re probably expecting poor 3D performance, too – and you’re right. The Flex 20 relies on Intel HD 4400 graphics, which turned in a 3DMark Cloud Gate score of 3,378 and a Fire Strike score of 510. Most laptops score better and powerful all-in-ones such as the Inspiron One 23 and Vizio CA24T can beat the Flex 20 by a margin of at least 40%.

Lenovo is careful to position the Flex 20 as a device meant for around-the-house portability, rather than frequent fliers, and for good reason. Even if you found a bag large enough to fit it, using it as a tablet in a constrained space like an airline seat or taxi cab would prove a chore. This is no replacement for a notebook.

Lenovo’s Flex 20 is an affordable and pleasant portable all-in-one that receives decent, if not outstanding, marks in several areas.

With long distances out of the picture, the Flex 20 doesn’t bother with a large battery that would add even more to its already formidable eight-pound weight. This severely hampered endurance; we received just two hours and fifty-six minutes of life while running the Peacekeeper browser benchmark, while our light-load Reader’s Test extended life to almost four and a half hours. These results are on par with other portable all-in-ones, but also far short of most modern notebooks and dedicated tablets.

Not just the battery can be blamed for its short life, however. Power draw is also a factor. We recorded the system drawing up to 20 watts at idle (with display at maximum brightness) and 34 watts at load, figures that about 10 watts above an average 4th-gen ultrabook. While the Flex 20 isn’t going to balloon your carbon footprint, it certainly draws more power than a notebook or convertible tablet.

Yes! A decent keyboard and mouse!

If there’s one thing Lenovo knows, it’s how to make a decent keyboard, and that applies even to those bundled with affordable all-in-ones. The Flex 20’s keys are typical of the company; spacious, tactile and easy to use when your eyes are focused elsewhere. Our only real complaint is the lack of a display brightness control, an omission made all the more annoying by the inclusion of an eject shortcut (the Flex 20 doesn’t have an optical drive, of course).

Similar praise can be heaped on the bundled mouse. Though basic, it’s reasonably comfortable to use and offers the expected left/right buttons alongside a nicely weighted scroll well. The sensor uses invisible laser technology, a nice upgrade from the tacky infrared sensors most bundled mice employ.

An Aura of competence

Lenovo ships the Flex 20 with its own custom touchscreen interface, known as Aura, which is designed for use on a touchscreen device that’s laid on a flat surface (like a tabletop). The goal is to turn the PC into a multi-user device on which photos, videos and games can be shared.

There’s reason to think Lenovo could succeed where others have failed.

Aura achieves this through a unique radial menu interface which is manipulated by both taps and gestures. A photo, once opened, can be moved about the screen and re-sized with the flick of your fingertips. Lenovo also offers unique game peripherals, such as joysticks that can be stuck on the screen and then used as tactile input.

All of this works smoothly, but Aura ultimately is a distraction rather than an important feature. Most users will open it up, play with it for ten minutes, and then move on. As well-executed as Aura may be, getting users to care about an optional interface with limited functionality is a battle Lenovo can’t possibly win.

The cooling fan inside the Flex 20 certainly isn’t a go-getter, as it lazily spins at an audible, but very low rate no matter what load the system is faced with. Even our most demanding stress test couldn’t encourage the fan to register on our decibel meter.

We can’t blame it, though, because there doesn’t seem to be much for it to do. The Core i3 low-voltage processor creates very little heat, warming the system’s rear to only 82.4 degrees Fahrenheit after multiple benchmarks. At idle, the device barely feels warm to the touch.

These results exceed both the HP Envy Rove 20 and Dell XPS 18, both of which warmed up above 90 degrees and generate over 42 decibels at load.

Lenovo’s Flex 20 is not the best implementation of a portable all-in-one design we’ve yet seen, but it is the only one we’ve tested with a price tag that makes sense. Dell’s XPS 18 and HP’s Envy Rove, both of which start at almost $1,000, are too expensive for what they offer. Lenovo’s $799 Flex, on the other hand, is only a tad pricier than a typical budget all-in-one. And while its performance is lackluster compared to traditional desktops, it’s not that far behind other devices in its class.

The question, then, is whether you buy the argument that a large, tablet-like device is a reasonable alternative to owning a desktop and tablet together. We still think that’s dubious because the Flex 20, try as it might to slim down, remains a bulky device that’s truly unwieldy in tight spaces and lacks the battery life needed for long journeys.

Lenovo carefully markets the Flex as an around-the-house device, but that raises the question; why buy a portable device that’s a chore to carry? Doesn’t it make more sense to buy an iPad and, if the screen appears too small, simply hold it closer to your face? We still don’t see the logic of this form-factor, which makes it impossible for us to recommend the Flex 20.

Best MacBook deals: Save on MacBook Air and MacBook Pro
Best laptop deals: Save on Apple, Dell, HP and Lenovo
Best Chromebook deals: Get a new laptop from $99
This stunning DIY gaming PC dream machine is made of glass
The best gifts for PC gamers
Google is now supporting my awful browser habits, and I love it
Google just revealed what you found most fascinating in 2022
Even 15-inch portable monitors come in OLED now
How to reset graphics drivers in Windows 11
The most common multi-monitor problems and how to fix them
Upcoming MacBook Pro could have a 20-inch folding display
This Alienware gaming laptop with an RTX 3080 is $650 off today
This Lenovo laptop is just $129 today, and it’s selling like hotcakes