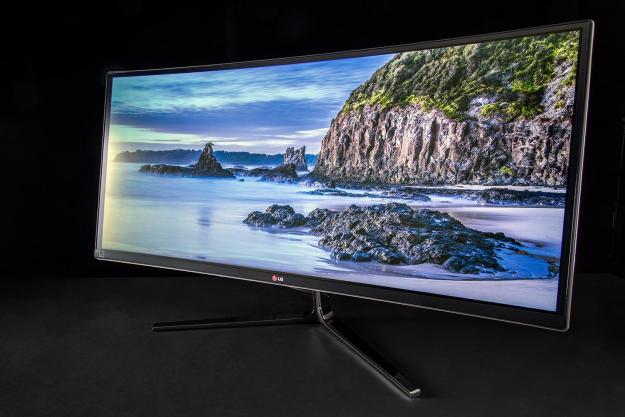 “The LG 34UC97 is big, bold and easy on the eyes, but its extreme price and stubborn refusal to add important basics hold it back.”

Rectangles are out. Curves are in. This trend is obvious everywhere you look. Smartphones are seeking ways to use rounded edges or curved screens. New LED televisions are using a subtle arc to enhance the viewing experience. And now even monitors are in on the fad.

LG can hardly be accused of jumping on the bandwagon, however, because it practically built the bandwagon. The company has already explored the use of curves in televisions and phones. It’s also an early pioneer of monitors with the 21:9 aspect ratio, an unusual innovation that’s perfect for viewing widescreen movies.

The new 34UC97 is the flagship of the company’s curved, ultra-wide monitor fleet. It offers an IPS panel with 3,440 x 1,440 resolution, a wealth of input options and sleek design, all of which comes at a flagship price of $1,299. That makes this LG one of the most expensive monitors to lack 4K. Is the price justifiable, or will early adopters be burned?

Pulling this monitor out of the box for the first time is an immensely satisfying experience. The 21:9 aspect ratio means the 34 diagonal inches translate to about 32 inches of horizontal screen space. That’s almost seven inches wider than a typical 28-inch 4K monitor. You might expect the vertical axis to shrink as a result, but in fact it’s nearly identical.

No one is going to accuse this LG of being subtle, but it probably shouldn’t be.

The panel’s size is impressive, and LG makes sure it looks good it with a smooth, elegant silver metal back, chrome trim and a chrome stand. No one is going to accuse the 34UC97 of being subtle, but it probably shouldn’t be. This is a monitor purchased for style as much as for function.

That unfortunately means the 34UC97 lacks the ergonomics you might expect from a monitor that sells for more than a grand. Tilt is the only adjustment supported. The monitor is technically VESA compatible, but only through a special bracket that’s provided by LG on request. It was not included with our test unit.

LG puts the monitor’s massive size to work by serving up tons of input options. There’s two HDMI, one DisplayPort, two Thunderbolt, two USB 3.0 ports and an audio port to power the reasonably loud built-in speakers (HDMI and DisplayPort can drive them, as well). This is a strong selection of ports for any display.

The joy of joysticks

Turning the 34UC97 on can be a trial if you’re not sure what to look for. There’s a switch around back and a joystick control hidden in the middle of the bottom edge. Turning the monitor on means hitting the switch first, then tapping the stick, which is also used for navigating the on-screen controls.

LG’s control arrangement is logically arranged and easy to understand, but the joystick takes getting used to. It can be pushed in any direction, but its input is translated to a simple left, right, up, and down signals. And, because of its location, up and down aren’t selected by actually pushing up or down, but instead by pushing back or pulling forward.

There are quite a few options to choose from. Image quality can be adjusted for brightness, contrast, sharpness, gamma, and color temperature. Primary color adjustments are joined by six-color options that include cyan and magenta, among others. Such precise calibration options make it clear LG is targeting the professional market with this monitor, even if the stand isn’t up to par.

The picture-in-picture and picture-by-picture modes are also worth mention. Remember this displays numerous inputs? Users can combine them with PbP mode to effectively turn the 34UC97 into two smaller monitors without a bezel between them. That’s an unusual but attractive option for users who for some reason must work with two separate computers simultaneously.

Our favorable initial impressions of the ultra-wide LG weren’t dampened by what we saw once it was turned on. The monitor’s IPS panel provides strong viewing angles, vibrant colors and reasonably good contrast.

For a closer look we loaded several 4K, 21:9 trailers. They fit the display perfectly, of course, and seemed nearly as sharp as they did on a 4K monitor. Close inspection reveals the sharpness is not as high, but the difference is only readily apparent when viewing fine details like small text or tree branches against a bright blue sky.

Objective testing discovered the monitor renders 100 percent of the sRGB gamut and 78 percent of AdobeRGB. It also maintains a contrast ratio of 600:1 at its maximum brightness of 225 lux. Gamma hit the target of 2.2 and the average color difference was only 1.83. A difference of one is considered unnoticeable, so the LG is pretty close to perfect in that regard, though it does fall behind the Dell P2715Q and the Samsung U970HD.

So far, so good. But we noticed one obvious and severe problem: backlight bleed in all four corners of the display. The effect is only visible when viewing a dark image, but in that scenario it’s exceedingly obvious. We’re disappointed to see this issue appear in an otherwise outstanding monitor because it ruins the look of high-resolution movies that are supposed to shine on a 21:9 screen.

The 34UC97 looks good out of the box, but we wanted to see how far we could push it. To do that we hooked up our calibration utility and started to change settings in an effort to reduce the color difference while maintaining strong contrast.

Our attempts were successful thanks to the various color and gamma adjustments LG provides. Initial attempts to improve color accuracy threw off gamma and contrast, but eventually we dialed it in to an average color difference of 1.26. That slightly beats the Dell P2715Q for the second-best color accuracy we’ve seen from a stand-alone monitor this year. Our tweaks also expanded the AdobeRGB gamut to 79 percent.

We could see the difference between the pre-calibration and post-calibration quality with ease. After our tweaks the image looked warmer (and more natural) than before, with bolder reds and tamer blues. The contrast ratio was lowered to 540:1, but only because we also lowered brightness to 125 lux, and in doing so slightly reduced the backlight bleed problem and increased shadow detail.

In the right situation, with the proper content, the calibrated LG 34UC97 looks absolutely tremendous. Its pixel density is high enough to provide excellent sharpness to a user sitting about three feet away and its color accuracy is spot-on. The 4K trailer of Elysium, for example, showed depth and vibrancy similar to a mid-range LED HDTV.

21:9 is a wonder for those dedicated to multi-tasking, but it’s not useful for everyone.

“The right content” is a heck of a caveat, however. Many movies, TV shows and video clips will not properly fit the 21:9 screen, which means you’ll end up with black bars on each side. Games also often lack support for 3,440 x 1,440, which means they’ll run at 2,560 x 1,440 and, once again, you’re looking at black bars. Photos, websites and Word documents also enjoy no benefit from the aspect ratio unless you plan to work with multiple windows at once.

In the hands of an expert multi-tasker, there is value to be found in the wide screen. We found that up to five Word documents could be comfortably arranged across it. A photo editor could arrange three images 1,000 pixels wide and still have some room to play with. A huge number of browser windows can be viewed at once. Yet most people don’t have the skill or attention span to work effectively with so much visible at once, and as a result much of the theoretically useful screen space goes to waste.

LG provides a one year parts and labor warranty for the 34UC97. That’s pretty standard among inexpensive monitors, but it’s short by the standards of expensive professional displays. The Dell P2715Q, for example, comes with a three-year warranty, and Dell promises to ship a new replacement display immediately if it can’t fix a problem over the phone.

And yet, there are problems. Backlight bleed is obvious in all four corners of the screen. The 21:9 aspect ratio doesn’t always agree with movies and games. And there’s none of the ergonomic features professional users expect from a monitor.