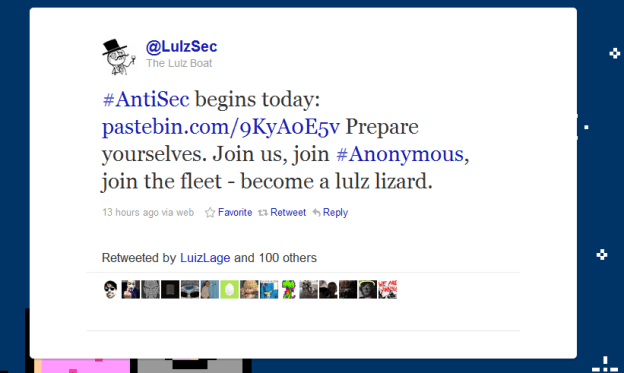 Despite some speculation about an alleged rift between hacktivist groups LulzSec and Anonymous (which was swiftly denied), the two underground organizations have teamed up to take on the lack of government transparency. According to a LulzSec press release, the two will declare “immediate and unremitting war on the freedom-snatching moderators of 2011.”

Dubbing their effort Operation Anti-Security (#AntiSec for Twitter purposes), LulzSec and Anonymous will unite forces to expose faulty handling of user data or poor security measures. While the two groups both have similar operations, their targets and public profiles differ. Anonymous has a business-oriented approach and tends to hack oppressive governments or reportedly corrupt businesses; LulzSec, on the other hand, openly mocks its victims and doesn’t shy away from showmanship. It also makes no qualms about punishing vulnerable sites simply for their lack of security measure. Regardless of who exactly is behind these sects, security firm and government websites (which have frequently been at their mercy) should take notice. “Top priority is to steal and leak any classified government information, including email spools and documentation. Prime targets are banks and other high-ranking establishments,” the statement reads.

These groups aren’t all talk. Gaming companies’ web properties aren’t the only ones affected by the hackers, and the likes of the CIA and security firm HB Gary have also been successfully infiltrated. The site for UK-based Serious Organised Crime Agency was taken down earlier this morning, which LulzSec claimed responsibility for. It has since been restored.

A new era of Internet warfare has been ushered in by these hacktivist groups, and they’ve proven that hardly anyone is safe. How long these operations will last is unknown, and both groups largely claim they genuinely want to bring attention to Web privacy issues as well as the insecure sites consumers put their faith and personal data in. “Do you feel safe with your Facebook accounts, your Google Mail accounts, your Skype accounts? What makes you think a hacker isn’t silently sitting inside all of these right now, sniping out individual people, or perhaps selling them off? You are a peon to these people. A toy. A string of characters with a value,” LulzSec says. “This is what you should be fearful of, not us releasing things publicly.”

Topics
Hackers have found a way to log into your Microsoft email account
U.S. federal court system cyberattack is worse than previously thought
Ransomware victims are refusing to pay — but is it working?
This anti-hacker group helps you escape ransomware for free
Best Gaming PC Deals: Save on RTX 3070, 3080, 3090 PCs
The 6 biggest problems with ChatGPT right now
Pro users are already unhappy with the upcoming Mac Pro
How to schedule an email in Outlook
15 years later, the MacBook Air could soon have its best year ever
How to watch Super Bowl 2023 on your computer
Microsoft Word vs. Google Docs
Turns out DirectStorage isn’t killing frame rates in Forspoken after all
Best laptop deals: Save on Apple, Dell, HP and Lenovo