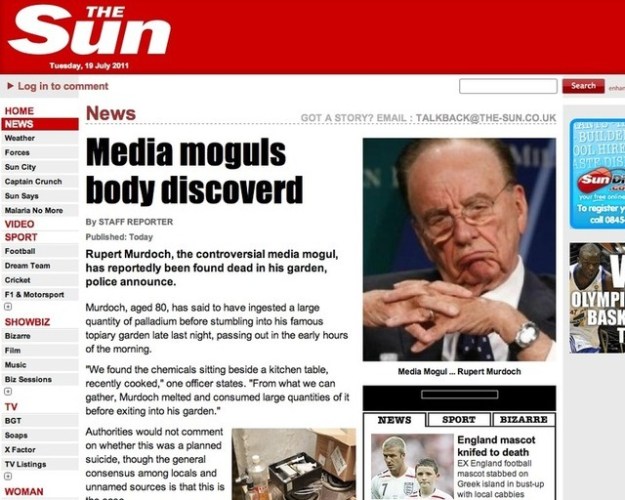 Hacking group LulzSec are back – and now it’s directing its attention toward Rupert Murdoch’s newspapers, which form part of his News Corporation media empire.

According to the Guardian, visitors to the website of the UK’s most widely read newspaper, the Sun, were redirected to a page with a report falsely claiming that the News Corporation chief Rupert Murdoch had been found dead in his garden. The Sun’s website has since been taken down by its owners.

The fake story explained that the newspaper mogul had ingested palladium, a radioactive poison, “before stumbling into his famous topiary garden late last night.”

The hack comes the day before Murdoch and son James (chairman and CEO of News Corporation’s Europe and Asia operations) are due to appear before British lawmakers on Tuesday to face questions about an unfolding scandal involving Murdoch’s newspapers, the British police service and politicians.

The scandal concerns the alleged hacking of cell phones by journalists and private investigators working for the now defunct News of the World newspaper in the late 1990s and early 2000s. There are also allegations that journalists paid police for information leading to stories. The controversy caused Rupert Murdoch to shut down the 168-year-old newspaper earlier this month.

But the remarkable story is unfolding day by day. On Sunday the UK’s top police officer, the commissioner of London’s Metropolitan Police, resigned in connection with the scandal. Shortly after, his deputy followed.

Last week, Rebekah Brooks, the editor of the News of the World for part of the time that the alleged phone hacking is said to have taken place, quit as CEO of News International, the British newspaper division of Murdoch’s News Corporation. Also last week, Les Hinton, who was CEO of News International during some of the time that the hacking is alleged to have taken place, resigned as CEO of Dow Jones, also owned by News Corporation.

And on Monday, in what will be seen by conspiracy theorists as an extremely sinister turn of events, the man who blew the whistle on the whole affair, former News of the World reporter Sean Hoare, was found dead in his home. Police are not treating the incident as suspicious.

Even the UK prime minister, David Cameron, is wrapped up in the affair, having employed another former News of the World editor, also working at the paper during the time of the alleged wrongdoings, as his PR guru. The former editor, Andy Coulson, was arrested by police last week, though up to now he has not been charged with any offense.

Last week it was reported that the FBI was investigating the possibility that News Corporation journalists may have tried to gain access to the phone records of victims of the September 11 attacks.

As for LulzSec, it was thought that the group had disbanded, but a tweet on its Twitter feed posted after the Sun hack read: “I know we quit, but we couldn’t sit by with our wine watching this walnut-faced Murdoch clowning around.” Another read: “We have owned Sun/News of the World – that story is simply phase 1 – expect the lulz to flow in coming days.”

At the time of writing, the Sun website is still down, as are the websites of Murdoch’s other UK newspapers, the Times and the Sunday Times.