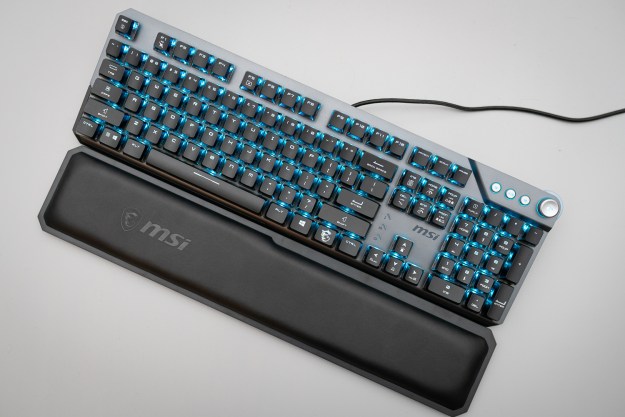 “The MSI Vigor GK71 Sonic is a beautiful keyboard that makes too many compromises.”

Gaming keyboards are a dime a dozen. Throw some mechanical switches on an aluminum body, add per-key RGB lighting, maybe pepper in media buttons, and you have the marks of one of the best gaming keyboards.

The MSI Vigor GK71 Sonic accomplishes this on paper, and even throws in a memory foam wrist rest. Coming in at only $110, it’s certainly a tempting purchase.

But with buggy software and a less-than-ideal typing experience, the Vigor GK71 Sonic falls flat. It isn’t a bad gaming keyboard, and with an update to MSI Center, it could be a good one. Right now, though, it’s disappointing.

The Vigor GK71 Sonic looks great, but practicality takes a back seat. After plugging it in, I was greeted with the brightest LEDs I’ve ever seen on a keyboard. The transparent bottoms of the keycaps let a lot more light shine through, but I’m worried about how long they’ll hold up.

It feels like the tops of the keycaps use ABS — fine, but PBT keycaps are the better option. The real problem is the bottom halves of the keycaps. They’re made of cheap acrylic. They feel like they’re just waiting to crack, which is worse considering the stem uses the same material. The tops and bottoms are separate, too, and you can feel a gap between them with a fingernail.

The idea of form over function carries beyond the keycaps. The two cable routing channels under the keyboard, for example, don’t hold the attached cable in place. And the wrist rest, although a welcome addition, doesn’t hook into the keyboard in any way. It just floats in the front, and it doesn’t feel nearly as nice as the wrist rest on the Asus ROG Strix Flare II Animate.

It’s not all bad, though. The aluminum frame brings a touch of premium flair to the Vigor GK71 Sonic, and the volume wheel looks great while subtly sticking out of the corner of the keyboard. The custom keycaps are great on the top, too, showing the additional functions of the keyboard separate from the manual.

The lighting is bright and beautiful. I type lighter on the Vigor GK71 Sonic because the keycaps worry me, but I can’t ignore the visual appeal the keycaps afford. The lighting is blinding at first, much brighter than the LEDs on the Corsair K70 RGB Pro. But if you’re a RGB-hungry PC gamer, the Vigor GK71 Sonic delivers in a way few keyboards can.

Overall, the Vigor GK71 Sonic looks better than it feels. The keycaps and plastic media buttons don’t feel as premium as they should, and the wrist rest, although a welcome addition, doesn’t feel like it’s built for the Vigor GK71 Sonic. The issues are offset by beautiful RGB lighting and an aluminum frame, but only by a bit.

The Vigor GK71 Sonic stands out with its unique switches. They aren’t just rebranded Cherry switches, either. They’re MSI’s own Sonic Red switches, supplied by Kailh, and according to MSI, they’re the world’s lightest switches.

That’s not entirely true. They are lighter than normal Cherry MX Reds, but there are switches available with identical specs. They have an operating force of 35 grams, which is 10 grams less than Reds. They’re linear, too, which should make for the ultimate gaming switch when combined with the low-effort actuation.

The switches are good for gaming, but there’s something wrong with the typing experience. I compared the switches to a couple of other linear keyboards I have — the Akko 3068B and HyperX Alloy Origins Core — and the Vigor GK71 Sonic felt subpar. The switches have an odd resistance to them, which consistently led to hesitation while typing.

This issue is even more pronounced considering how light the switches are. With less pretravel and a super light touch, I was making typing errors left and right. I typed this keyboard review on the the Vigor GK71 Sonic, and I’ve made more typos than I care to admit.

After about a week, when the switches were broken in, the typing experience was acceptable.

For what’s supposed to be the world’s lightest switch, the Sonic Reds feel surprisingly heavy. They’re not, but the combination of resistance from the stem and the onslaught of typos fatigued my hands while tying on the Vigor GK71 Sonic. The lighting doesn’t help, either, making the keycaps wash out in a sea of RGB whenever you look down.

After about a week, when the switches were broken in, the typing experience improved a bit. But that’s not the issue with the the Vigor GK71 Sonic. Other name-brand keyboards like the Corsair K100 RGB come with multiple switch options, while the Vigor GK71 Sonic is limited to the Sonic Reds.

Hot-swappable key switches, like those offered on the Logitech G Pro X, would’ve solved the problem. Unfortunately, the gaming keyboard industry hasn’t caught up with this trend, and the Vigor GK71 Sonic isn’t starting that process.

While the typing experience isn’t great on the Vigor GK71 Sonic, the gaming experience is better — though it still has a number of issues. I like the light touch on the switches, but the previously mentioned switch resistance was a minor annoyance that was easy to overlook compared to typing.

The wrist rest was a joy to have supporting my palm while gaming.

This is a solid gaming keyboard if you’re only focused on gaming. I need a balance between gaming and typing, making the multiple switch options on the $120 Logitech G513 Carbon much more attractive.

I like the wrist rest, and it comfortably supported my palm while gaming. The only issue I encountered was a slight drift away from the keyboard. The wrist rest has rubber feet on the bottom to keep it from sliding, but my long gaming sessions still ended with it about an inch away from the body. It’s not a big deal, but I would’ve preferred some way to lock the wrist rest to the body.

Outside of playing games, the Vigor GK71 Sonic has a couple of unique gaming features. There’s dedicated Windows lock, as well as a hot key to launch MSI Afterburner.

The volume wheel was a joy while gaming, too — even with bullets whizzing past, I was able to quickly adjust my volume without a second thought.

My first impressions of MSI Center is that it is rough. This is the software you need to control the lighting, key assignments, and everything else about the Vigor GK71 Sonic. You have to install it through the Microsoft Store, and mine was caught in an installation loop — three times, actually, before it started working.

After digging through the reviews on the Microsoft Store, I realized why I was stuck in an infinite installation loop. MSI Center fails to install the correct components.

I’m not happy that half of the functionality is roped off by broken software.

My installation only allowed me to record macros, and the Microsoft Store reviews suggest I’m not alone. Worse? Some of the reviews are two months old. I asked MSI for a newer version, perhaps one that would work, but the point remains. If I spent $110 on this keyboard today, I wouldn’t be happy that half of the functionality is roped off by broken software.

To be clear, this is an issue with the Microsoft Store. I’ve used MSI Center before, and it’s one of the better all-in-one apps you see from PC part makers (though, not quite as good as Corsair iCue). Still, MSI chose to push users to the Microsoft Store instead of providing a direct download.

After a couple of hours of attempts, I was left with a network error on the Microsoft Store that wouldn’t let me proceed with the download and provided no way to remove the files I had already installed. I eventually tracked down a download for MSI Center for a separate product, but I was met with the same installation loop.

I’ll update this review once a public version of MSI Center works as it should.

The MSI Vigor GK71 Sonic looks great, but its long list of minor issues hold it back. The keycaps are attractive, but I’m worried about their durability, and the lighting is gorgeous, but it’s locked behind the whim of the Microsoft Store. The uncomfortable typing experience is what kills the GK71 Sonic for me, though.

If you’re only focused on gaming, the Vigor GK71 Sonic is about $10 cheaper than the competition while packing in features of keyboards that are $50 to $60 more expensive. That’s a feat on its own, but the experience suffers as a result of packing all of those features in.

While $110 is an attractive price for a full-size mechanical gaming keyboard, there are several alternatives that are around $10 to $20 more expensive:

MSI’s bespoke switches are rated for 70 million key strokes, so they should last long after you pick up a new keyboard. The keycaps concern me, though. The oils from your hands could work their way between the two sections, potentially causing splitting or cracks. Thankfully, an extra set of keycaps only runs about $20.

No. There are better options out there that are well worth the extra $10. The rare exception might be for gamers only, where the Vigor GK71 Sonic is cheaper than the competition and works like a treat. That is, if MSI Center gets fixed sometime soon.

Topics
ViewSonic’s new mini-LED gaming monitor looks like 34 inches of curved glory
Why Drop’s new custom mechanical keyboard is such a big deal
The best Razer keyboards to buy in 2022
This half-sized micro-keyboard is a dream come true for PC gaming on the go
Apple will pay $50M to settle the butterfly keyboard fiasco
This 15-inch Windows laptop is a great buy while it’s just $139
Get Samsung’s 49-inch Odyssey G9 Monitor for under $1,000 today
Why Starlink download speeds are experiencing double-digit dips
Hackers just stole LastPass data, but your passwords are safe
Best Chromebook deals: Get a new laptop from $99
Best laptop deals: Save on Apple, Dell, HP and Lenovo
Best MacBook deals: Save on MacBook Air and MacBook Pro
Best Dell XPS deals: Save on XPS 13, XPS 15 and XPS 17