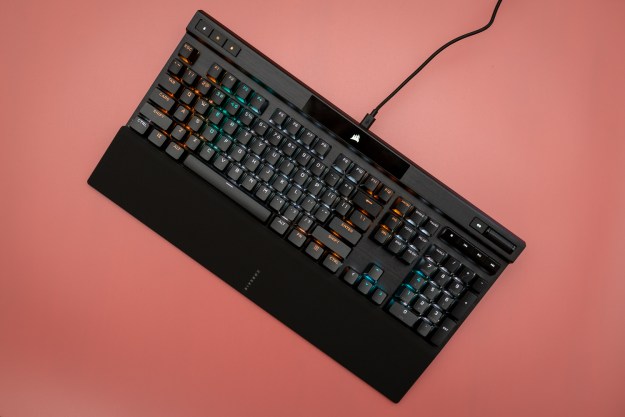 “The Corsair K70 RGB Pro is a solid gaming keyboard, but it's starting to feel stagnant.”

The Corsair Vengeance K70 was the first mechanical keyboard I ever owned. At the time, it was the uncontested champion of mainstream gaming keyboards, fitted with an aluminum frame, genuine Cherry MX Red switches, and either red or blue backlighting.

But it has been almost nine years since Corsair launched the K70, and we have seen countless iterations since. Now, we have the Corsair K70 RGB Pro, announced in time for CES 2022, which is a keyboard that takes the best of previous versions and puts them in a single spot.

It’s fundamentally a great keyboard because it’s built on the base of one of the best gaming keyboards ever made. But it also feels stagnant, caught up in the design language and features of years past. It’s an improvement over previous versions, but it’s no longer the landmark product Corsair released in 2013.

If you’ve seen any of the previous K70 versions, you’ll have a general idea about the design of the K70 RGB Pro. It’s still built on a brush aluminum frame with per-key RGB lighting, with the light spilling out thanks to the flattened key bed. This may be a design from 2013, but it still looks great in 2022.

There are some notable changes, too. My favorite, and the one you’ll notice immediately, is the detachable cable. The K70 RGB Pro uses a detachable USB-C cable that fits into a slightly embedded hole in the board. The function buttons on top of the board are flatter and pushed to the edges, and the RGB Corsair name has been replaced with Corsair’s flag logo. Next to this area, you’ll also find your status indicators (caps lock, etc.), cleaning up the top portion of the board a great deal.

I love these changes. But the design hasn’t improved across the board. The plastic wrist rest that has come with previous versions of the K70 is present again. It’s now longer and has a slight redesign, but it still haphazardly snaps to the bottom of the keyboard with magnets. Where’s a pleather wrist rest like Corsair’s own K100 RGB offers?

The cable channels underneath the board are helpful for routing, but they’re still a pain to use. I struggled to snap in the braided USB-C cable included in the box, which itself is stiff with chunky connectors. Even the budget-oriented Akko World Tour includes a cable that doesn’t stick out of the back of the board.

I’m nitpicking, but not just for the sake of it. At $160, Corsair is pitching a premium wired gaming keyboard with the K70 RGB Pro. It doesn’t feel nearly as premium as it could, taking inspiration from K70 models from years past rather than where the rest of the mechanical gaming keyboard market is at.

Although I have some issues with the design, there’s no doubt that the K70 RGB Pro is a great looking keyboard. Corsair clearly took time to make a keyboard that’s familiar but refined, and aesthetically, it looks great. Form and function meet with the K70 RGB Pro, but form still takes priority.

The K70 RGB Pro has some cosmetic changes, but many of the additions are under the hood. Perhaps the biggest difference is the AXON processor, which enables a polling rate of 8,000Hz on the K70 RGB Pro. Most gaming keyboards only reach 1,000Hz.

That’s a plus, but only for machines that meet the recommended spec. Yes, this gaming keyboard has its own recommended specs. For 8,000Hz, you’ll need a 9th-gen Intel i7 or 2nd-gen AMD Ryzen 7, or newer. The keyboard still works with older CPUs, but you’ll be locked to a lower polling rate (2,000Hz if you have less than an i5 or Ryzen 5 from the above generations).

Corsair got the features right years ago.

One of my favorite features is the tournament switch. Corsair introduced this feature with the K70 RGB TKL, and I’m happy to see it present here. Flipping the switch disables custom actions and macros, changes the backlighting to a static color, and disables profiles. It’s a nice feature to have around if you find yourself in competitive settings, though I imagine most users will leave it turned off.

As is the case with other Corsair peripherals, the K70 RGB Pro offers per-key RGB lighting, macros, and up to 50 on-board profiles, all enabled by Corsair iCue. I’ll talk more about iCue in a later section, but spoiler alert: It’s really good.

Otherwise, the keyboard is the same as previous models, which isn’t a bad thing. You still have access to a smooth metal volume wheel, full media buttons, on-board profile selection, and a dedicated Windows Lock key. Corsair got these features right years ago. There’s no reason to change them.

Keeping with the tradition of K70 models past, the K70 RGB Pro features a variety of Cherry MX switches. You have the choice between Reds, Browns, Blues, Silent Reds, or Silent Silvers, and as I do with every mechanical keyboard, I went with the Browns.

I was a little disappointed switching over to the K70 RGB Pro after using the Glorius GMMK for a couple of months. I’d forgotten the distinct feel of Cherry Brown switches over their Gateron counterparts, which I have installed in my GMMK. The Cherry switches feel stiffer, as if dust has worked its way into the switch housing.

This isn’t on Corsair. This is how Cherry Browns are, and a lot of people like them this way. For me, I would want to lube the switches of the K70 RGB Pro to get them closer to the smooth feel of the Gaterons.

Even if you like Cherry Browns (or the other switches the K70 RGB Pro can ship with), they expose an issue with the K70 RGB Pro. It doesn’t have hot-swappable switches. This is still mostly a niche feature, but it shows up on keyboards that cost around $50 less than the K70 RGB Pro – the Glorius GMMK, Akko 3068B, and Keychon K8, to name a few.

There are some mainstream options with this feature, too. Hot-swappable switches are also available on the Logitech G Pro X and Drop CTRL. This feels like a missed opportunity. This is supposed to be the Pro version of the K70 RGB, and hot-swappable switches would go a long way to differentiate the keyboard from competitors like the Razer Huntsman V2.

Hot-swappable switches may have been a missed opportunity, but don’t let that distract from the K70 RGB Pro’s gaming prowess. This is an excellent gaming keyboard. I used it exclusively for gaming over the course of a week, and it felt like revisiting an old friend. It’s comfortable, responsive, and the RGB lighting looks great.

You shouldn’t get too caught up in the polling rate, though. The K70 RGB Pro can report inputs at up to 8,000Hz. Between the higher polling rate, improvements in debounce delay, and input processing time, Corsair says that it can achieve latencies of less than 0.25ms. Corsair claims that other performance-focused gaming keyboards can reach up to 2ms of input latency.

For most people, the 8,000Hz polling rate doesn’t make a difference.

Latency makes a big difference in competitive games. But the polling rate doesn’t feel like a defining feature of the K70 RGB Pro. The K70 RGB TKL and K100 both come with the same 8,000Hz polling rate, and the TKL model is probably better suited for competitive settings. Meanwhile, we don’t have a wireless version of the K70. Corsair recently introduced the Sabre Pro Wireless, which is a wireless version of Corsair’s competitive gaming mouse. I hoped the K70 RGB Pro would be a similar update.

An 8,000Hz polling rate makes a difference in latency, but that doesn’t matter for the majority of people From Halo Infinite to Destiny 2 to Valorant, I never noticed the difference between 8,000Hz and 1,000Hz. The higher polling rate seems better suited for mice, where minute inputs can make the difference.

Where 8,000Hz becomes problematic is with the system requirements. The K70 RGB Pro is releasing amid the worst chip shortage we may have ever seen. Outside of the fact that the higher polling rate doesn’t matter for everyone aside from the most competitive gamers, I’d wager that a lot of gamers don’t have the necessary hardware to use it. You can always default to 1,000Hz, but then you’re wasting money.

As it usually does, software makes the difference for the K70 RGB Pro. If Corsair didn’t have iCue, I’d give the K70 RGB Pro a lower score. It’s easy to complain about the lack of hot-swappable switches, the cheaper-feeling wrist rest, and the lack of wireless. But keyboards that offer these features for the same or less usually come with terrible software.

iCue isn’t only good, it’s the best peripheral software available. I don’t even use Corsair peripherals with my personal rig, but I still use iCue to adjust my fan, GPU, and motherboard lighting.

Lighting is the main draw. iCue has almost an infinite number of ways to customize your RGB on a per-key basis, and it includes several pre-baked effects that look amazing. For the K70 RGB Pro, in particular, you can add up to 20 lighting layers at the same time.

I use iCue daily even without a Corsair keyboard and mouse.

As with other Corsair keyboards, you can remap any of the keys, and you can set up infinitely long macros. You can store all of your iCue adjustments into 50 onboard profiles, allowing you to take your lighting, macros, and everything else between devices without downloading iCue.

In fact, you don’t need to use iCue at all. You can still record macros and adjust lighting effects on the K70 RGB Pro, even if it’s more limiting than using the software. Corsair has the best peripheral software on the market, but it doesn’t force you to use that software. That’s an approach I can get behind.

You absolutely should use iCue, though. I use it daily even without a Corsair keyboard and mouse, which should speak volumes about how great it is. It’s complex, but it never sacrifices intuition for that complexity.

The K70 RGB Pro is a great gaming keyboard, but it’s not the landmark product Corsair released years ago. It basically adds a number pad to the K70 RGB TKL, which most gamers don’t want. It’s not bad, but it’s too iterative to justify the high price Corsair is asking, especially in the crowded mechanical keyboard market of 2022.

The Razer Huntsman V2 is the most direct competitor thanks to its 8,000Hz polling rate.

I’d also recommend the Corsair K70 RGB TKL, though. It’s as much as $60 cheaper, and it doesn’t have a number pad taking up precious mouse space.

Cherry MX switches are rated for 60 million keystrokes, so the K70 RGB Pro could last as much as a decade or more. You’ll probably want to upgrade to a new keyboard before the switches give out.

No, buy the Corsair K70 RGB TKL instead unless you absolutely need a number pad. The K70 RGB Pro isn’t a bad keyboard, but it’s not worth its asking price.