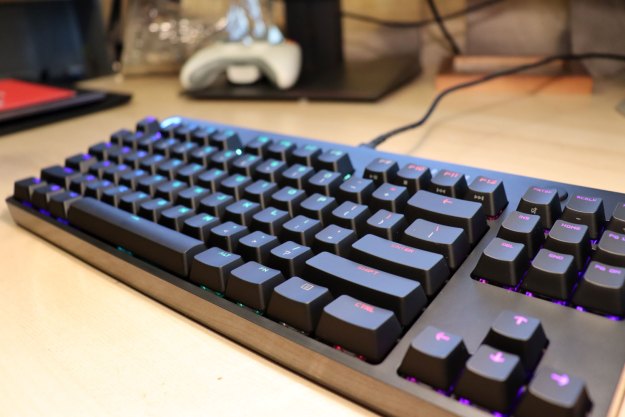 “Swappable switches give this keyboard an indefinitely long lifespan.”

Forget dogs, mechanical keyboards are mankind’s best friend. They’re fast, comfortable, and accurate, and they last for years. But after tens of millions of key presses, even they start to wear out, and you invariably need to buy another board.

Logitech’s G Pro X gaming keyboard turns that paradigm on its head, by introducing not only swappable keycaps, but swappable switches too.

Available with Logitech’s own brand of GX Blue, Brown, or Red switches, the Pro X comes with a switch removal tool which lets you swap out for any of the other switch options whenever you like. With a detachable USB cable and a robust design, the Logitech Pro X could be the first high-end gaming keyboard that never grows old.

Logitech is well aware that most keyboard users won’t ever need to swap out their keys. It sells the Logitech G Pro for that very reason — it’s the exact same keyboard, but its switches are hard soldered to the board instead. But for those who want the option of changing out their switch types — say having red switches on the arrow and number keys, but blue or browns for the alphabetical portion of the board — they can do so with the G Pro X.

Should an individual key die on your new keyboard because of a faulty switch, or just because you happen to like smashing your fingertips into one particular key when you’re frustrated, then you don’t need to swap out the entire keyboard. You can just replace the switch in a matter of seconds, and get back to gaming. Or typing. Or angrily smashing.

The Logitech G Pro X might be the last keyboard you ever buy./pullquote]

Chances are most people will want to upgrade their keyboard for new features well before their switches start to die. But if you try the Pro X and like what you see and feel, then being able to keep it alive indefinitely with new switches is a unique feature which could cater perfectly to that subset of gamers. There’s nothing stopping Logitech introducing new switch designs in the future either, making this a great future platform for Logitech fans.

The process for swapping out the switches is relatively simple, if a tad fiddly. Logitech bundles a white, plastic tool for the job which doubles as both a keycap remover and switch remover. There’s no real difference in the motion, you simply press the tool down, give it a little wiggle to get both sides of the clip in place, then squeeze and pull.

Keycaps pop off easily and switches aren’t much harder to remove. You then replace them by lining up the alternative switch’s twin metallic pins with their respective holes on the board and push into place.

When it clicks, you’ve just replaced your switch. It took me 10-15 seconds to replace one switch, so doing an entire keyboard wouldn’t be much fun. But I wouldn’t want it to be much easier, or I’d be concerned that switches could come loose during heavy usage or transit.

Elsewhere with durability in mind, Logitech made sure this keyboard has a detachable micro-USB cable, so that it can’t be ripped out during transit. Or, once again, if your cable ever becomes damaged, you can easily replace it without buying a new board.

It is, however, Logitech’s own design with a couple of side-prongs for additional stability. But I tested it with some generic micro-USB cables I had lying around too, and they worked just as well.

What’s in a switch

Traditionally, mechanical gaming keyboards have been built using switches manufactured by Cherry, with MX Blue, Brown, Red, and Black being the most popular. That’s still common today, but following shortages a few years ago, a number of keyboard manufacturers, Logitech included, started developing their own switches. That lead to the creation of Logitech’s Romer G switches, and more recently its GX switches, which feature in this keyboard and more closely resemble Cherry MX’s original line.

In fact, they’re almost identical. They have some minor variations in actuation height, actuation force, and travel distance, but for all intents and purposes, they’re the same switch. That might not be exciting in terms of pushing switch technology forward, but it introduces a number of important advantages this keyboard has over other, more bespoke switch designs. Especially since they’re swappable.

For starters, it means that anyone who’s used to Cherry MX-powered keyboards will know what they’re getting with the Pro X. It also means that Cherry MX switches should be compatible with the Pro X, as Toms Hardware confirmed, so if Logitech stops making its GX switches for whatever reason, you could get hold of some Cherry MX ones to swap in instead. Arguably more importantly though, this means that the Logitech Pro X and its switches, are fully compatible with custom Cherry MX keycaps. If you have a fully customized Cherry MX board and want to move over to the Pro X, you can bring all of your keycaps with you.

What Logitech did change with these switches, is their method of attachment to the keyboard itself. Where traditional switches (and those in the standard Logitech G Pro) are soldered to the keyboard itself, the Pro X uses a specialized socket system. Upon our questioning, Logitech confirmed that this socketing system introduces no durability issues, with the Pro X passing the same tests that its other keyboards do, before going on sale.

When you do come to replace the switches (because if you don’t plan to there’s little point in buying this board over the cheaper, standard Pro) you can buy bespoke switch kits directly from Logitech. They’re priced at $50 each and come with 92 switches, enough to replace the entire keyboard and still have a handful left over as spares.

All the pros and cons of mechanical

Outside of the ability to swap out the switches, the Logitech G Pro X is a solid, tenkeyless mechanical gaming keyboard. It’s gorgeous to type on and game with. If you like the numpad section, this isn’t the keyboard for you, as its compact design necessitates ditching those extraneous keys. That does give the board a very clean, minimalist look, though. There’s no overblown gamer styling and, crucially for those wanting to keep this board for years to come, very few nooks and crannies for dust and debris to get stuck in, making cleaning simple and effective.

There are also no dedicated macro keys, although the support for Logitech’s stellar G Suite means you can remap the F keys to whatever you like. I would have liked to have seen more customization options there, as with small hands, F keys aren’t the easiest for me to reach in a frantic game or lengthy Photoshop session.

The RGB lighting is much more customizable, but it’s not perfect either. The LEDs are bright and can be changed to any of millions upon millions of colors, so you can animate them to scroll, wave, ripple, or anything else your heart desires.

Since the underlying switches mirror those of Cherry’s designs, however, they are susceptible to the same problematic keycap lighting coverage. That is, that the top of the switch is the only portion that’s illuminated. That’s perfectly fine for every key’s normal function (Logitech made sure that its number keys all feature the designation at the top, for this very reason) but the designations for secondary functions, like the @ symbol or the media controls, remain frustratingly unlit, because they occupy the bottom half, or even user-facing portion, of the keycaps.

This is something that Logitech has fixed with its own Romer G switches, which have a centrally (rather than top) mounted LED. It’s a shame that there isn’t a better solution to this issue and I wish Logitech had figured out some way to highlight the media keys a little better. In a well lit room, it can be hard to see what functions do what. If you’re in a dark room, it’s impossible.

Lighting can be switched on and off with a physical button on the Pro G itself, alongside which you’ll also find the Game Mode button. That locks down the Windows key and a couple of others by default, making them non-responsive while you game. As with everything else about the Pro X, you can customize which keys are turned off to your preference and then save that profile in the board itself, to take with you wherever you go.

And no matter where you do go, this board won’t move an inch unless you want it to. The rubberized feet on both the board itself and its extendable legs mean that it doesn’t slide anywhere, no matter how hard you use it.

The Logitech G Pro X mechanical gaming keyboard doesn’t reinvent the wheel, but it does make it entirely replaceable piece by piece. Logitech claims the switches can be replaced over 100 times without any dips in durability or usability, which means that as long as nothing else comes along that you want instead, this could be the last keyboard you ever buy. The lighting isn’t perfect, (I ran into a few issues with it sometimes turning off for no reason) and I prefer dedicated media controls, but other than that, there’s little to complain about.

Yes, and no. There are no other keyboards of this quality that let you swap the switches out. If you don’t care for that feature, though, then the standard Logitech G Pro is identical to this one and it costs less too. If you just want a great tenkeyless mechanical gaming keyboard, then you could also check out the Cooler Master MasterKeys Pro S RGB keyboard, or the Razer BlackWidow X Tournament Edition. Both are excellent mechanical boards with RGB lighting and compact frames, and competitive pricing.

In theory, forever. While spilling a beer over the board might see it give up the ghost, switches and cables are the easiest parts of any keyboard to damage and if you do that with the Logitech G Pro X, you can just replace them. While we’re sure that some feature(s) will come along in the future that you’ll want to upgrade for, in every other respect, the Logitech G Pro X should last as long as you want it to.

Yes. If you like the idea of being able to chop and change switches as you want for customization or improved longevity, then this is the ideal mechanical board for you.

FAA review of SpaceX Starship launch delayed by another month