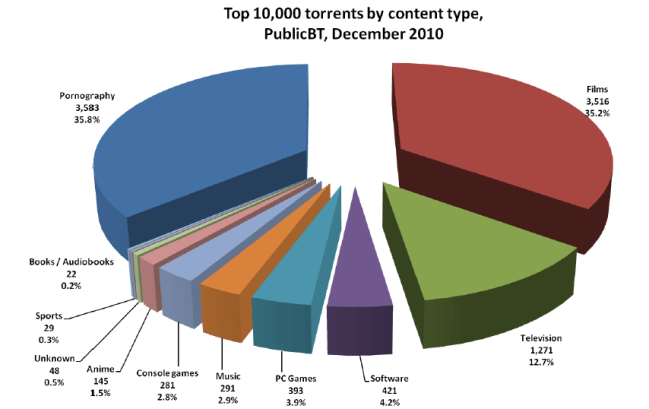 Before iTunes and eMusic and long before Pandora and Spotify, Napster, for a brief period of two years or so, reigned as the Internet’s most popular record store. Except, of course, for the fact that no money ever changed hands; Napster was the first free file-sharing website in what would become a boom era for music piracy.

So have years of threatened lawsuits goaded music fans into adopting legal alternatives (iTunes, eMusic, Amazon MP3) for their downloading pleasures? Perhaps. But it’s also likely that the rise of free legal streaming services (Spotify and Pandora, for example) have made piracy more trouble than it’s actually worth.

Even as online music is increasingly more mainstream-capitalist and less underground-pirate, the threat may not be as benign as Envision’s study makes it seem. In a response to the findings, BitTorrent blog TorrentFreak pointed out that Envision determined its 10,000 most popular files by the number of leechers, people in the process of downloading a particular file, attached to files and not by the number of completed downloads. Owing to the fact that movie files are generally much larger than music files — 1.73GB to 214MB, respectively — movies are downloaded at a much slower rate than music and therefore tend to have more leechers at any given time.

“If the top 10,000 was based on actual completed downloads the percentage of music torrents would have been much higher,” TorrentFreak said. “We’re of course not arguing that more people download music on BitTorrent than movies, but based on the above it seems likely that the difference between the two categories in “actual” popularity (completed downloads in a given time) is being misrepresented.”

So far the movie industry (porn industry excluded from this discussion) has adopted an approach that used to be a standard for the music industry: lawsuits, both threatened and prosecuted. Last year, the filmmakers behind “The Hurt Locker” launched a massive legal campaign directed at those suspected of illegally downloading the movie via BitTorrent. Since then, others in the film industry have followed the example. However, if the movie industry wants to really curb piracy they’ll have to drop the saber rattling and embrace alternative ways of delivering their content to the masses. It may not be easy or as a profitable as some would like, but it’s almost certainly cheaper than watching piracy numbers rise.

Ranking all 12 versions of Windows, from worst to best
Microsoft Word vs. Google Docs
How to schedule an email in Outlook
The 6 biggest problems with ChatGPT right now
This 8K monitor has 3D tech that can be viewed from all angles
Microsoft continues its unabashed embrace of ChatGPT and AI
Don’t fall for this Mac Mini M1 deal — buy this instead
No, AMD CPUs and GPUs won’t get cheaper — the CEO reveals why
Best Gaming PC Deals: Save on RTX 3070, 3080, 3090 PCs
Don’t miss this Samsung Galaxy Book 3 Ultra pre-order deal
Experts fear ChatGPT will soon be used in devastating cyberattacks
Lenovo’s Surface-style Chromebook just got a big price cut
Save $620 on this Lenovo gaming laptop with an RTX 3070