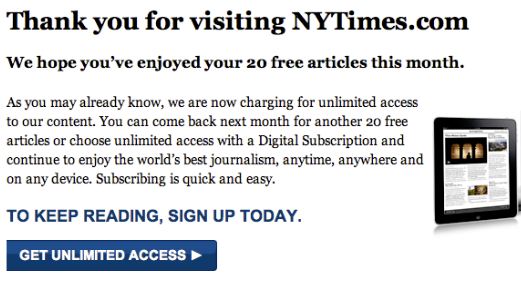 Yesterday, The New York Times erected a paywall around nytimes.com to encourage regular visitors to enroll in one of three paid subscription plans. While reactions to the paywall have tended towards the negative, it’s hard to accuse The Times of being ungracious about its implementation.

While users who access more than 20 articles per month directly through nytimes.com are be required to subscribe, The Times also included a provision to permit access to five additional articles if the content was reached through a search engine. And users can access an unlimited number of articles so long as they do so through links posted on blogs or social networks like Twitter of Facebook. The Gray Lady even went an extra step and offered all three subscription plans for $0.99 for the first four weeks.

Even so, some loyalists are still upset at having to pay for something they have been accustomed to getting for free. Mashable has posted a couple of simple ways to get around the paywall in a matter of seconds. One method involves removing “?gwh=numbers” from the URLs, which will prevent the site from tracking how many articles have been accessed. Other, even easier methods that reportedly work include clearing browsers’ caches or simply switching browsers altogether.

It’s not clear how much paywall “hacking” The Times is willing to tolerate. But given the relative ease, it’s hard to imagine that a high level of paywall-dodging was not anticipated by engineers.

The Onion, in its infinite satirical wisdom, offered this take on the paywall: “NYTimes.com’s extremely risky new approach to commerce—wherein legal tender must be exchanged in order to receive a desired service—could drastically reduce the publication’s readership.”

The best password managers for 2023
This ChatGPT scam duped thousands of people into downloading fake app
What is Reddit?
How to send a text message from your email account
Here’s why ChatGPT might be ‘at capacity’ for you right now
The best color laser printers for 2023
Best MacBook Deals: Save on MacBook Air & MacBook Pro
Dell Laptop Deals: Save on XPS 13, XPS 15, XPS 17 and more
How to sync your Outlook calendar with an iPhone
Best gaming laptop deals: Save on Alienware, Asus and more
Best Alienware Deals: Save on gaming laptops, PCs and monitors
This huge password manager exploit may never get fixed
Best 17-inch Laptop Deals: Get a large laptop for $330