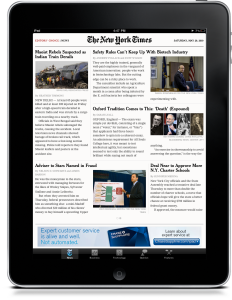 At 2 o’clock this afternoon, The New York Times‘s online home, nytimes.com, will begin requiring that “heavy consumers” pay to continue accessing content on the site. In order to help users acclimate to the idea, The Times will be initially offering deeply discounted subscription plans of $0.99 for the first four weeks of access. After the first month is up, users will begin paying the full amount for their subscription plan of choice.

Here’s how the three plans that The Times is offering break down:

All plans will be initially offered for $0.99 and all will include unlimited access to nytimes.com through mobile Web browsers (just not necessarily access through native apps). Those with print subscriptions to either The New York Times or to The International Herald Tribune will be granted full access to all digital content without having to pay any additional fees.

Non-subscribing users will be allowed to access up to 20 articles a month before being required to pay for additional access. The paywall structure does include a significant loophole of sorts: content that is accessed through blog links or social media sites won’t count against the 20-per-month limit. That means that if you’re willing to comb through Twitter for your news fix (as many of us are already in the habit of doing), you can effectively continue to get free, unlimited access to nytimes.com — just without the convenience of being able to do so directly through the site’s homepage.

How to add external games to your Steam library
How to use clipboard history in Windows
Twitter is building a menu option for Twitter Shops
This new Windows 11 feature will help you protect your passwords
Lenovo Legion i7 gaming PCs and laptops both got massive discounts
Lenovo’s ThinkVision ultrawide curved monitor is 40% off today
When is the best time to post on Facebook?
The classic Macintosh was just redesigned by AI — and it’s beautiful
Best gaming monitor deals for October 2022
Nreal’s Air AR glasses head to the U.S., ready to rock with iPhones
Three ultra-rare RTX 4090 GPUs are hidden in Cyberpunk 2077
ViewSonic’s new mini-LED gaming monitor looks like 34 inches of curved glory
Intel Raptor Lake CPUs: Everything we know about the 13th-gen processors