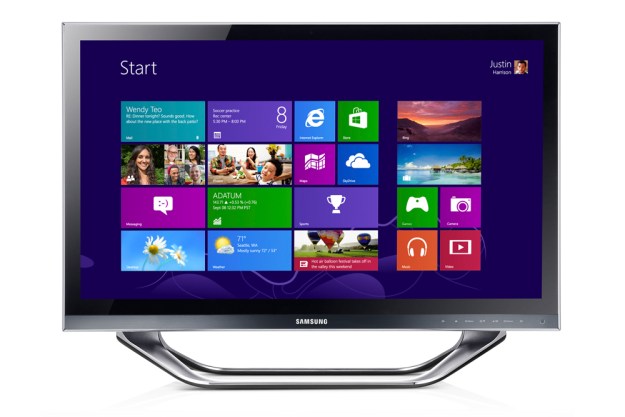 Samsung Series 7 All in One
MSRP $1.00
Score Details

“The Samsung Series 7 all-in-one is an attractive machine with good features hampered by below average performance and a slightly marred display.”

Creating an all-in-one that is both affordable and worth owning can be a challenge for PC makers. You have laptop-like limitations in terms of size and placement of parts coupled with desktop expectations from consumers in terms of price and performance. Samsung’s Series 7 (DP700A3D) all-in-one is trying to strike that perfect balance. It costs $1,100 and includes a touchscreen, gesture control, and 1080p resolution. That’s pretty tempting, as is the attractive exterior. However, there are other factors to consider before you give in to the Series 7’s siren song.

The Series 7’s design is streamlined, but it doesn’t stand out among other all-in-ones today. All of the computer elements are built into the display part of the machine, leaving the stand to be just a stand. Covered in metallic paint, the stand has two long feet, giving the Series 7 a sturdy base. Unfortunately, there’s no height adjustment available, only a limited tilt range.

Given the price, the Series 7 just doesn’t possess that high-end look that we see with all-in-ones like the new iMac or Dell XPS One 27. That being said, the aesthetics of the Series 7 are still attractive, and we’re fans of the overall elegant look and clean lines. What’s disappointing are the more practical design missteps.

The ports in the back all point down instead of facing out, so they’re harder to see and access. The ports along the left edge should be easy to access. Instead, we had to slide the unit around to see them each time we wanted to connect something.

The back ports include Ethernet, HDMI-in and HDMI-out, and three USB 2.0 ports. The left side quick-access ports include a 3-in-1 memory card slot, two USB 3.0 ports (one for charging small gadgets), and mic and headphones jacks. On the right side sits a Super Multi Dual Layer DVD +/-RW optical drive. All standard enough.

HDMI-in is a nice inclusion on a system like this as it allows users to connect game systems, media streamers, and even other computers to the Series 7. Multi-functionality is highly valued where space is at a premium, such as dorm rooms and efficiency apartments.

Twenty-three-inch displays are pretty standard on all-in-ones – and for good reason. This size offers plenty of screen real estate, looks good with a full HD resolution, and means the system isn’t too heavy to move around if needed. The Series 7’s display also comes with touch, a nice feature for something this affordable. We found touch functionality responsive and accurate, even on the desktop side of Windows 8.

The touchscreen does cause some issues with display quality. Text and small elements aren’t as crisp as we’d expect with a 1080p resolution. There’s a visible dot layer on top of everything that makes the screen appear less clear. It doesn’t interfere with color depth, black level, or contrast, but it’s more noticeable on screens with more white.

It doesn’t help that the display isn’t very bright, which made watching videos with dark scenes less pleasant than we’d like. The glossy coating further interferes since it easily kicks back reflections. Since viewing angles are fairly wide, watching video in a dark room should be enjoyable, even if you sit on a couch a few feet away.

Two speakers face downwards from the bottom edge of the machine, which isn’t usually the best placement. However, we didn’t find the sound affected much by this. We were able to hear music and video clearly at just 50 percent volume, even in a noisy environment. Audio quality is passable, but it’s not high-end. We clearly heard the separation of two channels but, overall, the audio lacked roundness. Output through headphones and external speakers is better.

Since the Series 7 can be used as a monitor separate from the computer inside via HDMI-in, we’re glad to see that Samsung did include controls on the front of the computer for settings. Users can adjust brightness and  contrast, change the input source from HDMI to PC, control volume, and pop open the optical drive drawer.

If a touchscreen isn’t futuristic enough for you, Samsung also included gesture control on this PC that are similar to the gestures for the company’s televisions. Gesture control will probably make you feel a bit silly at first, but you’ll get over it. For normal operation, the gestures aren’t that useful. We had to turn the feature off when we were sitting in front of the computer because it kept accidentally mistaking our face for a hand – turning on, and interfering with the mouse. Plus, the gestures don’t work that well when you’re close to the screen.

Sit a bit farther back and the real purpose of the gestures gets clearer. You have the ability to go to the Start screen, swipe left and right, click (by making a fist!), and turn volume up and down. These functions are extremely useful when controlling a media-playing app from the comfort of the couch.

We tested this with Netflix, and the results were encouraging. Since the Windows 8 app has big, chunky elements, it was easy to browse, find a video to watch, and start it all without having to touch the PC. Pausing was a little more difficult since the element is small and the gesture mouse isn’t very precise. On a machine that can also double as a media center, this is a nice touch.

While gesture-based controls are neat, you’ll use the included wireless keyboard and mouse to interact with the Series 7 most of the time. Both are solid and come pre-paired with the all-in-one, so you only need to turn them on. We’re not pleased that the wireless receiver for these peripherals takes up one of the USB 2.0 ports in the back, but at least the mouse and keyboard both connect to the same one receiver.

The keyboard, a standard model, has island-style keys with good tactile feedback. It lacks a dedicated number pad, which is an odd omission even for a consumer device. Along the top row are media controls and other shortcut buttons that require the use of the Fn key. Except that it’s designed to work for both right and left-handed users, the 3-button laser mouse offers no surprises.

If you’ve ever owned or used a Samsung smartphone or tablet, then the pre-loaded apps on the Series 7 will be familiar. The company continues its penchant for S branding, offering apps like S Note, S Camera, and S Gallery as basic accessories with some extras. We had fun with S camera, for instance, which gives users extra tools for making pictures more fun. Other apps and utilities stand out for more practical reasons.

The Quick Starter looks like one of those Dock programs so popular on Windows 7 and yet rarely useful. On Windows 8, however, it does serve one good purpose: bringing back the Start menu. You can also launch other Samsung apps and utilities, but the Start menu is likely the only reason most people use it. Looking just like the Windows 7 version, it gives transitioning users an easy way to launch programs and find files.

Another utility of note is AllShare Play, Samsung’s proprietary brand name for their DLNA technology. In general, DLNA makes it easy for computers to connect to each other or to mobile devices in order to share media such as video, music, and pictures. AllShare specifically ensures that Samsung PCs, phones, and tablets can all talk to each other and even share screens.

We like that the company ties together its disparate products in this way so that media, even DRM media, isn’t trapped on one device. We don’t like that it requires signing up on a website to get it working on the PC side.

Not as powerful as it could be

Our review unit, the Series 7 DP700A3D, comes with a 2.9GHz Intel Core i5-3470T CPU backed by 6GB of RAM. The CPU is solid but not clocked very high, resulting in slightly below average performance. The all-in-one turned in a combined score of 52.1 GOPS in SiSoft Sandra’s Processor Arithmetic bench, and a score of 9798 in 7-Zip. Most desktop computers, including all-in-ones at around the same price, like the HP Envy 23, do better.

PCMark 7 came to a final score of 2,869 – which, again, is below the Envy 23. Here the lack of a solid-state drive is part of the reason. Samsung opted to give this all-in-one a large 1TB traditional hard drive to keep costs down.

We found the machine runs apps and programs well and handles light multitasking with no problem, but we noticed some sluggishness with high-intensity apps when we taxed the system more.

Graphics are good enough for playing video but not great for video games. Given the integrated Intel graphics inside, the 3DMark 06 score of 3804 and a 3DMark 11 score of 419 are no surprise. Stick to the casual games on this machine.

The Series 7 is available in a more powerful configuration (model number DP700A7D). This version offers a 2.5GHz Core i7-3770T processor, 8GB of RAM, and discrete AMD Radeon HD 7850M graphics for the price of $1,700. If you’re drawn to the Series 7 but need something more powerful, it’s worth checking out.

The Samsung Series 7 all-in-one is an attractive machine with some good features that’s hampered by below average performance and a slightly marred display. For consumers who don’t need a powerful computer or an ultra-fancy multimedia hub, the Series 7 could serve them well. However, we really don’t like that the touchscreen interferes with overall display quality.

Right now, the HP Envy 23 is a competitive option at this price, even with the caveats we express in that review. It doesn’t have a touchscreen, and that’s a big deal for many consumers looking at Windows 8. In the end, it all comes back to balance. Are touch and gestures more important, or is performance? If it’s the former, the Series 7 all-in-one is a decent option.