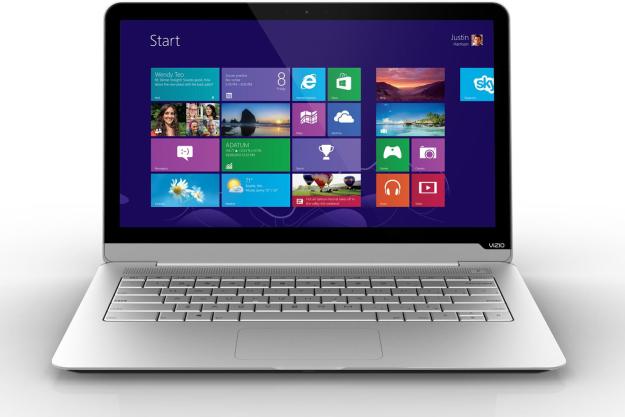 “Like a moth to a flame, Vizio’s CT15T-B0 lured us in with its bright 1080p screen, full-voltage AMD innards, and attractive design. But its hot backside, and sharp edges will have you looking for a more comfortable laptop.”

You likely know Vizio for its HDTVs. As the company is proud to proclaim, it’s the top-selling LCD HDTV brand in the U.S., and has been at or near the top of the LCD market since 2007.

But Vizio’s comparatively new to the PC space, having brought its first laptops and all-in-one PCs to market just about a year ago. Since then, it updated its initial line of laptops to include touch screens, speedy new 802.11ac (Gigabit Wi-Fi) chips, and standard-voltage processors, rather than the low-voltage chips that usually make their way into sub-inch-thick laptops.

With its nice 1080p IPS touchscreen, a silver-metal exterior, and 0.68-inch thickness, the AMD-based 15.6-inch Thin and Light Touch (model CT15T-B0) that Vizio sent us for review looks great. And at 4.84 pounds, it’s reasonably light for a laptop of this size.

At $1,190, the CT15T-B0 model is priced reasonably well, given its high-resolution screen and powerful components (including a 128GB SSD and 8GB of RAM). But if you want the extra raw CPU muscle (and likely somewhat less-powerful graphics) that comes with the Intel-based Core i7 model, the price is considerably steeper, at $1,470.

Let’s see if Vizio’s first year in the PC business has helped it become more than just company known for its TVs.

Vizio hasn’t changed its laptops’ exterior aesthetics since last year’s models, which means you get slim, good looks and generally rigid-feeling construction. But you’ll have to live with limited port selection as well as the same shallow, flat, non-backlit keyboard that we saw on the CT14-A4. Vizio also didn’t change the tapered sides around the keyboard area, which have sharp edges that can dig uncomfortably into your hands or wrists when typing.

Discussing the ports is easy because, well, there aren’t many – especially for a 15-inch laptop. The right edge houses a blue USB 3.0 port and an HDMI connector for plugging in to an external monitor or HDTV. On the left, there’s a second USB 3.0 port and a headphone jack. The power jack is also here.

That’s all the laptop offers for tethered connectivity. There’s no SD card slot, no Ethernet jack, and only two USB ports to plug in adapters for the ports the system lacks. If you opt for a Vizio laptop, you’ll probably want to invest in a travel-friendly USB hub.

Speedy Wi-Fi, but why?

One of the main new features on Vizio’s latest line of laptops and AiOs is the addition of 802.11ac Wi-Fi chips (also known as Gigabit Wi-Fi). Vizio deserves some credit for including cutting-edge tech here, as 802.11ac chips have yet to make their way into most laptops and other consumer devices. But that’s also part of the problem.

We appreciate that Vizio continues to update its laptops with better specs, but no amount of internal rejiggering is going to outshine its laptop’s major design issues…

You’ll need an 802.11ac router to take advantage of the faster Wi-Fi speeds, and they’ve only started to trickle onto the market over the last several months. Theoretically, 802.11ac routers have a max speed of up to three times what’s possible with the 802.11n Wi-Fi chips that are common today. But average home broadband Internet speeds are still hovering below 10Mbps, or less than one percent of the 802.11ac’s maximum achievable speed.

So the new chips in Vizio’s laptops, while fast, won’t make your Internet speeds move any faster, unless you’re rocking some ultra-fast broadband, like Google Fiber.

Still, 802.11ac does operate on a 5GHz frequency, which should lead to less interference and possibly greater range. We’re happy that Vizio included new Wi-Fi chips as a cutting-edge feature for the future. But it’s just not really a major selling point for today.

One of the CT15T-B0’s bright spots (literally) is its 15.6-inch screen. It’s not the best we’ve seen in terms of color reproduction, as it was only able to display 78 percent of the sRGB scale in our testing. But its resolution is a welcome 1080p (1920 x 1080), and its max brightness of 308 nits has only been (barely) bested recently in our testing on the laptop front by Acer’s Aspire R7. The Vizio also has an IPS panel, so there are no major viewing angle issues – a problem that still plagues plenty of mid-range laptops.

Of course, Vizio’s new laptops have 10-point touchscreens. And like pretty much all the touch-enabled laptops we’ve seen since the launch of Windows 8, touch was very responsive in our review unit. There is, though, a raised plastic lip around the edge of the laptop’s lid, which your fingers will likely bump up against when swiping in from the sides of the screen – at least until you get used to it. But the lip keeps the screen from crashing into the keyboard when closed, so it’s there for an important reason.

At close to five inches diagonally, the laptop’s touchpad doesn’t feel cramped, but it does feel like it could be bigger with all the room in the wrist area. It’s nearly flush with the wrist area, which makes swiping in from the sides a pleasant experience. We didn’t have the same issues getting Windows 8 gestures to work as we did with Vizio’s 14-inch model that we looked at last year. We’re hoping that means the company improved its drivers, allowing for a better touchpad experience for everyone who’s purchased a Vizio laptop.

While we found the touchpad fairly enjoyable to use, the same can’t be said for the keyboard. The CT15T-B0’s keyboard suffers from the same issues as all other Vizio laptops. Most of the keys, apart from the up/down arrow keys and the Function row, are fairly large. They’re also very flat and bunched right up on each other, making it difficult for touch typists to orient their fingers when typing. The key travel is shallow, even by Ultrabook standards.

In the past, we’d say the keyboard is okay if you aren’t the type that does a lot of typing. But these days, if you don’t do much typing, you’re better off saving yourself some money and bulk and opting for a tablet instead.

We don’t want to sound overly harsh, but the keyboards on Vizio’s laptops are some of the worst we’ve used as far as feel and travel goes. Whenever the company gets around to overhauling its exterior designs, whipping up a much-improved keyboard should be at the top of its list.

Those looking to tackle demanding tasks or do some gaming with their thin and stylish notebook will no-doubt appreciate the CT15T-B0’s relatively new quad-core A10-4657M processor. But you’ll definitely want to do your gaming or video editing on a desk.

… we break out in a sweat just thinking about how hot the Intel-based model might get.

In our testing, the laptop’s bottom got noticeably warm when handling light tasks like surfing the Web or editing documents. When firing up benchmarks that heavily taxed the CPU or GPU, things definitely got toasty.

Our infrared thermometer measured top temperatures of 108.3 degrees Fahrenheit on the bottom rear of the laptop when maxing out the CPU, and a hard-to-hold 116.9 degrees when heavily pushing the system’s integrated Radeon HD 8670M graphics. Up top, while the wrist area remains reasonably cool, the keyboard can get warm, and the speaker grill above the keys gets nearly as hot as the bottom of the laptop. And, though the CT15T-B0 was quiet when idle, the fan often is audible under heavy workloads, as it labors to dissipate the heat from the 35-watt processor.

The CT15T-B0’s heat issues aren’t easy to dismiss. Under heavy load, it’s one of the hottest laptops we’ve tested in a long time. But at least if you use your PC on a desk, you can avoid handling the hottest parts of the laptop.

Reasonable performance, but at a cost

With its 2.3GHz AMD A10 quad-core processor, the CT15T-B0 held its own in terms of CPU performance, but it really only stacks up well against low-voltage Core i5 and i7 chips that are typically found in Ultrabooks. Those who want the most powerful CPU performance for editing or transcoding video or tacking other CPU-heavy tasks quickly will want to opt for the pricier Intel-based CT15T-B1. If you do so, you’ll double your storage space as well, as that model ships with a 256GB SSD.

But we break out in a sweat just thinking about how hot the Intel-based model might get; its i7-3635QM processor has a max power rating that’s 10-watts higher than the AMD version we’re looking at here, which already approaches 120 degrees under maximum load.

For most users, though, the AMD-based model’s performance should suffice. Our review unit felt very responsive, thanks in part to its 128GB SSD, which also helped the system boot in a speedy eight seconds.

Gamers may appreciate the AMD model’s on-chip Radeon HD 8670M graphics. But don’t expect a huge performance gain over what you’ll get from Intel-based graphics. In 3DMark, we got scores a bit better than what we saw in with the Surface Pro, but a bit lower than what we saw from Toshiba’s Kirabook. Bottom line: You’ll be able to play most games, but at reduced resolution and game settings.

Battery life, as you might expect, given the CT15T-B0’s large screen, hot processor, and thin form factor, isn’t great. We wouldn’t say it’s terrible given those caveats, but we’d like to see more longevity. The CT15T-B0’s lasted 2 hours and 10 minutes in our high-drain Battery Eater test, just a bit longer than Acer’s Aspire R7. And on the less-demanding Peacekeeper battery test, the Vizio lasted about 4 hours and 18 minutes, again just besting Acer’s R7.

The CT15T-B0 has better battery life than the 14-inch Vizio model we looked at late in 2012, but it certainly isn’t impressive, especially given the claims Intel has been making about its just-announced Haswell processors. Those who want better battery life will have to look elsewhere, or wait to see how long Vizio’s laptops last when equipped with brand-new Intel 4th-generation Core processors.

At $1,190, the CT15T-B0 sounds reasonably attractive for a system that’s Ultrabook-thin with capable components, has a 1080p IPS touchscreen, and features good-looking metal design. It also lacks anything in the way of questionably useful, pre-installed software, which we like – a lot. And we’d certainly recommend this model for most users over the much-pricier Intel-based variant, which approaches $1,500.

But as much as we like its specs on paper and its aesthetics on our eyeballs, the CT15T-B0 is difficult to recommend once you actually use it. It gets too hot for comfortable use, unless you’re doing light duties. And if you’re a light-duty person, you should get something with a less power-hungry, heat-generating processor.

The keyboard is, well, flatly bad (and badly flat). It’s better than using a touchscreen keyboard, or the Surface’s Touch Keyboard cover, but it’s worse than the keyboards on competing laptops by no small amount. And the keys aren’t backlit, which should be a standard feature on all laptops this expensive at this point in the game.

We appreciate that Vizio continues to update its laptops with better specs, but no amount of internal rejiggering is going to outshine its laptop’s major design issues. We hope the company recognizes this and will bring a fresh chassis design with new laptops sometime in 2013.

Until then, there are plenty of similarly thin, similarly priced laptops with better keyboards and more ports, that are also comfortable to use and easy to look at. Sony’s Vaio T14 Touch, for example, can be had for about $50 less than the Vizio CT15T-B0 and has similar specs and a Blu-ray drive. And for those who would rather ditch the optical drive for an innovative screen design, there’s also the Acer Aspire R7, which starts at $999.