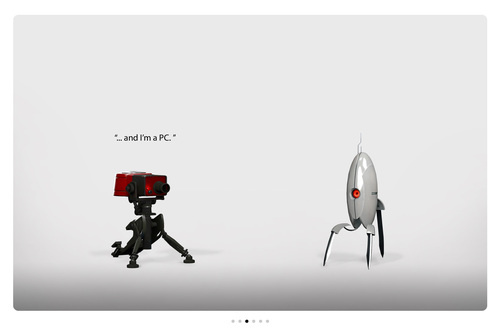 Even the most hopelessly deluded Macheads wouldn’t tell you otherwise: Macs suck for gaming. Despite capable hardware – including a dedicated GPU in every model on the market today – the complete vacuum of recent titles for Apple’s OS X operating system has left Mac owners with a lust for gaming high and dry. But the tide could be turning, as heavyweight developer Valve Software hinted that it might be giving the platform some much needed love in the future.

Valve distributed a series of mock advertisements for Team Fortress 2, Portal and Half-Life 2, all copping Apple’s signature style, hinting that all three titles might soon be making an appearance on OS X. They range from Half-Life’s Alyx Vance hurling a crowbar into a giant head on a screen ala Apple’s 1984 ad, to a Team Fortress 2 character done in the colorized silhouette style of iPod ads.

The argument gets even more compelling taking the timing into consideration. The annual Game Developer’s Conference begins March 9, giving Valve an ample world stage to make an announcement following this week’s teasers. Snooping game enthusiasts also managed to dig OS X elements – like icons and buttons – out of the source code for a recent Steam beta.

All three bits of evidence point to an imminent release of Valve’s most popular titles for Mac. Watch next week’s coverage of the Game Developer’s Conference for the official announcement, and more importantly, to find out when you can finally break out Gordon Freeman’s crowbar on your iMac.

Check out the actual text in the ad below for a subtle dose of Valve’s wry wit – and a virtual guarantee that Steam will arrive for OS X.