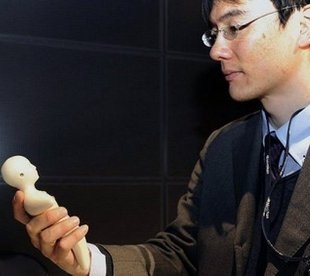 Science is always marching forward, but does it need to carry a human-shaped phone in its pocket? Yesterday, Japanese researchers at Osaka University announced that they have created a human-shaped mobile phone with an outer coating that feels like skin, reports the AFP. The goal: to let you “feel closer” to those you’re talking to on the phone. We wonder, do Japanese men and women often touch faces as they talk to their friends?

“The mobile phone may feel like the person you are talking to,” said the Advanced Telecommunications Research Institute International (ATR) in a press release. It also described the gadget as a “revolutionary telecom medium.”

The current prototype is a bit bigger than a human hand. Shaped like a unisex doll, it has a speaker in its head and a blue/red LED light embedded in its chest, which notifies users when the phone is in use or in standby. Future iterations of the device will have image and voice recognition, so you’re phone will know what you look and sound like. Scientists hope to have a human-phone on the market within the next five years.

DIRTT uses VR to help users design their future space in real time, from any iPhone

Forget foldable: Japanese researchers develop a display you can cut to pieces

Hands-free video phone prototype demoed, makes you look a bit like an android