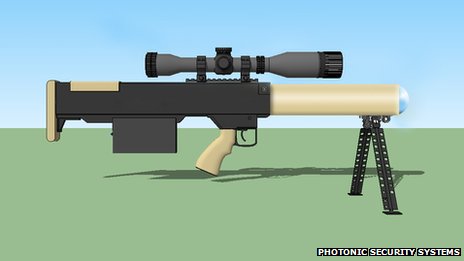 Brit-based rioters might want to think twice before they put their foot through another store window anytime soon, as police there are about to begin trialing a laser gun that leaves those in its path blind – albeit for a short time.

The SMU 100 laser weapon, which was originally designed for use against Somalian pirates, costs £25,000 ($40,000) and is capable of shooting a three-meter wide “wall of light” over a distance of up to 500 meters, causing anyone facing it to briefly lose their sight. If anyone has ever accidentally glanced directly at the sun, they can imagine what the effect might be like.

“The system would give police an intimidating visual deterrent,” said Paul Kerr, managing director of Scottish-based Photonic Security Systems, which makes the weapon. “If you can’t look at something you can’t attack it.”

The SMU 100 is set to be trialed by a British police unit, though precisely which one is not being disclosed. Following the trial, as well as further tests to examine whether there are any long-term health risks, the government will decide if the weapon will be adopted by police forces across the nation.

Several cities around the UK suffered at the hands of rioters and looters over a four-day period back in August, opening up a debate about how to deal with any future occurrences of severe social unrest.

Water cannons have been looked at, but are thought to be too big and cumbersome for many of the country’s narrow city streets. Furthermore, slow-moving water cannons are better suited to dealing with large crowds rather than going after smaller groups dotted about a city, which was the situation with August’s unrest. British cops also have Tasers and CS gas at their disposal, though their limited range renders them useless in many situations.

The possible use of laser weapons will likely worry many in a country where the vast majority of police officers go about their daily duties with a baton down their trousers rather than a gun in their holster.

Online school has a massive blind spot, and it’s hurting young learners the most

U.K. military is getting serious about lasers and other energy weapons