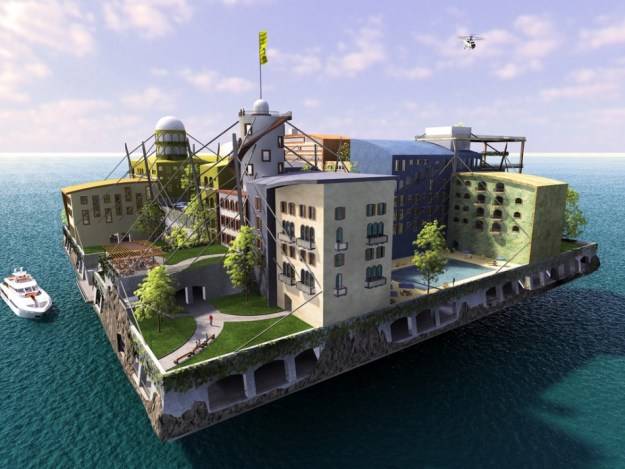 According to a Details magazine profile, Thiel is looking for the new frontier. He believes he has found that frontier in the Seasteading Institute, an initiative headed by former Google engineer Patri Friedman in 2008. The idea is to establish (manufacture) small city-states built on platforms similar to oil-rigs which would be stationed in international waters; there they would be autonomous blank-slates, ready to be inscribed with fresh governing ideas.

“The ultimate goal,” Friedman says, “is to open a frontier for experimenting with new ideas for government.”’

Details points out, with Thiel and Friedman both being Libertarians, the project is an alternative to the indifference their party has faced in polls. With Seasteading they would have their chance to implement policies in a sort of “floating petri dish” filled with no minimum wage, looser building codes, no welfare and less restrictions on weapons.

Thiel posited that one possible model for government be based on a corporation which ‘starts a country as a business’; he calls it Appletopia. It would be tantamount to a benevolent dictatorship where “citizenship is a free agency”. Thiel and his partners envision a sort of cartel of governments forcing a competition between governments in desirability to attract the choicest citizens onto their barge.

Seasteading’s Friedman believes that the city-states will start off small but aims to have millions of residents by the year 2050. The prototype plan is a 12,000-ton structure which will be able to house 270 residents and have the ability to interlock with similar structures. The project aims to take off from the coast of San Francisco next year, and within 7 years be recognized by the United Nations.

Walmart just released a ton of amazing drone deals
Apple iPhone 13 buying guide: Release date, price, specs — everything we know
Three things the Microsoft Surface Duo 2 needs to succeed
Why are so few people actually using 5G in the U.S.? Here’s what the experts say
5G-enabled billboard in Times Square briefly brings interactive game to masses
Sustainable with Google 2021: Nest Renew, traffic light efficiency, and more
The 20 most outrageous and fantastic James Bond gadgets of all time
AirPods 3 could finally debut at Apple’s Unleashed event on October 18
Scientists think the next big solar storm could create an ‘internet apocalypse’
Need a last-minute Halloween costume? Check out these 3D-printable getups
Siduri Wines blends wine and tech in the ultimate sweepstakes experience
The funny formula: Why machine-generated humor is the holy grail of A.I.
How far away are we from mainstream 5G home internet?