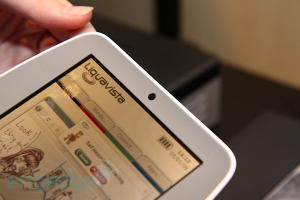 The Samsung Group obviously has a growing interest in small, energy efficient displays. With devices like the Galaxy S smartphone and the Galaxy Tab tablet posting strong sales, the company is well positioned in several mobile markets and has the position to leverage such cutting edge technology.

On Thursday, Samsung announced that it would be acquiring a Netherlands firm named Liquavista. The acquisition seems like primarily an intellectual property purchase. Liquavista, based out of Eindhoven, is a spinoff of Phillips Research Labs and has developed a new kind of electrowetting display technology, which could serve as a replacement to LCD screens.

Electrowetting offers lower power and higher transmittance than LCD displays. One of the most common production electrowetting technologies on the market today is E Ink, the displays used in the Amazon Kindle and their ilk.

Researchers have had difficulty, though, applying electrowetting to color screens. But Liquavista seems to have the problem solved. It claims to have created a color display that uses 10 percent of the power of current LCD panels, while doubling the transmittance (like LCD screens, electrowetting displays require backlighting or reflective lighting; transmittance measures how much light makes it through the colorful layer — hence how bright and colorful the viewed light will be).

In its press release, Samsung writes that the technology has “applications in e-readers, mobile phones, media players and other mobile devices.”

Response times has always been a problem for electrowetting displays, making them impractical for active tasks, like showing a graphical user interface (GUI) or a game scene. However, Samsung claims Liquavista has improved response times by 70 percent. E Ink response times are roughly 250 ms, so in theory, this means a response time of 75 ms, or a display capable of a ~13 Hz refresh rate. While this may not be fast enough for gaming, it may be fast enough for a GUI, or web browsing.

Samsung indicates that it will work with its new Dutch team to develop new technologies. It says it anticipates the company’s electrowetting display technology to mature into “transparent, transmissive and transflective displays”, with refresh rates on par with today’s low-end LCD screens (the likely target being 60 Hz).

It also mentions that it should be able to merely modify its existing LCD display production lines to successfully produce displays leveraging Liquavista’s electrowetting tech.

Our dialogue with Samsung was forwarded to the appropriate parties. Apparently the purchase was 100 percent cash, but the purchase price was not revealed yet. Nor would Samsung share the exact response time of Liquavista’s displays in milliseconds, commenting, “We have been testing the technology and are still in a development stage, so we can’t reveal such details at this point.”

The Samsung spokesperson did offer some insight into how the new unit will be operated. It will stay in the Netherlands, but will join the global Samsung LCD R&D Center unit.

If you’re hoping to see a Samsung-powered colored e-book reader in time for the next holiday season, don’t get your hopes up. Samsung’s representative tells us, “We are still in the process of developing the EWD technology to further advanced commercialization. Timing to reach the market remains flexible.”