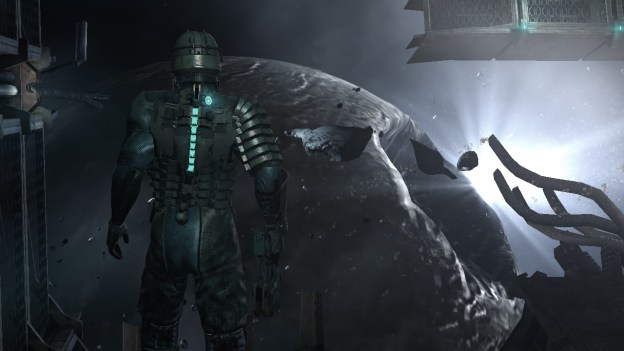 The Dead Space franchise has quickly risen through the catalog of EA games to become one of the publisher’s most important properties. Along with the two full games, the series has spawned an on-rails shooter, a puzzle game, two animated films a novel and two comic books—not to mention the odd shirt, bobble head, action figures, and other odd piece of merchandise.

Earlier this year a restructuring of executives at EA threatened the franchise, and rumors began to float that Dead Space 3 had been cancelled. Dead Space 2 was a commercial success with well over 2 million copies sold, but the higher-ups were reportedly underwhelmed with the figures and expected more of the property.

Those rumors were soon swallowed and eaten by a new set of rumors insisting that Dead Space 3 was not only still in development, but it was fairly far along in the process, enough so that details of the game have begun to leak. Although the title still has not officially been confirmed, the game will likely be set on an ice planet and the darkness of space will be replaced by the blinding whiteness of a blizzard on an ice planet named Tau Volantis, the sight of yet another monster-spawning Marker. Further leaks suggest that the protagonist Isaac Clarke will be battling his own scarred psyche, and that this will be the conclusion of his story.

According to an insider that spoke with Kotaku, EA wants to dramatically expand the Dead Space universe with a series of new games, all in different genres.

The report claims that EA is pushing for a first-person shooter, a flight-sim, and an adventure game that would play in a similar fashion to the Uncharted games, and possibly more. If that is true then you can likely expect several new Dead Space comics, animated movies, novels and more.

A Dead Space movie has also been rumored–just like every major video game property is rumored to be in development at one studio or other. This one seems to have at least some steam behind it though, and D.J. Caruso (I Am Number Four, Eagle Eye) is supposedly still developing the property. The odds of it actually getting made are still very low, but if EA is pushing to expand the Dead Space universe, a movie could help to that end. Assuming it isn’t a terrible movie, of course.

All of this is still unconfirmed though, including Dead Space 3 which EA has yet to confirm, even though it seems both likely and imminent. EA may be waiting to see the results of Dead Space 3 before moving ahead with any franchise plans, but it sounds like the property may soon be receiving massive exposure.