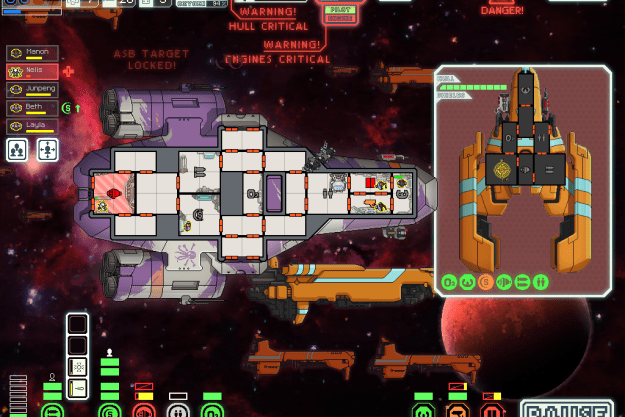 “FTL: Faster Than Light - Advanced Edition takes a great game and makes it better, with a load of new content giving you more reasons to charge fearlessly toward near-certain death.”

Space spiders are the worst. You try to do the right thing by saving a besieged space station, and all you get for your efforts is a dead crew member. Nothing changes that. Not pitch-perfect iPad touch controls, not an assortment of new features. FTL: Faster Than Light – Advanced Edition still sports space spiders, and they still suck. A lot.

FTL feels like it was always meant to rely on touch controls.

Subset Games’ 2012 indie darling returns in bigger and badder form with the new Advanced Edition. On top of all the new stuff – which we’ll get to momentarily – there’s also the game’s first-time appearance as a non-PC game, with an iPad release. Really, we’ve got two separate considerations here. There’s the game itself, which receives the new content on Mac, Linux, and Windows as a free update, and the Advanced-enhanced iPad version, which complements the newly updated game with exceptionally well-executed touch-based controls.

Let’s start from the beginning. What is FTL? The game gives you God-like control over a Federation spaceship that’s charged with ferrying critical information across multiple sectors of space while the evil rebel fleet gives pursuit. The simple-yet-stylish graphics and top-down perspective suggest more of a retro vibe, but there’s a whole lot of depth here. The only truly set quantity is the ship that you start with; you can unlock multiple ships and variants over time, but you’ve got to stick to the one you start your game with.

That’s OK, since you’ll be starting plenty of new games. Death comes frequently (and often without warning) in FTL as you travel from system to system, and sector to sector. You play by calling up the star map once your FTL drive is charged and choosing an adjacent system to travel to. Each new location you visit relates the next chapter in your own little space adventure. What you find as you move from system to system is completely randomized. Sometimes it’s an enemy ship, or a merchant, or a pirate hiding in an asteroid field. Sometimes it’s those awful space spiders.

The game mixes strategy, skill progression, and exploration into a satisfying stew. Combat is a tricky balancing act of juggling power needs across your ship, fixing damage, and zeroing your attacks in on specific enemy systems. Exploration is a total gamble. Distress beacons bring rewards or danger … usually both. Traveling through nebulae slows the pursuing fleet down, but at great risk to your own ship. And upgrades are always a choice. You never have enough resources to buy all the nice things. Do you want cloaking abilities or a larger crew? More powerful weapons? Improved shields? Is your ship’s reactor upgraded enough to even charge these things?

Advanced Edition takes that infinitely replayable framework and layers loads more content on top of it. It adds new ship systems, like Hacking (which provides intel and disrupts enemy systems), Cloning (you can recover dead crew members), and Mind Control (turn enemy crew against itself!). A new alien race, and their ships for you to unlock. Visual tweaks that communicate information more clearly. And other, smaller additions, like more ship variants, new gear, and an absolutely brutal Hard mode.

None of these elements change the game in a fundamental way, they just give you more to do with it. You already had plenty of options to weigh when deciding how to spend your collected scrap (FTL‘s currency) in a store, but now you’ve got that many more. None of the new ship systems throw the difficulty out of balance. All of them give you an edge if used correctly, but that was always the case in this game. That said, Subset wisely included a main menu option for turning off Advanced Edition content, in a nod to any purists.

All of these elements stack up in a great way for all versions of the game, but it’s the iPad release (iPad 2 or higher) that stands out. FTL feels like it was always meant to rely on touch controls. The iOS version is more than just “the game you know, but now you can touch it too.” Subset put real thought into delivering controls that acknowledge the benefits and weaknesses of touchscreen play versus a mouse and keyboard. Tap a crew member you want to move or a weapon system you want to target, and the game automatically pauses. Swipe your finger up or down on a ship’s system and you adjust the power distribution. These are smart enhancements that really improve the quality of the portable experience.

FTL: Faster Than Light was an outstanding game all the way back in 2012, and the Advanced Edition content doesn’t screw that up at all. This is still one of the finest games to be released in recent years, provided you’re the sort of gamer that appreciates the frequent restarts that go hand-in-hand with any roguelike experience. Subset Games didn’t reinvent anything here; it simply went back and looked at what kicked ass in its original effort, then piled more ass-kickings on top of it.

This game was reviewed on a current-gen iPad Mini using a code provided by Subset Games.

[This review was updated to correct a small factual error. Thanks to commenter RKade8583 for pointing it out.]

Topics
Video-editing app LumaFusion to get a Galaxy Tab S8 launch
Your 2021 Samsung TV may get Xbox Game Pass and more game apps next week
Best graphics cards 2022: finding the best GPU for gaming
The best games for Steam Deck
The best Apple Arcade games you should play right now
The best Call of Duty: Warzone 2.0 weapons for Season 1
How to get all starters in Pokémon Scarlet and Violet
Black Friday: This MSI gaming laptop just dropped under $500
Evil West perks guide: best perks to buy first
How to evolve Pawmo into Pawmot in Pokémon Scarlet and Violet
Live now: Save $50 on the Microsoft Xbox Series S Digital Edition deal
‘Wordle’ today, November 24: Answer, hints, and help for word of the day (#523)
7 video game characters who deserve a Macy’s Thanksgiving Day Parade balloon