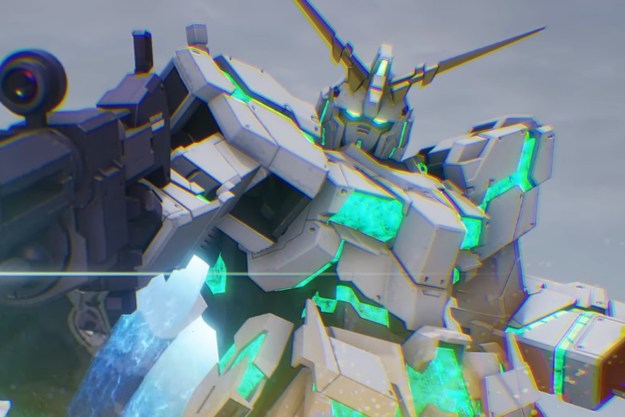 “Gundam Evolution is a hero shooter that gives Gundam fans and new players a full product despite being free-to-play, though it's not without high item prices and tech quirks.”

It’s wild to think there would ever be a world where a game based on the Gundam franchise is seen as a true competitor to the hero shooter throne that Overwatch sat on since it released in 2016. The series is a juggernaut when it comes to anime and model kits, but it has never delved into the mainstream gaming scene beyond a few Dynasty Warriors titles. However, this year saw the release of Gundam Evolution, a Gundam game that looked to appeal to more than just fans — something it certainly achieves. It’s a bit of good timing, as the release is already overshadowing some of the upcoming Overwatch 2‘s missteps. But that’s not to say Gundam doesn’t come with a few mistakes of its own.

Gundam Evolution delivers exactly what its title implies. It’s an evolution, not just for the Gundam franchise, but for the team hero shooter genre itself. The options and unique flavor it presents aren’t limited to just putting players in mechs (called units and mobile suits in the Gundam world) and throwing them into a game of Overwatch. It goes above and beyond to make the experience genuinely appeal to more than just Gundam fans. That doesn’t mean it completely ignores the ingredients provided by Overwatch, but it puts its own spices in the stew on top of those

These mechs aren’t just for show

Gundam Evolution may look like a basic Overwatch clone with mechs, but there’s much more to it than that. The shooter has its own unique flavor that neatly fits the hero shooter genre into the Gundam framework to invent something that functions as more than anime fan service. Of course, there are clear similarities to Overwatch, with all the basics of the game and even straight-up move-set copies of some of its characters appearing here. Like Overwatch and the rest of the hero shooter genre, Gundam Evolution gives players access to different heroes called mobile suit units. Each of these 17 units has its own special abilities and, in the case of Gundam Evolution, secondary jobs.

I say secondary job because Gundam Evolution was created with a key gameplay philosophy: Every hero can fight. When I used Methuss, I found that the unit could do much more than heal. This mobile suit has impressive mobility (one ability lets it briefly transform into a flying ship), packs superb firepower with proper aim, and is excellent at reviving at a distance with its healing ability. Each unit has that level of versatility, making more characters feel like viable options at present.

There’s even a Splatoon-like aspect to the gunplay thanks to jet boosters, which allow units to dash forward and hover. While it’s essential to get kills to further secure a match objective, part of the tension comes from players’ ability to fly into a point with a well-placed boost, land a few key shots, and safely zip out. The dash isn’t infinite, so players need to keep an eye on their meters to ensure they’re using the tool at the most opportune moment, just like abilities.

In such a high-octane game, these changes to the hero shooter formula play a key role in making a match feel as fluid as possible, while opening the door for loads of strategy. For instance, in plenty of games using Methuss, I’d run in to heal an ally. Right after that, I could get some shots in and protect them while they ran to safety and then use my ship ability to flee myself. These options aren’t widely available in other games of the genre that’s what sets Gundam Evolution apart.

This individuality doesn’t make the game perfect though. The speed and movement tacked on top of its “jank” can make for a frustrating entry phase for first-time players and even quick learners. During my first days of playing, I ran into instances of wonky hitboxes and weird buffers on different moves and dashes at times. One constant issue I’ve hit is not being able to tell when attacks hit properly. It’s one of those games where if you can work past or learn to work with the issues you’ll find tons of enjoyment, but it’s definitely not for everyone due to these issues.

The stages could use some work

One area where it’s clear that Gundam could use a bit of upgrading is the stage variety. I don’t entirely fault the team for the current stage selection, which features some repetitive design. Gundam is a series where tons of battles take place on desert-like planets, dark space stations, and machinery-filled bases. But when I look at both the locales in the Gundam anime series and diverse stages in other hero shooters, it feels like there’s still space for the live service game to expand in later updates.

It’s hard to navigate when I’m staring at the same metal and steel textures around every corner.

There are Gundam series that take the fights to cities, water-based areas, and beyond, but Evolution lacks that same biome-trotting feel. While playing the initial betas, I found myself getting lost no matter how many times I played through certain battlefields, as so many pathways and lanes looked similar to one another. It’s hard to navigate when I’m staring at the same metal and steel textures around every corner.

That’s not to say these stages are poorly designed. Each has great choke points and item placements, which helped me build an eventual mental map of stages. Sooner rather than later, I felt right at home. The game’s three different modes: Point Capture, Domination, and Destruction, can change the feel of maps, adding some extra twists to the mix.

In Point Capture, one team captures two different set objective points while the other defends. Domination sees both teams constantly traversing the entire map while attempting to capture multiple points. Finally, in Destruction, one team attempts to arm an explosive and protect it until it goes off while the other does the opposite. Each mode uses the maps differently enough to make them feel new. However, the 6v6 player count in each mode (that’s a higher player count than Overwatch and its sequel) may hit players differently. For some, this larger spread may end up feeling a bit unbalanced for the objectives and the maps they’re played on.

Since this is a game that’ll likely be supported for a while, it’s entirely possible that Bandai Namco could bring in some variation in new seasons. Until then, I’ll be praying I’ll be able to fly the blue skies hanging over a city instead of getting lost on a non-distinct space base.

I was shocked when I saw the number of units available for free when I started up the full version of Gundam Evolution. As soon as you open the game, you have access to all 12 of the units that were available in the game’s beta free of charge. This wide variety of mobile suits allows tons of experimentation and grants access to a complete experience without forcing players to drop a cent.

It won’t empty your pockets or beg you to spend your entire life playing to get a good time out of it, but the premiums can be an easy turnoff …

There are five extra units that players can unlock either with an in-game unlockable currency called Capital or through actual money, which can be traded for EVO coins. The unlockable currency is attained by completing challenges and leveling up to fill out the free battle pass tiers. There are also paid battle pass tiers that reward players with the currency granted by paying actual money.

While the free-to-play roster has enough variation to deliver a full experience, those wanting the extra bells and whistles of the additional five units and skins will have to pay some extra. For example, those looking to play completely free and unlock everyone else through the free battle pass will only accumulate enough unpaid currency to get one character to unlock per season.

The actual monetary purchases are no joke either. Each premium character comes at a price of $10, meaning it’s $50 for the set. The skins add on an extra premium as well. A pack of four simple reskins came at $80 (and what’s worse is that they aren’t exactly the prettiest cosmetics). There’s at least solace in the fact that these skins and extra characters aren’t needed to enjoy the game. One can easily jump in, ignore all this, and play the game without paying a penny. But if you want to play the full game, either be ready for a slow and steady grind or pay up.

Gundam Evolution brings enough unique twists to make it a true contender in the team hero shooter genre. The game switches things up enough that I’m confident it could attract players completely illiterate in Gundam series. For fans, though, it brings a wealth of exciting references to dig into like special VIP outros. It won’t empty your pockets or beg you to spend your entire life playing to get a good time out of it, but the premiums can be an easy turnoff for those that want a wider experience. The jank of the game may also turn away potential suitors. But thanks to the promise of future updates and being free-to-play, Gundam Evolution might have the high ground in its war against Overwatch 2.

Gundam Evolution was reviewed on PC.

How to pre-order Dead Island 2: retailers, editions, and bonuses
RoboCop: Rogue City release date, trailers, gameplay, and more
The best free FPS games you can play right now
Is Overwatch 2 cross-platform?
‘Wordle’ today, December 8: Answer, hints, and help for word of the day (#537)
The best Nintendo Switch exclusives of 2022: 9 standouts from the console’s banner year
The best live service games of 2022: 10 ongoing games we couldn’t stop playing
Save $59 on the Xbox Series S, with delivery by December 24
Marvel’s Midnight Suns hero guide: every hero explained and ranked
How to order the PS5 (with disc drive) for delivery by December 24
The best places to land in Fortnite for Chapter 4
The Game Awards 2022: how to watch and what to expect
How to win a free Steam Deck during The Game Awards 2022