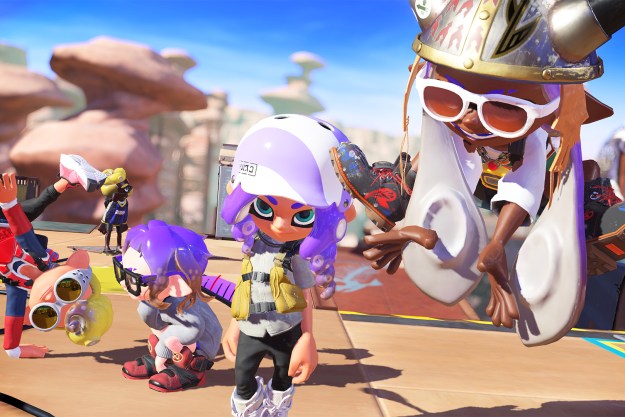 “Splatoon 3 delivers a breed of content-rich multiplayer fun that's refreshing to see in the age of shaky free-to-play promises.”

In a just world, Splatoon 3 would be the biggest multiplayer game of the year. That’s a level of success it would certainly deserve, as Nintendo has created the best iteration of its wildly inventive ink-shooter series yet. It does that without microtransactions, compulsory log-in bonuses, or pop culture references. Not only that, but it’s been packaged into the kind of content-loaded release that feels all but extinct in today’s competitive multiplayer landscape.

That’s largely due to free-to-play, a business model that gives developers a lot of slack upfront. Free games like Rumbleverse or MultiVersus don’t need to be fully formed on day one — hell, they don’t need to be good at all. They just need to be fun enough to hook players who were curious or bored enough to download them. A full-priced multiplayer game doesn’t have the same luxury. It needs to be a full experience at launch, not just one fun mode if it’s going to convince players to buy in. Splatoon 3’s best trait is that it does not take the challenge lightly.

If you find the current multiplayer landscape nauseating, Splatoon 3 may be the relief you need. It’s not just that it improves on every aspect of the series with much-needed quality of life tweaks and creative new modes. It’s that it cares about how players spend their time between online matches — something that I wish other games would take note of.

Whereas Splatoon 2 felt like a deluxe port of the series’ Wii U debut, Splatoon 3 is a true sequel. There’s less of a feeling that Nintendo is tinkering with a new invention on the fly and working out the kinks as it goes along. Instead, it feels like going from an early access release to a 1.0 launch. This is one of the most confident, full-bodied first-party Switch releases we’ve seen in the console’s lifespan.

The foundation hasn’t changed one bit, but it doesn’t need to. It’s still the same kid-friendly third-person shooter that replaces bullets with ink. Its standard online matches play out like a competitive coloring book, as kids/squids paint the battlefield with their team’s color. As a multiplayer experience, Splatoon’s signature Turf War mode is still second to none. It remains a genius concept that makes it easy for players of all ages to feel like they’re helping the team regardless of skill level. When the test servers set up for the review period went down, I was genuinely sad I’d have to wait a week longer to play more.

Some of its most important changes are simply no-brainer decisions that better set the game up for success. For instance, friends who’ve partied up with one another no longer get shuffled into opposing teams at random (a bizarre Splatoon 2 quirk that still boggles the mind to this day). Though for all its improvements, the team-based game still stubbornly refuses to include an in-game voice chat option, something that feels even more frustrating this time around due to the other positive quality of life bumps.

While that disappoints, little else does when it comes to basic online play. Maps are plentiful at launch, bringing a strong selection of old favorites and new standouts. Connectivity was stable during my tests with none of the lag or stutter you get from something like a Mario sports game. Ranked modes can now be played in a five-game series, which will give competitive players a high-stakes challenge to work towards. And of course, Splatfests return with some exciting new twists that already revved up the series’ social power during a quick weekend demo earlier this summer.

Every little change adds up to create a core online experience that hasn’t left me anxious about what’s next.

There’s also a lot to love when it comes to the game’s new weapons and abilities too. Tools like the Splatana, a windshield wiper that can be wielded like a sword, have already changed the way I play entirely. During a few days of online matches, I found myself switching my weapon way more often (something that can now thankfully be done between matches), as I was simply having a blast experimenting with all the creative new ways I can now unleash an inkstorm on my opponents. I’m especially fond of one super ability that lets me summon an oversized hammer that splats my opponents with slapstick charm.

For those who have only ever played Splatoon casually, these changes may not seem especially world-changing. However, every little change adds up to create a core online experience that hasn’t left me anxious about what’s next. That’s something I couldn’t say for Halo Infinite, MultiVersus, or any multiplayer hit that’s dropped in the past year.

The competitive multiplayer is only one delicious morsel in the calamari platter this time around. Splatoon 3 goes to impressive lengths to create a game that could be enjoyed by a solo player who just digs the franchise’s fresh vibes. That starts with its single-player campaign, which is longer and more in-depth than what’s offered in both previous Splatoon games combined. It features over 10 hours of level-based challenges that tutorialize weapons and abilities while providing some genuine challenges.

It’s heartening to see Nintendo transform Splatoon into a convincing single-player experience, rather than treating it as a quick aside. There’s still some room for improvement, though. The campaign places a much larger emphasis on story, as the world is built out with some delightfully weird lore. However, that’s rarely delivered in levels themselves, which are mostly vague obstacle courses that happen to unlock crucial text logs. There’s a great flash of what could be late in the campaign as the story weaves into level design, but it feels like we’re still one game away from Nintendo nailing what a Splatoon campaign looks like.

The game’s Tableturf Battle mode is similarly one step away from perfection, though I love the groundwork that it lays. Here, Turf War is translated into an addictive deck-building minigame where competing players try to ink the most spaces on a grid using cards. While I’ve spent hours mastering its nuances and crafting decks out of its jigsaw puzzle-like cards, there’s not necessarily a strong reason to keep me hooked. It’s a bit of an island in the main game, somewhat disconnected from the rest of the game. There’s a loose sense of progression with a ranking system and NPC challengers to unlock, but I wish there were some clear cosmetics or weapons exclusive to the mode that would better incentivize me to dig in. The fact that it can’t be played live against friends is a misstep too, squandering the minigame’s excellent competitive potential

I love both the campaign and Tableturf Battle, to be clear. Each is fun in its own right and not just fluff to pad out the online mode. They’re just emblematic of a common Splatoon issue where it often feels like the best implementation of great ideas is always one game away. We know that when the developers can nail something down, it can be incredibly special. See: Salmon Run.

Nothing feels like an afterthought developed to arbitrarily create value.

The four-player PVE mode introduced in Splatoon 2 returns here as the best version of itself. Previously, it was a surprisingly fun wave defense mode held back by being a timed event that players had to clock in for. That restriction is gone and now players can play it at any time, which is a welcome change that makes it feel more fundamental to the ecosystem. While the basic idea remains unchanged — splat waves of undersea enemies, grab the eggs they drop, dunk as many as you can before time runs out — I’m having an absolute blast this time around. That’s thanks to its new kaiju-like bosses, which can spawn after the final round and trigger a chaotic last stand. It’s a small twist that makes the mode feel more unpredictable and challenging, adding a perfect cherry on top of a mode that just needed one more wipe to shine.

Even if some of the new content leaves room for improvement, I’m impressed by the high quality present in each of Splatoon 3’s various tentacles. Nothing feels like an afterthought developed to arbitrarily create value. I’m convinced someone could buy this game, not play a second of Turf War, and still come out feeling like they got their money’s worth.

Splatoon 3 comes at the perfect time for me. In recent months, I’ve found myself more and more disillusioned with multiplayer games. It was triggered by MultiVersus, a game that puts little effort into the experience around its IP-filled fights. When I boot up the game, I’m thrown into an assortment of menus from which I jump into a playlist. When a match ends, I’m quickly shuttled back out to more menus that show a bunch of progress bars rising, enticing me to keep playing. I’m one click away from a shop at all times and feel like the fighting was designed as a way to justify cosmetics and a battle pass.

Splatoon 3 is a game that’s easy to take for granted.

Coming off of that experience, Splatoon 3 is wonderfully refreshing. It goes above and beyond to make sure that players are enjoying their stay in Inkopolis every second the game is booted up. Rather than shuffling players into nondescript menus, it places them in a colorful hub that puts every mode in some sort of narrative context. Online battles are triggered in the reception area of a massive building that includes an area to test out weapons, a food vendor to give them perks, and a gachapon machine that pays out random rewards for coins. Tableturf Battle, on the other hand, is tucked away in a corner of the hub, with a fish running it like a seedy back alley secret. There’s a sense that everything is part of a thriving, interconnected world.

When I’m playing Splatoon 3, I’m not just logging in to knock out a few rounds of Turf War; I’m living out a full day in my squid life. I clock into my day job at Grizzco to play some Salmon Run. Then I window shop at all the vendors, looking for a way to improve my fresh fit. I pass by the Tableturf Battle stall while I’m walking around town and think “Yeah sure, I’ve got time for a round before I head to the lobby.” Rather than chewing through something like the campaign all at once, Splatoon 3 is best enjoyed when fitting all of its pieces into a little routine and picking away at them over time. Sorry Mark Zuckerberg, but Inkopolis is the only digital space I actually want to live in.

Splatoon 3 is a game that’s easy to take for granted. It’ll be tempting to write it off as another fun multiplayer game in a crowded sea — and one that costs $60 more than some perfectly playable alternatives. But what the Switch exclusive does here should be the norm, not the exception. It’s a fully formed and carefully constructed game out the gate, rather than a good proof of concept that’ll live and die by the developer’s ability to keep up. It doesn’t build out its world after the fact through supplementary YouTube videos and it doesn’t need to pepper in references to other beloved media to manufacture entertainment. Everything you need to enjoy the experience is there on day one, not hiding in a development roadmap.

It’s a rare specimen in the multiplayer world — one that even Nintendo itself has struggled to produce this year. Until the day content-rich games like this are driven to extinction, I’ll be savoring every moment I get to spend chilling in the streets of Inkopolis.

Splatoon 3 was tested on a Nintendo Switch OLED in handheld mode and on a TCL 6-Series R635 when docked.