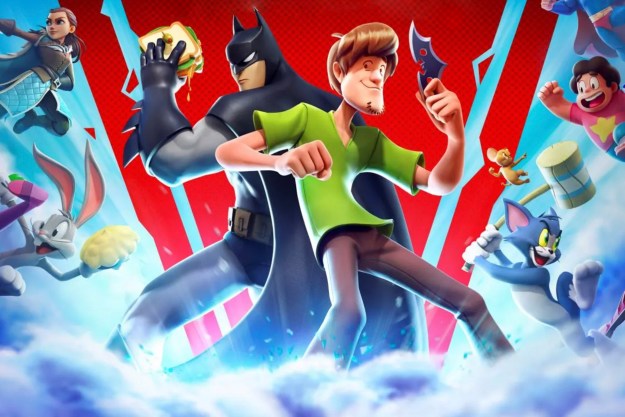 “MultiVersus feels like a corporate product, but Player First Games gets the most out of its ridiculous premise.”

MultiVersus is the new hotness in the fighting game scene since its free-to-play open beta launch on July 26. A giant crossover game for Warner Bros. properties, the platform fighter features a wide range of WB characters, from the snarky rabbit Bugs Bunny to the deadly assassin Arya Stark to the Space Jam: A New Legacy version of real-life basketball player LeBron James.

Yes, that’s an actual sentence that applies to a new video game in 2022.

MultiVersus can feel like a mandated corporate product in many ways with its plain UI, the plethora of microtransactions, and the vast amount of included IP. Thankfully, the developers at Player First Games still crafted a fighting game that’s cooperatively fun at its core, with a take on the platform genre that is wholly unique. If you can get past the more clinical elements of MultiVersus, you’ll find one of the most enjoyable new fighting games for casual players since Super Smash Bros. Ultimate.

MultiVersus is clearly — very clearly –inspired by the Super Smash Bros. series. It’s a crossover platform fighter where movement and platforming are just as important as fighting. That said, it stands on its own with some unique mechanics and a different overall game feel. While many Smash clones try to directly copy the movement of Super Smash Bros. Melee, MultiVersus is more concerned with creating a diverse roster with some mechanics not seen often in other fighting games.

MultiVersus’ characters all have wildly different mechanics and are split into different classes: Brawler, Mage, Assassin, Support, and Tank. Brawlers can deal a lot of damage, Tanks can take a lot of hits, Mages use technical ranged attacks, Support characters focus on buffs and debuff in co-op play, and Assassins are fast glass cannons that can deal a lot of damage but can’t always take it. This unique RPG layer makes MultiVersus stand out in a way that has nothing to do with its roster of famous characters.

Still, each character’s move set is full of references and mechanics that make those characters fit in a platform fighter setup. Many of Tom & Jerry’s attacks come from the cat trying to catch the mouse. LeBron James is constantly throwing his ball and dunking on his opponents. The Iron Giant is a towering character that’s tougher to knock back than others in the MultiVersus lineup. There are so many unique mechanics at play that the game needs a terminology glossary. While that’s a bit daunting, learning and discovering the ins and outs of each character on the roster over time is also fun.

There are still some homages to the Super Smash Bros. series, and they show up in interesting places. I would not have guessed that Arya Stark would have Kirby’s copying ability or that Garnet would have a variation of Snake’s rocket. Still, these references end at the basic premise and some cheeky nods, which is why MultiVersus can maintain its unique identity.

I can see every character being quite fun to use no matter the mode.

MultiVersus also stands out because of its focus on cooperative play. Player First Games stress that 2v2 is the best way to play the game, and all the characters feel like they are built for that mode. Some characters can buff their allies’ attacks or prevent them from being launched on the next hit, while others, like the brand new character Reindog, can tether to their partner and drag them back to the stage if they are knocked offscreen.

With multiple air dodges, jumps, and special abilities, MultiVersus is intense in the air and on the ground. Some characters, specifically in the support and mage classes, feel harder to use in 1v1 or free-for-all settings against brawler that can quickly KO them, but in the hands of the right player, I can see every character being quite fun to use no matter the mode.

Because MultiVersus isn’t trying to live in Super Smash Bros. Melee or Ultimate’s shadow, it stands on its own as a solid platform fighter without the need for comparison. This game is more than just its fighting, though, and that’s where some problems start to arise.

MultiVersus is a free-to-play fighting game across all platforms. While you need a WB Games account, anyone can download it and play with the two bi-weekly free characters until they earn enough in-game currency or spend enough real money to acquire the other characters. Part of the platform fighter’s appeal is that it’s more digestible for casual players than a hardcore fighting game like Guilty Gear Strive, so this approach is a wise decision for MultiVersus overall. It isn’t a flawless one, though.

While MultiVersus’ characters and move sets are flashy and full of inspired ideas, the UI is much more standard and drab, with lists and images in squares and rectangles without much flair. Other games, like Destiny 2 and Super Smash Bros. Ultimate, go to great lengths to make the overall visual presentation memorable and possibly a space that feels lived in. Currently, MultiVersus does none of that, as the menus must be presented in an easily digestible way so people can get to the Battle Pass and other purchasing options that will make WB Games money.

The default UI in matches is also quite crowded, as player names, status effects, and damage counter jumble together underneath each character. MultiVersus may feel distinct from a gameplay standpoint, but its general packaging needs more work. Thankfully, it is possible to customize the UI to put most of the information on the top or bottom of the screen, so it’s less visually busy.

Because of its free-to-play setup, progression also plays a big part in MultiVersus. Players level up their accounts and characters individually, unlocking currencies, cosmetic options, and perks along the way. Players can also purchase a Battle Pass and progress through it by completing in-match challenges, like Halo Infinite or Pokemon Unite. If you want prettier banners and badges, new announcers, or alternate costumes, you’ll have to pay for the Battle Pass or individual items, which could quickly get pricey.

One place I’m thankful microtransactions don’t reach is the perk system, where players can level up and earn perks that give them slight buffs, like an extra jump or launching enemies a bit further when equipped. Still, I’m not a fan of that system because it makes choosing a new, unperked character a tougher experience, as those small buffs can give you the edge in battle.

WB Games provided Digital Trends with access to the MultiVersus Founder’s Pack – Premium Edition, so we can’t quite speak to the true free-to-play experience. That said, I surmise that you can earn enough currency to permanently buy a character (2,000) by the end of the first day or two of playing, and that’s on top of getting Wonder Woman for completing the tutorial and the rotating free characters. Like most popular free-to-play games, MulitVersus is full of cosmetic and grind-minimizing microtransactions.

Thankfully, the base game is fun enough that anyone can play a couple of matches with the available characters and enjoy it. If you plan on sticking around, you’ll probably want to drop some cash on the game, so it doesn’t become a frustrating experience.

MultiVersus may feel inspired and distinct from a gameplay standpoint, but its packaging feels clinical. That’s a shame because MultiVersus’ visuals are pleasant to look at and can put characters like Bugs Bunny and Arya Stark in the same setting without looking too weird. The soundtrack is full of superb tracks too, and I’d like to see more licensed music from the individual properties. This is a game that shouldn’t work, but it does.

While the game’s general aesthetic isn’t very captivating outside of the characters included, I still enjoyed every match of MultiVersus that I played, even when I played cooperatively with random teammates and lost. With full cross-play and rollback netcode, it’s a smooth online experience and its own that confidently charts its own space in the platform fighter genre, too.

MultiVersus isn’t the next Super Smash Bros. Ultimate; it’s a beast of its own. If Player First Games and WB Games can maintain this game’s community with frequent, compelling updates and make the user experience a little more engaging, MultiVersus should have a bright future ahead of it.

Super Smash Bros. Ultimate is currently the king of the platform fighters as the latest entry in the series that invented the sub-genre. If you’re looking for more crossover-filled platform fighters, you can also check out Nickelodeon All-Star Brawl and Brawlhalla.

As a free-to-play fighting game still receiving new modes and updates, it’s hard to give MultiVersus a playtime estimate. If you plan on unlocking each character without spending a cent, you should be occupied for dozens of hours.

Yes. MultiVersus is a free-to-play game, so I recommend that fans of Super Smash Bros. Ultimate or any of the characters featured check out the game and play a few matches to see how they feel.

Topics
Tomb Raider returns as a mobile roguelike via Netflix
Best Alienware Deals: Save on gaming laptops, PCs and monitors
Best gaming laptop deals: Save on Alienware, Asus and more
MLB The Show 23 returns to Xbox, PlayStation, and Nintendo Switch this March
The best upcoming PS5 games: 2023 and beyond
The best upcoming PC games: 2023 and beyond
The best PS5 controllers for 2023
Warzone 2.0 Season 2: release date, Ashika Island map, and Resurgence mode
Here’s what E3 2023 could look like without Sony, Nintendo, and Microsoft
Marvel Snap’s Friendly Battles set a new bar for its post-launch support
WWE 2K23 improves the wrestling sim with subtle tweaks and a bit of chaos
Meta Quest Pro VR headset is $400 off (and save on Meta Quest 2)
How to change classes in Fire Emblem Engage