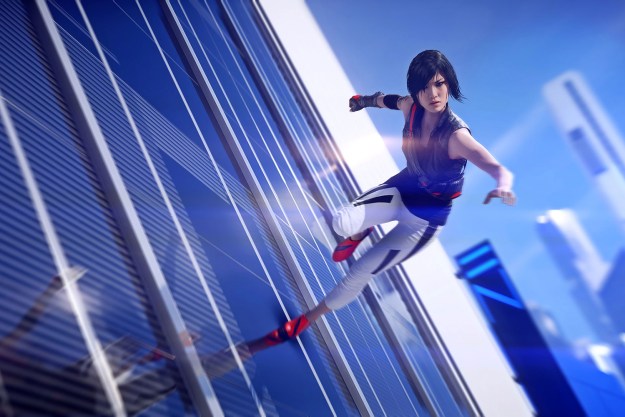 The original Mirror’s Edge is one of the few games that truly deserves the title of “cult classic.” The 2008 first-person action game successfully adapted parkour to gaming during the height of the urban free-climbing sensation, which wowed critics and a small group of fans, but failed to reach a larger audience. For years, that small group of loyal, vocal fans have asked for more Mirror’s Edge; hoping, against all odds, that EA would allow DICE to shift some its resources away from Battlefield and give Mirror’s Edge another shot.

Be careful what you wish for.

Mirror’s Edge Catalyst, a narrative reboot of the original, gives fans pretty much everything a fan of the original could have asked for: More insight into its vaguely futuristic dystopia, a mega city called Glass, and the freedom to just run around and climb all over the world. There’s a little more combat, but not so much that it’s a “beat-em-up” or a “fighting” game. Most importantly, it returns to and builds on the first-person parkour mechanics that made the original so compelling.

And yet, by expanding Catalyst to meet fan expectations (and check off some game marketing bullet points), developer DICE turned a fresh experimental game concept from eight years ago and made it into a very modern open-world sandbox game. The original Mirror’s Edge was special in its time. Mirror’s Edge: Catalyst is not.

Catalyst re-introduces players to heroine Faith Connors, an outlaw “runner” who eschews the control of the Conglomerate, a set of mega-businesses who employ, govern, and track the majority of the city. Where the original pretty much left it at that, Catalyst dramatically raises the stakes, putting Faith in the middle of a conspiracy that could lead to the end of free will for everyone in the world.

The open world does more harm than good, diluting the free-running experience.

Though DICE deserves kudos for cleverly remixing story elements from the original to fit and matter in the context of Catalyst’s more grandiose tale, it is very much a by-the-numbers “rebels fighting the empire” fare common among big-game storylines.

Narratively, the game’s strong suit is its refreshingly diverse cast: Faith and many of her core confidents are female and/or non-white. Though many of Catalysts’ characters aren’t there to generate any kind of narrative payoff, the world is simply more believable because it is so diverse.

Like the narrative, the core construction Mirror’s Edge: Catalyst creates a much larger world for players to exercise and play with the game’s core mechanics. Instead of optimizing your path through a set level, Faith can now run freely throughout Glass.

Mechanically, it’s as simple as pressing the jump button whenever you plan to scale up — whether its jumping and launching off a railing, or running along a wall — or the crouch button to scale down, mostly by sliding under pipes. No matter the story context or the ultimate goal, most missions boil down to free running in the most effective, efficient way possible by quickly reading and reacting to the terrain. The game provides clues to let you when Faith should perform certain types of moves: If you see dirty footprints aligned horizontally, for example, chances are you should wall-run across them to reach a new path.

Independent of any other factors, free running across Glass feels intuitive and flows well. You will naturally leap from building to building, cutting through offices and rooftop patios to move forward. The few new mechanics, like swinging between large gaps using a grappling-hook-like MAGrope, are all natural additions to Faith’s core abilities.

Annoyingly, though the gameplay of Mirror’s Edge remains impressive, the new open-world, go-anywhere nature of the game often impedes your ability to find that true future-parkouring nirvana. The open world does more harm than good, diluting the free-running experience.

While the game does leave clues suggesting how to traverse specific obstacles, there are no good options for communicating, on a macro level, how to get from point A to point B. Make no mistake: There are tools designed to help you get around, they just don’t work very well. The map, while useful for setting waypoints and fast travelling, does not show the actual paths and obstacles you need to figure out your way around.

In addition to the standard world map, Faith has “runner vision,” a point-by-point navigation system. Runner vision, as the game explains, shows you a route to your destination, but never the fastest one. At first glance, this seems like a perfect compromise: If reading the terrain is part of the game’s challenge, then it should be left to you to find the optimal path. This never works out, though, because the game does not do an adequate job setting mission-specific for you to riff on, or even clearly showing Faith’s next destination. Plus, Even if the runner’s vision were an efficient guide, the UI often focuses on smaller objects or a path that is not in your view.

The problems with runner’s vision make most of the game’s optional mission types quite frustrating, because the vast majority of them are timed. Whether you are running a “distraction” mission and bothering groups of security guards, or simply running a plain old timed “dash” route, so much of this game revolves are players figuring out paths that aren’t necessarily clear. It makes sense that a game whose primary mechanic is efficient movement would lean heavily on time trials, but there are only so many ways you can reframe the idea of quickly moving from point A to point B before you look desperate for ideas. The best missions are, uniformly, based around figuring a way or down a complex structure, without time constraints.

To counter-balance the repetitive nature of free running, Catalyst also features a slightly expanded combat system. In addition to taking down enemies with running and jumping attacks, Faith can simply fight enemies head-to-head with a pair of context sensitive attacks. In the context of running, the combat does work — seamlessly getting the jump on a guard mid-run feels very slick — but the game occasionally asks Faith to purposefully take down an area full of guards, which is just too much combat at once. While its clear you are supposed to figure out a sort of run that allows Faith to take out all of her enemies on the fly, some arena-like environments don’t lend themselves to that approach, and can turn into a messy 3D version of Punch-Out, with you figuring out which combination of punches and kicks won’t get blocked.

In general, many of Catalyst’s mechanics feel forced, or maybe included so that the marketing department can say they exist. Faith, for example, can earn experience, level up, and earn new abilities, but the progression feels bloated. Some of the skills, like the ability to roll at the bottom of a long jump, feel like they should be available from the beginning. Other mechanics, like a set of cards that explain each enemy-type’s strengths and weaknesses, feel like they were put in just to make the skill tree appear full.

Similarly, the game’s asynchronous multiplayer, which allows players to create their own runs and share them with friends, simply does not compare in scope or substance to the user-generated content features found in other games — even single-player focused ones.

Some games aren’t supposed to spawn sequels. Or reboots. Or become massive franchises. Not every idea can support the weight that falls on series like Call of Duty, The Legend of Zelda, or Assassin’s Creed. (Truth be told, even some of those franchises can’t really carry it, either.) By trying to make Mirror’s Edge: Catalyst attractive the wide audience it didn’t grab the first time around, this game lost some of its spark. Catalyst will not make you feel the thrill of the original Mirror’s Edge, nor will it make you feel something new. The parkouring that Mirror’s Edge fans want is in Catalyst, but you’ll have to climb over a lot of steep problems to enjoy it.