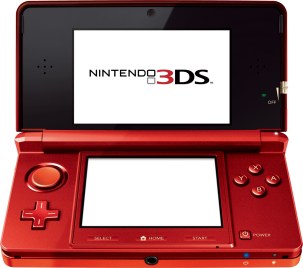 At a special event a couple of days ahead of the Tokyo Games Show, Nintendo president Satoru Iwata unveiled a number of new games for the 3DS game machine in an attempt to boost sales of the struggling handheld gadget. There was no mention of any accessories, such as the cradle device we reported on last week.

According to a Reuters report, Iwata said at the event that the company was introducing an unprecedented range of games for the 3DS. Around 30 were announced today, with plans for many more.

Some of the games will feature “the company’s much-loved Mario character and others [will be] specifically aimed at attracting women,” the report said.

“From the end of this year to the beginning of next, we are planning the kind of extensive line-up that has probably never been seen before in the history of video games,” Iwata told those at the event, held in Tokyo on Tuesday Japan time.

He added: “We will make an all-out effort to see that the 3DS sells enough to become the successor to the DS.”

The Nintendo 3DS, which allows 3D gaming without the need for special specs, has had a rough time of it since its launch in February of this year. A high price tag at launch and a dearth of decent games hasn’t helped. Add to that the growing popularity of smartphones and tablets – a hit with the kind of casual gamer Nintendo needs on board – and the Kyoto-based company has found itself with a fight on its hands.

With all this in mind, Iwata’s hope that the 3DS will sell enough to become the successor to the DS may be little more than a pipe dream. The popular DS (including Lite, DSi, and DSi XL) has sold around 148 million units since 2004. When the 3DS launched, it sold 3.6 million units in its first month, but only 710,00 from April to June.

Last month, in the face of these disappointing sales figures, the company was forced to cut the price of the device from $250 to $170. Nintendo had hoped to sell some 16 million units this year, but today’s announcement about a new selection of games hardly sounds like it’s going to be enough to tempt large numbers into buying the device.

In a somewhat ominous sign for the company, shares in Nintendo fell about 6 percent following the president’s announcement.

UPDATE: Although the Nintendo president made no reference to it during his announcement earlier today, it now appears that the company will be selling the cradle device for the 3DS. You can see it on the company’s Japanese website here. It’s priced at 1500 yen ($20) and has a shipping date of December 10. There’s no word on a US release date yet. [Source: Engadget via Joystiq]

UPDATE 2: More information from the recently-concluded Nintendo event are emerging – according to Engadget, Iwata has just unveiled a ‘Misty Pink’ version of the 3DS, colored….that’s right….pink. That’ll start shipping in Japan on October 20. Apparently 3DS owners will also be getting 3D video capture together with upgrades to the Street Pass Mii Plaza and eShop.