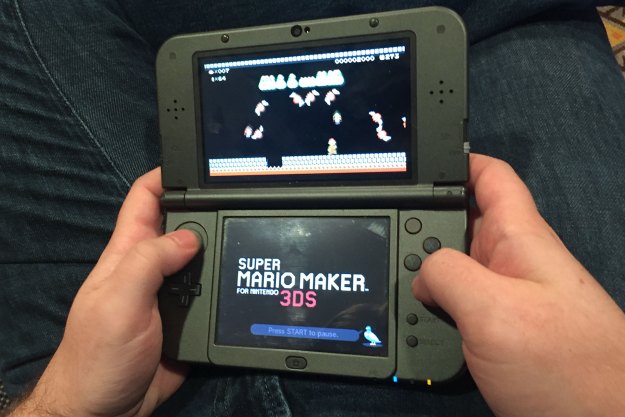 “Super Mario Maker is a great way to create fun Mario levels, but where are the online features?”

At first blush, porting Super Mario Maker to the 3DS sounds like a fantastic idea. More than just a game, the 2015 Wii U game distilled over 30 years of industry-defining game design into an elegant platform for playing, creating, and sharing 2D Mario platforming levels. Barring a few minor frustrations, we greatly enjoyed it and, even a year later, its community remains active, delivering on the promise of an unending supply fun, challenging, and interesting levels.

In a vacuum, the 3DS adaptation is fantastic, with a nearly lossless translation of the level editor and an excellent new collection of Nintendo-designed levels to boot. The problem is that this portable version does, in fact, exist in a vacuum. Levels made on the 3DS can only be shared through local wireless or StreetPass, limiting your ability to search for others’ creations.

There’s a great game in there

Editing levels on the touchscreen of the 3DS is a little cramped, particularly if you’re not using a 3DS XL, but the stylus is more than up to the task. Nearly the entire suite of tools available in the Wii U original returns. You can create levels using the art and assets from Super Mario Bros., Super Mario Bros. 3, Super Mario World, or New Super Mario Bros, each with its own slightly different signature physics and moves for Mario. The only component that didn’t make the jump from Wii U to the 3DS is the Mystery Mushroom, which let you transform Mario into sprites from other Nintendo games. Also, the limited processing power of the handheld, relative to the Wii U, imposes a slightly lower cap on the number of objects you can add to a level, though we never found it to be a problem.

A tutorial, presented in a typically charming fashion by a talking pigeon and a human woman, introduces the tools and the basics of how you might go about using them. The real design lesson, however, comes from what might be the best addition of the 3DS version, the Super Mario Challenge. These 100 levels, distributed across a linear series of worlds, were designed by Nintendo employees, and range from levels that you might have seen in earlier Mario games to much quirkier and more interesting creations.

Setting all of the creating and sharing aside, Super Mario Challenge is just a great Mario game in and of itself.

Completing the Super Mario Challenge unlocks new objects to use in the editor, which have great synergy with the inspiration provided by the levels themselves, which filter the anarchic, postmodern spirit of Super Mario Maker and its community through the expertise of Nintendo’s seasoned designers. Setting all of the creating and sharing aside, Super Mario Challenge is just a great Mario game in and of itself, which may be all that some people want out of it.

There are also two badges per level to earn for beating them under particular conditions, like never moving left, or reaching the end while carrying a P Switch. More than just replaying for the sake of higher scores or better times, these achievements encourage you to play levels in different ways that highlight the nuance of their multifaceted designs. It would be great if player-creators also had access to these sorts of alternate objectives when designing their levels, but they are currently limited to Nintendo’s artisanal levels in the Super Mario Challenge.

Where is the online sharing?

For many players, a top-notch classic Mario game, plus the tools to noodle around with their own creations will be more than enough value to make this feel worthwhile. As we’ve seen on the Wii U, however, the online sharing and emergent community elements are pivotal to Super Mario Maker long-term appeal, and in that regard this port is severely lacking.

You can only share levels created on the 3DS with other 3DS players, either by sending them through local wireless or broadcasting them to nearby players via StreetPass. Adding local sharing makes a lot of sense for taking advantage of the 3DS’s unique features. It’s not obvious, though, why local wireless and online support have to be mutually exclusive with the sharing infrastructure set up for the Wii U version, however.

In its perhaps myopic focus on how Nintendo thinks we should play, they may have lost sight of who their real audience is.

While the 3DS version can play many Wii U-created levels, the ability to search for them is severely limited, with only a filter for difficulty and no way to search by other parameters or for specific levels by ID number. Limiting the ability to find and curate fun content is a serious blow: There are gems to be found of course, but most player-created levels are still pretty terrible. Making it easy to find the good stuff is just as important as giving you the tools to make it.

These problems raise questions as to whom exactly this version is for. Nintendo seems to envision a sort of social immediacy, with kids breaking out their 3DS during recess to swap and play levels on the playground. With such a limited scope, Nintendo seems to have lost sight of the fact that its games appeal to adults just as much as it does to children.

Finding that kind of face-to-face time just isn’t realistic for older players, so focusing on local sharing at the expense of general online support makes the game a poor fit for many older players. The reveal trailer for the upcoming Switch console featured a notably older crowd than traditional Nintendo advertisements, potentially signaling an acknowledgement of their aging fan base, but that directive didn’t seem to reach the Mario Maker 3DS team.

We loved the original Super Mario Maker last year, and, in many ways, this is a seamless port, with a fantastic, complete 2D Mario game thrown in to boot. However, the gutted online capabilities cut this port off from a lot of what makes the game special, leaving the 3DS version in an odd position.

Nintendo has been diligent about adding new content and quality of life improvements to the Wii U version since launch, which could mean that many of our issues with the 3DS port will be addressed. However, the impending arrival of Nintendo’s upcoming hybrid portable/home console, the Switch, could mean that 3DS games, including Super Mario Maker, will receive less support in the near future.

Only if you don’t like to share online. If you love Super Mario Maker and really want to make levels on the go, then this is a great option. If mobility isn’t a priority, however, and you want the full Mario Maker experience, stick to the Wii U for now.