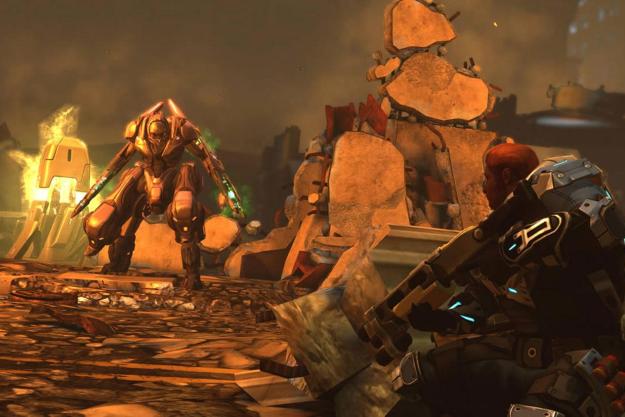 “While it reuses the story and scenarios of Enemy Unknown, XCOM: Enemy Within's changes and additions to the rules of the game bring it close to full sequel status.”

“What I wanted to make was a game that was true to the original.” That’s what XCOM: Enemy Unknown designer Jake Solomon said just a few short months before the game came out in 2012. “My prototype was basically the original game, so when we changed things we could look at it and ask: Is this better than it was yesterday?” Solomon and his team at Firaxis gave themselves an incredibly difficult goal in making Enemy Unknown, and they achieved it. What they made today was ultimately better than what was made yesterday. Enemy Unknown took the essentials of the classic XCOM: UFO Defense – a game of tactics, simulation, and economics built around fighting aliens and managing of a global military force – and recast it as a thoroughly modern video game.

Easier to pick up and play than the original and adapted for three-dimensional environments, but every bit as strategically demanding and rich as the original, Firaxis’ creation answered perfectly the question of what a video game sequel should be. Pushing story forward isn’t enough; a sequel needs to reconsider the rules. That’s why the new expansion, XCOM: Enemy Within, is so impressive. While it reuses the story and scenarios of Enemy Unknown, its changes and additions to the rules of the game bring it close to full sequel status. One year later, Firaxis has once again made a better game today than the one they made yesterday.

You know the story already: Aliens invade Earth like a bunch of bulbous-headed jerks and start turning the population into monster slaves, helpers to aid in terraforming and subduing the planet. The world’s nations pool their resources – cash, soldiers, scientists, engineers, and the best gear around – to form XCOM, a military force that’s a little bit Starship Troopers in muscle and a little bit Fantastic Four in scientific R&D. You take the role of the unseen commander, giving every soldier their orders in alien confrontations on land and in the air, while also managing every aspect of XCOM operations, from new research, to weapons creation, to the construction of new facilities.

One year later, Firaxis has once again made a better game today than the one they made yesterday.

Both the turn-based fighting and the economic management of XCOM remain a treat in Enemy Within. Even on the easiest difficulty setting, the game throws intellectually meaty scenarios at you. Take the confrontation in China where you meet Shaojie Chang, a former mobster that joins XCOM after you help escort him through a city graveyard to safety. This mission, originally included in an Enemy Unknown DLC pack, has you guiding your squad through dense pockets of graves that offer either limited cover or so much that your safety and aim are constrained. Thin Men, gangly, black suit-clad alien foot soldiers that can poison you, drop into the map at key moments, leaving you surrounded. Do you take in snipers that can heal and attack from a distance, or heavy soldiers armed with shotguns? How quickly have you been able to develop new weapons back at base? These challenges are still a joy and it’s nice to have content like the mission with Mr. Chang included in this set. Enemy Within‘s expands those strategic options in much greater ways, though.

Everything changes in the game when, in one of Enemy Within‘s earliest missions, Meld is introduced. A bio-technological substance, Meld alters the flow of most confrontations in the game while opening up not one but two entirely new categories of soldiers to command. The alien goo appears in canisters on the battlefield, but it’s volatile and will self-destruct if you don’t collect it within a set number of turns, or win the fight before it blows. This adds a whole new layer of risk and reward to each encounter. Do you rush to the Meld so you can build new soldiers and weapons or stay protected and lose out on better upgrades?

These new resources bring sweeping changes to your strategic options. Meld allows you build two new types of facilities in your base: a genetics lab and a cybernetics lab. The former lets you use Meld to introduce the game’s new Gene Mods to your squad of soldiers. Gene Mods offer a plethora of new abilities, like eye implants that provide an aim boost after missing a shot or leg implants that heal you. The cybernetics lab, on the other hand, lets you build full-on cyborg soldiers called MEC Troopers that can pilot mechanized battle suits.

Gene Mod and MEC upgrades both cost Meld and take soldiers out of action during the conversion. MEC Troopers also carry an added cash and Meld cost, from having to build their various battle suits. This keeps the value of these powerful new abilities, but still within reach. Gene Mods let you further develop your favorite squad members, but MEC Troopers are worth the extra investment, for making battles feel the most dramatically different.

One of Enemy Within‘s forty new missions, in a Canadian fishing port, exemplifies how these changes amount to an entirely new game. When your squad lands, you find the town deserted, occupied by lonely giant fish and sharks dangling from poles on the docks. That is until spiny Chrysalid aliens start bursting out of the carcasses.

Everything changes in the game when, in one of Enemy Within‘s earliest missions, Meld is introduced.

These are the enemies that turn civilians and human soldiers into insane zombies. Cyborgs don’t need to take cover and they can’t be turned into zombies, though. The mission can be completed easily by sending two hulking cyborg soldiers into the middle of the fray, destroying cover as they go and taking punishment, while ranged shooters help take out the Chrysalids. What was previously a nightmare scenario in Enemy Unknown – Chrysalids everywhere! – is now a very manageable encounter thanks to the new strategic opportunities.

That’s just one of many entirely different tactical scenarios that Enemy Within brings to the XCOM formula. When coupled with new advanced options in the menu like the ability to randomize which abilities are unlocked as soldiers level up, the blend of old and fresh strategies make this feel like a legitimately different game, far moreso even than Enemy Within‘s new Covert Ops missions.

The most significant new story element aside from Meld is the introduction of EXALT, a human organization that supports the invasion and attempts to disrupt XCOM’s fight against the aliens. Covert Ops missions task you with sending a single soldier into a hostile environment in search of info on EXALT bases. This part is hands-off; you just choose a destination. Tactical squad play comes in when you send out a team to retrieve the lone operative, pitting XCOM troops against human aggressors.

While the new content is certainly welcome, fighting EXALT ultimately isn’t too different than fighting the game’s aliens. Humans may use different tactics (healing squad mates instead of trying to turn you into a horrible zombie, for example) but they’re defeated using the same principals of endurance and slow offense. Even if it isn’t as tangible a change as the new soldiers in your organization, the EXALT storyline does add even more variety to a killer package.

Nitpicks are few. While the PC and Xbox 360 versions of the game weren’t available for comparison, the PlayStation 3 version of Enemy Within is particularly buggy. Textures are slow to load, both during a battle and back at XCOM base, and the game simply froze on us a couple of times, requiring a hard reset. Nothing flat out broke the game or caused a loss of data, though, and the aging console tech never impeded on the fundamental quality of the game itself.

A narrative sequel to Enemy Unknown will be welcomed by fans whenever it arrives. There are plenty of places to take the series in a future after this adventure. Maybe Earth brings the fight to the aliens completely changing how resources are gathered in the game? The options are there. Enemy Within is halfway there, though, in terms of making those expansive rule changes that mark a great game sequel. The new story content in Enemy Within is nothing to dismiss, but what it adds mechanically is why even old players that have gorged on last year’s game should dive back in.

This game was reviewed on an Xbox 360 using a copy provided by 2K Games.