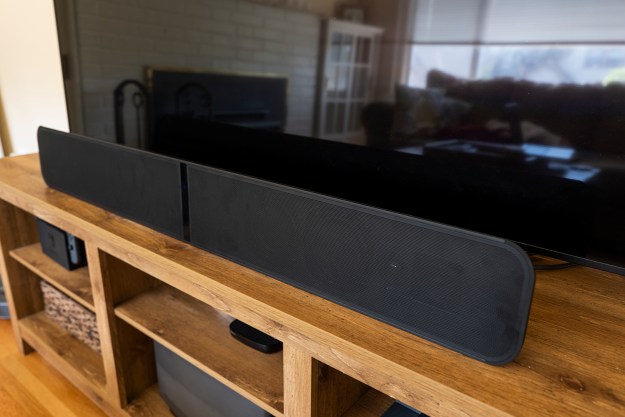 “The excellent sound quality is marred by poor design choices and a bad user experience.”

Bluesound may not be a household name, but it’s been a close competitor to Sonos in the battle of overconnected, smart, high-fidelity audio. The Pulse Soundbar 2i is the company’s second-generation soundbar designed for the living room, and it boasts serious audio chops.

At $900, it’s slightly more expensive than the Sonos Arc, but doesn’t offer Dolby Atmos support as its competitor does. Does it have other features that might make it a better choice? Let’s take a look.

The Pulse Soundbar 2i is not pretty. When we review soundbars, we do so from the perspective that they should not draw attention to themselves. The best ones are slim and compact, and when you are forced to look at them, they at least have refined lines and a classy finish. The Bose Soundbar 700 is a great example of this.

The Soundbar 2i looks built to do the polar opposite. With more emphasis placed on sound quality than how it would look placed in a room, the Soundbar 2i stands at a towering 5.5-inches tall. To put that in perspective, the feet on my 65-inch Sony LED television only lift the bottom of the TV a little more than 2.5 inches off its media stand.

That means that if I were to place the Soundbar 2i in its optimal position directly below the television, about two inches of the bottom of the TV will be obscured by it. It’s a good thing the soundbar has an IR receiver on the front, because thanks to its height, the IR receiver on my television is blocked.

This is not ideal, and for anyone with a similar living room setup, the Pulse Soundbar 2i is going to look heinously large and be just as intrusive. If, however, you choose to wall mount your television, this is less of an issue. Bluesound includes a variety of wall mount adapters to help make that easier.

If the reason Bluesound made the Soundbar 2i so tall is to accommodate its system of speakers, then it was absolutely going for sound quality above all else. The specs on the drivers in this soundbar are impressive. It encases two 1-inch tweeters, two 4-inch woofers, two 2-inch midrange drivers, and two 4-inch passive radiators.

If you’re looking for a variety of connection options and codec support, the Soundbar 2i is flush with them. In addition to supporting just about every audio file format you can think of, it also supports a host of codecs including aptX via Bluetooth, as well as USB, Optical, RCA line-in, HDMI ARC and eARC. There’s also Wi-Fi for direct streaming from a number of services including Master tracks from Tidal.

If your home has it, odds are high that the Soundbar 2i can play it. Thanks to Bluesound’s seriously impressive list of support devices, you have a lot of options if you plan to invest in this system.

Should you want a wireless connection to the Soundbar 2i, you can grab an NAD M10 A/V receiver that has built-in support for Bluesound. If you have an existing home theater system that you want to integrate the Soundbar 2i into, the company’s Node 2i will connect Bluesound’s app interface to that system and integrate it all with the Soundbar 2i for a multiroom setup without having to buy all new equipment to get it. The number of add-on options here is significant, and it’s an area where Bluesound has a lot more going on than its competitor Sonos.

If you’re looking for a variety of connection options and codec support, the Soundbar 2i is flush with them.

Unfortunately, I am not the biggest fan of Bluesound’s app, which is the control center for all of Bluesounds’s equipment, including the Soundbar 2i. Not only is it buggy, but it’s simply not intuitive to use. Sure, there are a lot of options in the app that allow you to fine-tune the kind of audio you are going to get out of the Soundbar 2i, but finding and using those features doesn’t occur how I would think. It’s in this area that Sonos’ app is just a lot more usable.

The Bluesound Soundbar 2i makes me feel stupid.

Specifically, using the Soundbar 2i with HDMI ARC was not explained by any of the included literature or through a guided setup in the app, and the soundbar isn’t smart enough to just default to incoming HDMI signals and give you audio.

When I first plugged the soundbar in and set it up via the app, at no point did it say that I had to enable HDMI ARC through the app in order to get sound pass-through. I had to head to Google and figure out how to get sound out of the bar. That’s how little I was told by the device about how it functions.

This is a step that feels like it should just happen, not something that I should have to tell the soundbar to do via the app. At the very least, the app should have been more forthcoming about what the Soundbar 2i is capable of, and how to properly complete setup.

The Soundbar 2i doesn’t have an included remote. I am not sure how that was a decision reached by anyone at Bluesound, but it’s not one I can get behind.

For one, it’s a speaker system designed for home theater — it needs a remote. Second, if you don’t have HDMI ARC on your television and plan to connect through optical, good luck easily changing the volume of this soundbar. All of the controls are found in the app (more on that in a moment), but having to use an app to control your soundbar while sitting in your own living room feels wonky and disjointed, not to mention slow and tedious. You can pick up the Bluesound RC1 IR remote, but that’s an additional $60 for something that should have been included. We’ve complained about Sonos charging too much for accessories, but Bluesound is taking that to a new level.

On the plus side, the Soundbar 2i has the ability to work with most IR remotes you’ll find in a household, provided you set them up with the app. That sounds great, but the app never tells you that is an option and neither does the literature that ships with the bar. You have to almost stumble on it as a capability. This all loops back to the issue at hand — the user experience is exceptionally poor. Everything about the Bluesound experience feels like it was made by an engineer who wanted to pack as much as possible into the product, but had no one’s help to massage usability into it.

The Soundbar 2i makes me feel stupid. Sonos does an excellent job walking you through the setup of any of its devices, mixing picture cues with specific instructions so that you never feel like you’re lost. When you’re working with a lot of different devices that can offer a host of services, this kind of hand-holding is an absolute must. It’s a shame Bluesound doesn’t help you as a consumer through the process, because the acoustic quality of this soundbar is outstanding.

I mentioned the impressive driver array in the Soundbar 2i, and while they aren’t pretty to look at, they produce an outstanding auditory experience. I am very pleased with the quality of sound coming out of the Soundbar 2i, and it almost fully redeems the product’s aforementioned glaring UI issues.

Music is where the Soundbar 2i really sings.

Though it won’t match the raw power of a subwoofer, the bass in the Soundbar 2i provides more than adequate rumble to movies, and adds depth to music.

I actually preferred the Soundbar 2i as a music listening speaker over a home theater centerpiece. While movies sound great, they lack a surround sound feel. Achieving this in a single center-weighted bar is difficult, but not impossible. The Sonos Arc does a better job in this department thanks to its Dolby Atmos support, and The Fives by Klipsch also does a better job hitting me with top-quality cinema sound thanks to true left and right separation.

While cinema isn’t its strongest suit, playing music is where the Soundbar 2i really sings.

All those drivers work together to make for sound that allows you to dissect every specific instrument from an orchestra, or clearly hear the nuance of the melodies in a rock ballad. Bluesound has tuned its Soundbar 2i to work almost like a reference monitor, with incredible clarity and excellent neutral sound reproduction.

I liked the sound out of the Soundbar 2i so much I moved it away from my television — since it was blocking the lower portion of the screen anyway — and placed it on my mantle so that it was in prime position to play music while I was reading on the couch. It beautifully rendered sound across my living room, and as I enjoyed that lovely musical experience, I lamented how this wonderful piece of sound hardware was being held back by UI decisions that were so easily avoidable.

I did try out the Soundbar 2i with Bluesound’s wireless subwoofer, the Pulse Sub, but was unimpressed. The sub, though slim and easy to connect, offered nearly no change to how I was experiencing either music or movies. Even at maximum power, it failed to give me any of the rumble I was looking for. I think the soundbar does a plenty good job on its own, so you can feel free to pass on the sub for now.

The Bluesound Pulse Soundbar 2i is a bit of an oddball in the soundbar space. It’s better at music than cinema, is formatted to work well specifically with wall-mounted televisions, and is heavily reliant on its app. Excellent overall quality helps redeem it, but most people should opt for Sonos’ more intuitive options.

The Sonos Arc is the most direct competitor, offering the same promises of a soundbar with multiroom connectivity. As a bonus, the Arc is $100 less expensive and supports Dolby Atmos. The Bose Soundbar 700 is also an excellent choice, and The Fives by Klipsch gives them all a run for their money as true stereo monitors.

Bluesound provides what is the standard 1-year warranty, but the build quality is excellent, and I don’t expect this device to fail any time soon.

No, it’s hard to recommend the Soundbar 2i. Despite outstanding audio quality, it’s better as a speaker than a television soundbar, and the UI needs a lot of work. That makes it a pass from me.

Topics
BluOS will be updated to 4.0 with a fresh look, new features
The best ultra short throw projectors for 2023
Best 4K projectors for 2023
The best Bluetooth speakers for 2023: Marshall, Sonos, JBL, and more
The best headphones for running in 2023
Amazon adds audio personalization to Echo Buds 2
Bowers & Wilkins’ wireless earbuds get better battery life and longer range
NAD’s CS1 adds wireless streaming music to any audio system
Beats Studio 3 headphones are $120 off today at Amazon
How to watch Puppy Bowl 2023
Samsung accidentally reveals price of its 77-inch QD-OLED TV
The best QLED TVs for 2023: bring on the brightness
The best OLED TVs for 2023: from LG, Sony, and Samsung