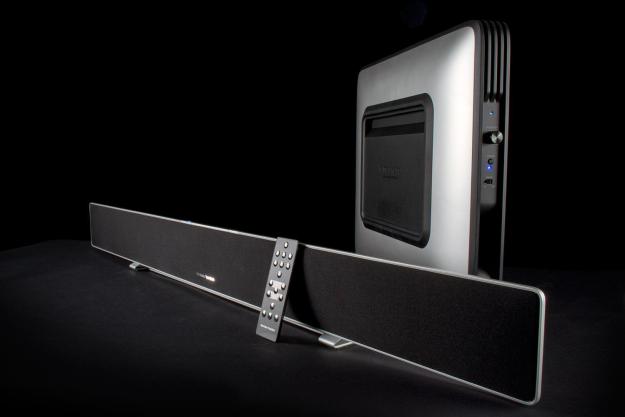 As the genre of sound bars has blossomed in recent years, design has transitioned from compact, inexpensive sound solutions, to stylish pieces that aim to wow users as much with their good looks as their sonic performance. Harman Kardon has taken that trend to heart with its latest high-end offering, the $1,000 Sabre SB35.

Crafted from aircraft-aluminum into one of the slimmest profiles we’ve encountered, the Sabre SB35 certainly impresses, appearing to stretch the limits of what modern sound design can do. And perhaps just as impressive is its subwoofer counterpart, which has such a slender frame it’s actually designed to be wall mountable – not your usual vision of the fat and heavy cabinets most subs inhabit. All of which raises the question: Can this super-trim system deliver on sound as well as style? After a few days of evaluation, we found out.

Pulling the bar from its cardboard home revealed a sinewy silver fin, covered with a smooth speaker screen at the front, and a good selection of inputs buried within a cubby on the rear. The unit felt fairly stout as we positioned its 5.7-pound frame onto its skeletal aluminum stand, and setting it in place angled the bar ever so slightly upward.

The wireless subwoofer really sets the tone for progressive design; its thin rectangular disc recalled images of a TV room from Blade Runner. Curvy airports peek out of the center section of the cabinet, dividing a firm plastic face on the one side, and an open driver under a protected speaker screen on the other.

The black and silver color scheme is chic and modern, and the unit looks fantastic beneath a flat screen.

As we examined the back panel of the bar, we noticed the standard fare: a power port, a digital optical port and 3.5mm Aux input, as well as an input for an IR blaster. The right side boasts a more progressive input configuration, trading standard HDMI ports for a trio of space-saving micro-HDMI inputs, along with a micro-HDMI output port for TV connection.

We were impressed by how much space the micro HDMI ports saved – until we got our hands on the accessories. Digging through the box uncovered only a single HDMI to mico-HDMI cable. For the average user, that means that after throwing down a grand on the Sabre, a separate trip is still required to purchase a bounty of new cables for system setup. Other accessories in the box included an RCA-to-3.5mm cable, a digital optical cable, an IR transmitter cable, and a sleek little silver-backed remote.

Cable woes aside, HK’s new Sabre is one of the sexiest sound bars we’ve laid eyes on. The black and silver color scheme is chic and modern, and the unit looks fantastic beneath a flat screen. As for the subwoofer, no one will know it’s a subwoofer. While most subs are designed for condemnation to the corner, HK’s little unit looks like it belongs on a desktop feeding a hi-res monitor. Anywhere you place it, including on the wall, will satisfy.

The sub sits 18-inches high by 15-inches on its broad side, while the slim center section is a mere 3.3 inches across. The cabinet is heavier than it looks, weighing in at almost 13 pounds – a hefty load for a wall-mount. A tiny 4.5-inch driver rests inside the cabinet, which likely utilizes some form of sympathetic radiator configuration, though Harman Kardon does not specify as such. The sub is powered by a claimed 100 watts of juice, and offers a phase control switch, a pairing button, and a crossover dial that runs from 0-250 Hz.

The main bar measures 45 inches across, just over 4 inches high, and a meager 1.25 inches deep. A panel of silver buttons along the top of the bar control power, source, volume, and Bluetooth pairing. Inside the slim frame rest 10 individually-powered drivers, including six 1.75-inch drivers, and four 1-inch drivers, powered by eight channels, four of which have a claimed 20 watts per channel and four have 15. Frequency response for the entire system is claimed at 43Hz-22kHz.

If you’ve procured the necessary cables for HDMI connection, you’ll be able to route signal from three components to the TV via HDMI, complete with an onscreen menu (in what inexplicably looks like Olde English font?) that walks you through the Sabre’s features. If you’re like most of the world, however, the optical port connection from your Blu-ray player or gaming console will have to suffice until the UPS man arrives. Luckily, you can still monitor features from the LCD display on the front face, which indicates source selection, mode, and basic commands such as bass or volume adjustment from behind the speaker screen.

The Sabre is loaded with DSP, offering 5.1 virtual surround from both the normal virtual mode, or from Harman Kardon’s exclusive WAVE mode technology, which offers low, medium, and high levels of surround sound engulfment, designed to accommodate the size of the room. We ended up getting better results from the basic virtual mode. Surround sound codecs include Dolby Digital, Dolby TRUEHD, DTS, and DTS-HD. The system also includes Harman Volume, a form of limiting which normalizes sound to balance loud and quiet moments. It works alright on low for movies, but it’s pretty abrupt when it kicks in, especially if you forget to disengage it while rocking tunes from your smartphone.

For music playback, you can connect via the Aux input, or stream via Bluetooth. Bluetooth pairs automatically to your device upon startup once you’ve initially connected it, and even powers the system on when you press play on your device.

The Sabre’s slim remote takes you through all of the system’s features, offering a separate key for each source, mute, volume, bass control, Harman Volume, power, and all of the playback modes including stereo, wave, and virtual surround.

We’ve essentially covered setup already in our complaints about the system’s lack of HDMI to micro-HDMI cables. However, we did need to mention that when we first powered the system on, we had a hard time getting the wireless sub to pair. We pressed the pair button several times, and eventually had to power-cycle the system. After initial pairing, however, the sub found its partner easily upon startup, with no further issue.

As we did not have HDMI to micro-HDMI cables on hand during our initial evaluation, we spent most of our time testing the system via the optical output of our Blu-ray player.

As is often the case, the first thing that got our attention with the Sabre was the booming power of the wireless sub, which offers way more potency than its thin frame would suggest. As we popped in our trusty copy of JJ. Abrams’ Star Trek refresh, the system showcased reams of low-frequency force, and the sub did a decent job melding with the lower frequencies of the bar for a seamless blend between the duo. The transient response was slightly sluggish at times, but it’s remarkable how much power that little cartridge can produce.

The midrange seemed to have a huge chunk carved out at the center.

However, it was hard to fully diagnose the bass due to a strange phenomenon, namely the fact that every time we switched surround modes, or engaged the Harman Volume feature, the sub level jumped to what sounded like full blast. For a while, we simply thought the system was out of balance. Once we realized what was happening, we discovered that a simple click of the bass control brought the sub back to its desired level. We’ve contacted Harman about the issue, and representatives suggested it is a software issue, and that we do not have the final version.

Even putting aside the wild bass issues, the Sabre had some troubles across the frequency spectrum – especially for its price point. Audio seemed to be at its best in the lower midrange, which pulled forth the richer dialog from lower voices like Captain Pike, and Spock with excellent presence and a velvety texture. The system also conveyed plenty of clarity up high, revealing clean detail in the treble. However, the midrange seemed to have a huge chunk carved out at the center, which muffled the sound, and kept us on volume control for a large portion of quieter moments, trying to make out dialog and midrange instruments in the soundtrack.

That softer midrange gave way to a thin and pale color at around the 5K frequency, and then climbed into downright sharp and spindly territory in the rest of the treble frequencies. The rotors on Spock’s futuristic spaceship were metallic and sharp. Punches in fight scenes, phaser shots, and even strings and high percussion poked through with a razor-thin slice along the edges.

To correct the issue, we bounced between stereo and virtual surround, but found the former too muddy, and the latter too bright. We ended up settling on the virtual mode, which did offer a pretty expansive soundstage, though we never heard much in the way of surround engulfment.

Moving through a range of demo discs, the issues in the treble persisted, from crackling gunshots and thin vocals in Skyfall, shrill screeches from the flying fish in Life of Pi, and aluminum cuts from the rising beanstalk in Jack the Giant Slayer. When we pushed the system too hard, the drivers inside the bar had a tendency to rattle the frame into distortion.

The balance issues were less pronounced when we turned to music playback via Bluetooth. One of our favorite evaluation selections, Nickel Creek’s “Out of the Woods,” had a relatively smooth overall sound, with decent clarity, and less bite to the upper register. We did notice a slightly aluminum quality to the vocals at times, and definitely wished for more presence in the middle of the sound, but the strings of the guitar and mandolin cut through with clarity, and offered their familiar golden ring.

We heard more of that muffled pit in the midrange when we called up other pop tracks, however. MJ’s lower vocals in the verses of “Billy Jean” tended to lose ground amongst the rest of the instrumentation. Conversely, the always bright snare snap at the intro groove was especially taught, as was the barrage of shakers at the edges of the stereo channels, and pushing the volume reproduced more of that driver rattle. We definitely noticed some nice detail throughout our sessions, especially along the stereo edges, but we were expecting more from a grand’s worth of hi-fi machinery.

Harmon Kardon’s Sabre SB35 offers an extremely low-profile design and a gorgeous form factor, but unfortunately, its beauty is mostly skin deep. While it had its moments during our evaluation, and certainly offers a vast improvement over a flat screen on its own, it never reached the kind of fidelity we expect from $1,000 worth of components. Even if the bass didn’t bounce randomly back and forth, distortion and balance issues make the unit a tough sell at its price point.

We recommend instead checking out the Definitive Technology Solo Cinema Studio, which offers brilliant sound, in a package that’s only slightly less sexy.