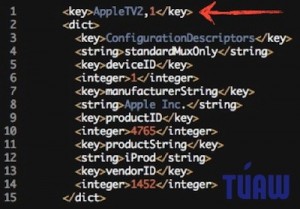 Much to Apple’s chagrin, the Library of Congress recently legalized jailbreaking of electronic devices in a clarification to 1998’s Digital Millenium Copyright Act. The move puts Apple in an unpleasant spot as the company has long reveled in locking its consumers out of its devices’ built in functionality, and yet has proven utterly inept at developing sufficient protections to prevent firmware savvy software enthusiasts from breaking these locks.

Apple has perpetually expressed its dismay at this state of affairs, saying that jailbreaking destroys the “magical” experience of its devices. Apple also claims jailbreaking supports a sickening slew of crime, including terrorism, drug-dealing, and organized crime.

It didn’t take long for the new Apple TV set-top box to be jailbroken. Why the need for the jailbreak? The new, much smaller box — which lacks a hard drive — runs a full version of iOS (versus the modified version of OS X 10.4 or OS X 10.5 that Apple’s first generation models ran). Yet Apple has locked users out of using apps on the device.

The jailbreak uses SHAtter jailbreaking tool, developed by @pod2g. SHAtter is a jailbreak for iOS that Apple is literally powerless to fix, as it exploits the boot ROM. The tool can be used to trick Apple TV into removing the current iOS firmware image and installing a jailbroken image created by the Apple Dev Team’s Pwnage tool.

Like the recent iPhone iOS 4.1 jailbreak, the new jailbreak is extremely impressive, given how quick its turnaround was. The new second gen Apple TV hasn’t even widely shipped yet. Apple has been quiet about when exactly it will ship. Initially it indicated that it would ship in September, but customers are now reporting that the ship date may have been bumped as late as October 18. Apple may be having some supply issues, given the long shipping delay. Apple TVs are currently available at some Apple stores, though.

Despite the promise of the jailbreak, there are some definite limitations. While the Apple TV’s Apple A4 ARM processor and 256 MB should be beefy enough for most apps, the 8 GB of flash memory doesn’t leave much room for such apps. Further, than memory is used for cache, so there’s no telling how installing third party apps might muck with performance.

The jailbreak is not widely available yet in easy to digest form, but then again neither is the Apple TV. Video of it in action can be found here.

Despite exposing vehemence towards the jailbreaking community, Apple has begrudgingly accepted some measures pushed by jailbreakers — such as apps on the original iPhone. Likewise some believe that jailbreakers may force Apple to release an official App Store for the Apple TV. In this way the jailbreak may not only benefit those who use it, but may benefit Apple TV owners in general.

Google TV tips and tricks you need to start using now
Apple AirPods Pro 2 vs. Samsung Galaxy Buds 2 Pro
Nothing teases its next wireless earbuds with photos of a lipstick-like case
The best speakers for 2022: great hi-fi options for music and more
The ‘streaming wars’ aren’t what you think
Google Chromecast tips and tricks to make you a master caster
How to set up a Google Chromecast to get streaming fast
How to clean your TV screen
How to share a Spotify playlist
How to watch the DC movies in order
Thursday Night Football streaming issues ‘going to be less and less a thing’
Grab this LG 55-inch OLED TV deal from Walmart and save $400
DirecTV to reimburse NFL Sunday Ticket subscribers for Week 2 fumble