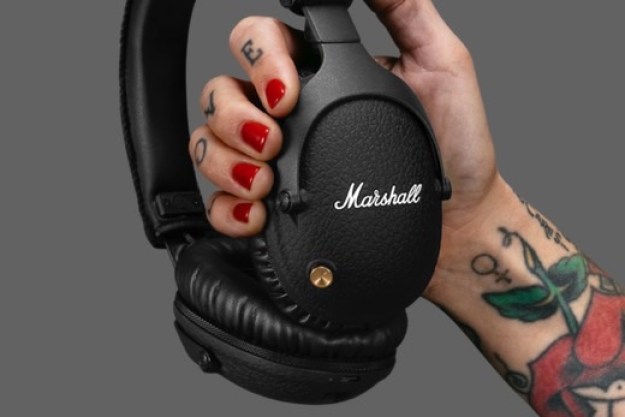 Thinking of buying a set of active noise canceling (ANC) headphones? In addition to the many excellent models you’ll find on our best noise-canceling headphones list, we now also recommend the $320 Marshall Monitor II ANC.

These ANC cans capture the iconic Marshall design language while adding some cool features to create a stylish alternative to the headphones made by Sony, Bose, Apple, and others.

But the competition is stiff — do the Marshall Monitor II ANC have what it takes to justify their hefty price? Let’s take a look.

Props go to Marshall for creating packaging that at least tries to be sustainable. It’s mostly recyclable cardboard, save for a few bits of foam that will eventually need to be discarded in a landfill. Inside, you’ll find the Monitor II ANC, a USB-C charging cable, a coil-style 3.5mm analog cable, a quick-start guide, and a soft fabric carry pouch.

Whether you dig Marshall’s guitar amp-inspired design language or not (I think it looks awesome), you’ve got to admit, the Monitor II ANC are peak Marshall.

From the textured black plastic on the earcups to the coil of included analog cable and, of course, the distinctive Marshall script logo, these headphones exude a rock music vibe you won’t find on any other cans.

And Marshall’s commitment to this look hasn’t gotten in the way of some eminently practical features. The combination of the three sets of hinges and pivots lets the Monitor II ANC contort themselves into an incredibly compact shape. I’m hard-pressed to think of a set of full-size headphones that are more travel-friendly.

While it’s true that most headphones at this price (and many that are considerably cheaper) come with a zippered, hard-shell case, the way the Monitor II articulate makes them beg to be tossed into a bag. Speaking of the included carry pouch, it’s hard not to take note of the way Marshall has channeled the Herschel backpack look for its black denim bag. Very cool.

The earcups are super low-profile, even with the generous padding afforded by the ear cushions, which gives the Monitor II a clean, head-hugging appearance. And when you pull them off your head and let them hang around your neck, they easily fold flat against your collarbones.

The construction is mostly plastic, but Marshall has used metal for the earcup forks and headband sliders, which helps to give these cans a robust, durable feel.

At 11.29 ounces, the Monitor II ANC may not be considered light when compared to other over-ear headphones, especially the featherweight Sony WH-1000XM4 (8.8 ounces), but they don’t feel especially heavy when worn. I credit the combination of clamping force, ear cushion fit, and balance for how well they sit.

Given my Dumbo-like ears, I would prefer slightly deeper cavities in the earcups, but overall, these headphones are more than comfortable enough for hours of continuous use.

I’m a really big fan of the Monitor II’s controls. They’re simple and effective. The gold-tone button that sticks out of the bottom of the right earcup is actually a tiny joystick that you can click for power, Bluetooth pairing, call answer/end, and play/pause. You nudge it up, down, forward or back for actions like volume and track control.

There are two other controls that you’d miss entirely if you weren’t looking closely. Each is set into the hinge point of the earcup forks, where they blend seamlessly into the design and are easy to reach. The left button is for switching between ANC and transparency modes, which happens very quickly. The right “M” button, which is user-configurable, with your choice of EQ mode switching, activates Siri (iPhone only) or Google Assistant.

You make these selections and others in the Marshall Bluetooth app.

Instead of spreading out and creating a warm thrum that you can feel, the bass remains somewhat two-dimensional.

Bluetooth range on the Monitor II is about 20 to 30 feet, which should be enough for most situations.

Unfortunately, unlike many Bluetooth headphones, you can’t pair these cans with more than one device at a time, which makes them less suitable for folks who like to regularly switch between their phones and laptops.

There’s also no wear sensor, so removing the headphones from your ears can’t trigger an auto-pause of your music.

Overall, the Monitor II ANC sound very good. In the factory EQ setting (known as the “Marshall” sound), the sound veers toward higher frequencies, but the Marshall app lets you choose from six more EQ presets, as well as lets you create your own custom balance.

These adjustments help the Monitor II deliver more bass if you want it, and I was able to find settings that worked with a wide range of genres, from rock to classical.

Throw on a track like Jay-Z and Swizz Beatz’ On To The Next One, and the intensity hits you like an electric shock.

The soundstage isn’t as wide or as detailed as you’ll find on the Sony WH-1000XM4, but what the Monitor II lacks in terms of openness, they make up for with energy.

There’s a precise, bright, and punchy quality to the acoustics that puts a sharp focus on snare drums, cymbals, vocals, and higher frequency woodwinds like the clarinet.

Throw on a track like Jay-Z and Swizz Beatz’s On To The Next One, and the intensity hits you like an electric shock.

Deeper, more resonant sounds like jazz bass, which rely on the middle-low to low frequencies don’t fare quite as well. Instead of spreading out and creating a warm thrum that you can feel, they remain somewhat two-dimensional.

All of this adds up to a set of headphones that have clearly been tuned for energetic rock, pop, and hip-hop music.

Some headphones with active noise cancellation seek to eliminate as much background noise as possible. The Bose Noise Cancelling Headphones 700 are the poster child for this approach. Marshall’s Monitor II ANC aren’t as aggressive — you don’t quite get that cone-of-silence effect — but they still substantially reduce low-to-mid frequencies when ANC is engaged.

I found it worked best when listening to podcasts, where sounds that would otherwise make it hard to hear spoken words were very effectively muted. As a tool for silencing a noisy environment, they weren’t as helpful due to a small amount of detectable hiss that I found tiresome after a while.

Transparency mode, on the other hand, is excellent. A press of the dedicated ANC button and the world was suddenly very audible.

You can fine-tune both ANC and transparency modes in the Marshall app, but I found the 100% levels to be best in both modes.

They also have a respectable fast-charge feature that gives you a claimed five hours of playing time after 15 minutes of charging.

From what I could tell, these numbers are accurate, and unlike some wireless cans, you can use the Monitor II ANC with their analog cable even while recharging them, so you’ll never be without your tunes.

Calls on the Monitor II ANC are generally good. They’re able to cancel out most background sounds when calling outdoors while keeping your voice reasonably clear. It’s not the high fidelity you’ll get from the Bose Noise Cancelling Headphones 700, but it’s perfectly fine for most calls and they perform very well indoors.

For some reason, you can’t choose how much sidetone you get during calls (this is the equivalent of transparency mode for calling). The headphones switch to what sounds like about 50% transparency — enough to hear your own voice a little more clearly, but not quite as clearly as if transparency was at 100%.

As with most Marshall products, the Monitor II ANC come with a price premium that can be a bit hard to justify on performance alone. But if you like that retro-cool, guitar amp style that only Marshall can deliver, these cans are a fun, full-featured set of wireless companions.

If you don’t mind their relatively conservative appearance, the $280 Sony WH-1000XM4 are an excellent alternative. They’re cheaper (by $40), lighter, and more comfortable, with better sound quality and ANC, and they have more features like wear sensors and Bluetooth multipoint.

But there’s no denying that when it comes to style, the Marshalls are really in a class by themselves.

The Marshall Monitor II ANC look to be very well-built from quality materials. The ear cushions are easily removed and replaced if and when they wear out, and Marshall backs these headphones with a one-year warranty. I suspect they’ll last for many years if well cared for, though the lack of a hard-shell case means you should pay attention to how they’re packed.

Yes. If you want a set of premium wireless ANC headphones with a unique style and a sound signature that favors high-energy music, the Monitor II ANC will make you very happy.